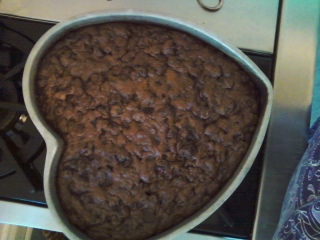 Here are the richest, most evil brownies you will ever eat. They’re quick to prepare as long as you soak the cherries in advance. I keep a jar of cherries soaking in whisky at all times. So at least one night before you bake, and up to weeks or months beforehand:

Pack the cherries into a jar that has a waterproof lid. (I use a plastic jar that used to contain a pint of ice cream.) Pour in enough liquor (or syrup & water mix) to cover the cherries. Seal tightly. Refrigerate at least overnight. If you’ve really screwed up and forgotten to soak your cherries, put the jar uncovered in the microwave oven for 1 minute. Cover, shake, repeat warming without the cover, until the cherries are quite warm to the touch. 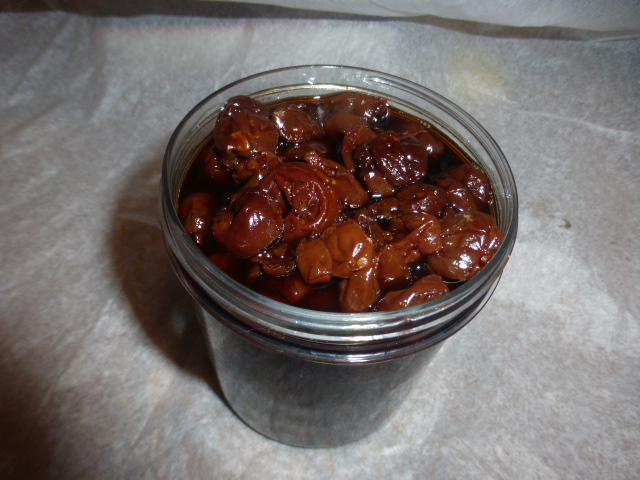 The day you bake you will need:

Preheat oven to 325 degrees F. Put butter in baking pan and put baking pan in the oven while it preheats, until butter melts. I use a giant heart-shaped pan, but a 9×13-inch pan also works.

While the oven preheats, microwave the cherries on high for 1 minute, then drain, reserving the liquid. You should have about 2/3 cup of cherry-infused liquid. If not, add liquor or warm water to make 2/3 cup. Dump the cherries and liquid back together into a bowl.

Mix both brownie mix sacks in a separate bowl with the bag of dark chocolate chips.

Dust inside of the baking pan with cocoa powder. This uses a lot of cocoa, maybe 1/2 cup. If there’s extra cocoa powder in the pan, dump it into the brownie mix. It’ll make a mess, so do that over the sink.

Beat the eggs separately. Add the beaten eggs to the melted butter and cherries and stir until until well mixed.

With the minimum number of strokes, stir liquid ingredients into dry ingredients–only 10 to 15 slow strokes. It’s okay if there are a few patches of dry brownie mix dusting the batter here and there.

Dump the batter into the pan. It will be super thick and chunky. Spread it out flat with a spatula. Sprinkle with more coarse sea salt. Bake 45 minutes in a convection oven, or 55 minutes in a normal oven, 325 degrees. The brownies will be soft to the touch in the center when done. DON’T OVERBAKE.

Cool at least 15 minutes. The brownies will still be fabulously gooshy and warm after cooling for 15 minutes. If you want the brownies to be firm before you cut them, cool 2 hours, or refrigerate, but be aware that the colder they are, the harder they’ll be to cut. The extra chocolate chips harden in the fridge.

Eat them warm for a terminal chocogasm, alone or with ice cream and a glass of red wine. Have a friend handy to take them away from you after you’ve eaten a pound or so. It eases the guilt.