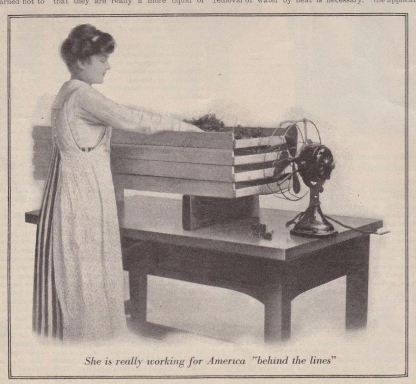 With the clarion call to American women to save food at home so that the starving of Europe and the troops fighting the Kaiser could be fed, 1917 could be called the year of the canning jar…sort of.

It started in the spring. American women were exhorted to plant gardens and preserve their crops, and by July, the women’s magazines blossomed with advice: July’s McCall’s article “Uncle Sam’s Kitchen Brigade” gave a detailed list of how each type of garden bounty could be canned, both fruit (apricots, plums, berries, and cherries) and vegetables (bean, peppers, asparagus, cabbage spinach, cauliflower, carrots, and beets).

The Independent featured an article on dehydrating foods in June as did The Ladies’ World Magazine in August which suggested dehydrating foods–including leafy greens like spinach– to preserve them (as the lady above is doing, with wire mesh trays and a house fan!) for a very practical reason: because of the success of the canning campaign, there was a national shortage of canning jars! The Ladies’ Home Journal included an article about “the new containers”, primarily different types of coated paper–the forerunner of our paper milk and juice cartons today. 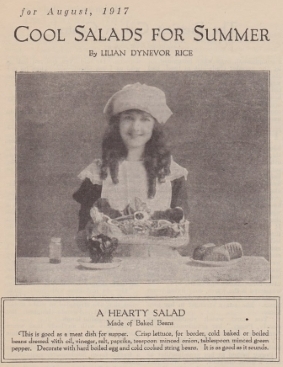 In addition to all the encouragement to can, preserve, and dry, American women were also encouraged to change the way their families ate. Based on the number of articles and recipes published about salads this summer (in Women’s World and The Modern Priscilla in particular), I have to wonder if anyone actually ate them before 1917.  The salad was a somewhat different creature from today’s greens and chopped veggies: it tended more to be a collection of foods mixed together and served cold, thereby saving cooking fuel and using up not only the garden’s bounty but also anything else that happened to be lurking in the icebox.  How can you resist a tasty Baked Bean salad, presented by such a fetching young lady?