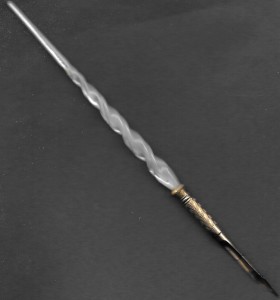 If everybody’s participating in National Novel Writing Month, then why aren’t I?

When NaNoWriMo began, about fifteen years ago, it was marketed for beginning writers who couldn’t finish a book. All of us who have tried to write a book have heard about the people who get a “Wonderful Idea” ™. They plunge into writing their marvelous and unique concept for a book. They write page after page and spend most of their waking moments living with their characters and twisting the plot. 10,000 words spill from their brain without much difficulty. Maybe they hit 20,000 words.

And then… and then they reach the hard part, what many refer to as The Muddle In The Middle Blues™. The writer hits a blank wall. They do not know what happens next. Been there done that. I have managed to work through it and finish the book.

Our beginning writer has to stop writing long enough to think about it. And in thinking about it, then they come up with their next “Wonderful Idea”™. And so they abandon the first book and start another.

Lather rinse repeat. Years into their writing career and they have never finished a book.

Enter NaNoWriMo. The idea is to commit to writing 50,000 words during the month of November. They have a web site where you can register your commitment. Online you can track your daily progress, meet people near you, and you can arrange weekly meetings to compare notes, share woes, and endure the peer pressure of applying butt to chair and hands to keyboard and finish the book. At the end of the month you go back to the website and enter your word count for the month. If you have reached the magic number of 50,000 words—close to the minimum to be considered a book—you get a Winner sticker you can post to social media. You have achieved something wonderful in the world of writing.

No one expects a writer to produce a finished, polished, publishable novel during NaNoWriMo. You have permission to write dreck just so you get the words down. But you have a big chunk of a novel that you can work with, and having written so much of a single project, hopefully, you lose the compulsion to abandon it in favor of the next wonderful idea. You may need to let it sit and ferment a bit before diving in to the second draft, or completing a first draft if 50,000 words isn’t enough to tell your story.

You are a step closer to your goal to have a book you feel proud to submit to a publisher.

So why don’t I do NaNoWriMo?

1)I don’t have trouble finishing a novel. I’ve already published 49 (10 of them when I first became aware of NaNoWriMo) and am working on #50 with plans to finish the rough draft around the end of January. I’m also researching #51.

2)November is a horrible month to make that kind of commitment. Those of us in the SF/F genre plan our year around the convention circuit. My local con, OryCon, usually happens the 2nd weekend of November. That’s 3-4 days on the run, being on stage 24 hours each of those days. Can you say exhausting? Keeping to a commitment of 16-1700 words a day often means getting up at 5AM to write before the con starts at 9AM or whenever you have plans to meet people for breakfast, after having been up late making the rounds of the parties and con activities.

3)November is also the time of an important family oriented holiday. No time to write when you need to spend 3 days in the kitchen preparing food for the gathering mass of relatives and their +ones. If your family is like mine, it also means sending various members to separate rooms to keep the fights to a minimum. Who has the time or emotional stamina to write?

5)Most Novembers I seem to be editing a final draft, reviewing page proofs for a different book, and drafting a proposal for yet another. NaNoWriMo comes at a most inconvenient time of the year. Better for me if I did it in February or March.

Still, in 2020, I found myself in the position of working on a first draft of a book at the end of October. I did not join NaNoWriMo, but I made a commitment to myself to write 1000 words a day for 30 days. I needed the personal pressure to get myself through the Muddle In The Middle Blues. And I did it, despite all the interruptions. Thanksgiving involved just my husband and myself with a cooked meal from Safeway. The con was very low key, the first post-pandemic gathering with about ½ the membership. I did it. On December 1, 2020 I looked at my word count. I’d added 40,157 words to the book. I’d started the month with 19,578 words. The end was in site. I knew who done it, how done it, and why, so no more stopping to figure it out. I finished Dandelion Twist by the end of January, had it in production by the end of April for a September 2022 release.

NaNoWriMo has value. It’s just not for everyone. Think about it for next year, plan for it, let someone else do the cooking. If it’s right for you, you’ll know within a week. You have lost nothing if you bow out. But also look at your own track record. Do you need it?

Only you can know.

2 thoughts on “NaNoWriMo: Everybody’s Doing It”