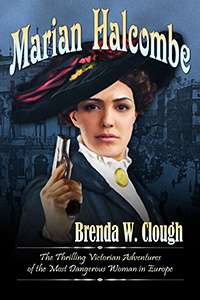 Miss Marian Halcombe returns from the pages of THE WOMAN IN WHITE for Victorian adventure!

The redoubtable Marian Halcombe first burst onto the world in the 1860s in THE WOMAN IN WHITE. Refusing to rest on her laurels, she goes on a life of love and adventure in pure Victorian style.

WHAT READERS ARE SAYING ABOUT MARIAN HALCOMBE

Just last night finished reading Marian Halcombe: The Thrilling Victorian Adventures of the Most Dangerous Woman in Europe, by Brenda W. Clough, and I had such a good time! The steadfast alliance between Marian, the dangerous woman of the title, and her more decorous sister, Laura, is a delight, as is the growing consternation of the men – hero and villain alike – as they come to realize just exactly what – who! – it is they’re dealing with. The book’s voice is pitch perfect, which adds to the fun. I’m in for the next one.
– Sharon Lee, co-author of the Liaden Universe® novels

It’s a sequel to The Woman In White – but it’s so much more than that. This is a bodice-ripping yarn, a Victorian melodrama with a modern sensibility, a delightful romp, a thriller and a romance and a comedy of manners all at once. I adored it.
– Chaz Brenchley, author of Three Twins at the Crater School

Brenda Clough’s invincible and endearing Marian Halcombe Camlet easily enters the company of Jane Marple, Miss Maud Silver, Pamela North, and Prudence Ford as a British female sleuth in the mid-1800s. The Marian novels are an absolute joy to read.
– Paul S. Piper, author of The Wolves of Mirr

A ripping yarn! Thrilling, lushly Victorian, with a dashing heroine who is not even handsome, yet she bags a delightful husband – not without considerable heroic effort and derring-do – and upholds the finest traditions of pure womanhood! (Well… kinda pure.)
– Jennifer Stevenson, author of Local Magics

Get Marian Halcombe FREE at the  BVC bookstore

Buy the print edition of Marian Halcombe at Amazon

I start this new volume of my diary rather early! All orderly minds would agree it would be more proper to begin next week, on the first of January. But what is to be done? My dearest sister Laura’s gift to me was this most wonderfully handsome blank journal. It is far more grand and expensive than my usual run of black cloth-bound Letts volumes. This book’s luscious blue Morocco leather cover smells divine, simply begging to be opened, and the sleek cream-coloured paper implores the pen’s ministrations. So, I must begin.

Let me start this new volume as is proper for the New Year, with a report on all our household.

Baby Walter – Wally – is now quite the young man! Almost five years old, my darling nephew is teethed, breeched and walking and climbing like a young monkey. His mother has been teaching him to pick out simple tunes upon the piano while I undertake the sterner task of introducing him to his letters. Alas, too often our alphabet blocks are requisitioned to become fortresses for his toy soldiers. But he grows in intelligence every day, the light of the household.

His sire, my brother-in-law Walter Hartright the elder, has devoted his energies to mending fences with all our neighbours. During the residence of Laura’s uncle the late Mr. Frederick Fairlie social martyrdom reigned. Relations with all the county were at best suffered to fall away to nothing. When Mr. Fairlie had the energy, or folk were so foolish as to actually call, he did not hesitate to offer direct insult. But now under Walter’s head we have rejoined the community. We occupy the family pew in Limmeridge church; call and are called upon, dine and are dined with. Though he is an incomer to the district, and not born to the gentry, he has been so well received that there is talk of Walter standing for Parliament when the current incumbent Sir Cedric Gratham retires year after next. But when this is suggested he brushes it aside with a laugh, saying that his old friend Professor Pesca foresaw it, and therefore it cannot be.

But my happiest news is of my darling Laura. My sister could not thrive, all the years we lived in humble circumstances in London. Transplanted back to her native northern soil, surrounded by love and kindliness, Walter and I hoped she would gradually bloom again. How foolish we were, and how little we knew of her greatness of soul!

For what dear Laura needed was to serve others. Poor and ill, she could come to no one’s aid. How well I remember her desire, even though she was barely restored to health, to assist in earning our daily crust!

Now, chatelaine of Limmeridge, she is come at last into her own. She is the fond patroness of the village school, as our mother was before her. Mr. Frederick Fairlie had an abiding horror of children, but now he is gone we have revived the parish fête, giving over the garden and shrubberies once a year to the great benefit of the church.

And, thus nourished, Laura’s energies and spirits have grown wonderfully. She is indefatigable in visiting the poor. If there is a lying-in or a sick child within twenty miles, young Mrs. Hartright is there on the instant with calf’s-foot jelly, or some arrowroot, or a basket of baby linens. Already she is the acknowledged mercy angel of the district; I doubt not that before she dies she will be elevated to the rank of saint.

To see my dearest sister, the person I love most in all the world, flourishing like this fills me with joy. And, with another one on the way she, and I, look to be happy and busy for years to come. So when she gave me this volume – oh, I must write it plainly and in order! Let me go back a little.

We were a merry party for Christmas. Walter’s elderly mother and his sister Sarah had come up from town, escorted by his old friend Professor Pesca, the Italian tutor. Little Wally had received a stick horse for Christmas and was galloping and shouting up and down the halls.

Little Professor Pesca wore a silver basin on his head, a veritable Quixote, and waved a napkin for a banner. He pelted along behind on his short legs, singing some Italian patriotic anthem at the top of his lungs. Walter himself, between paroxysms of laughter, bestrode a dustmop liberated from a startled housemaid, bringing up the rear. Was it the battle of Waterloo, or the charge of the Light Brigade? In any case the noise was immense.

“At least your floors are becoming cleaner,” Sarah noted. We were observing from the safety of the stair. Old Mrs. Hartright sat on the landing and wiped tears of laughter away and Luna, Laura’s pet miniature greyhound, trembled and cowered against her skirts at the tumult.

Laura smiled fondly down at husband and son. “I assure you, Sarah, that is the last thought in any of their minds. But, dear Marian, I almost forgot. I have a gift for you.”

“What, in addition to Mrs. Yonge? We will begin reading The Daisy Chain aloud in the new year.”

“Yes, yes. But come through into my sitting room. Wally’s voice is so carrying.”

We went into her little room, the same chamber that has been the scene of so many important conversations in our lives. We sat on the sofa by the window, which looked out over the wintry garden. In the watery sunshine Laura looked more happy and healthy than I have ever seen her. All the grace and affection of her character from girlhood were blended now with the mature and intelligent gentleness of a woman. She has fulfilled and grown into all her promise; the beauteous rosebud, darling of the garden, is in full fragrant blow. “Love and happiness is good for you,” I burst out. “I have not seen such bloom in your cheeks since we were girls.”

“And that is what I wanted to say to you, my dear Marian. You will remember, always and forever, that I love you, won’t you? And that your happiness is essential to my own?”

I was startled. How could there be any doubt of it, after all we have been through? It is family policy to never speak of the past. “Laura, is something wrong?”

Get Marian Halcombe FREE at the  BVC bookstore

Buy the print edition of Marian Halcombe at Amazon