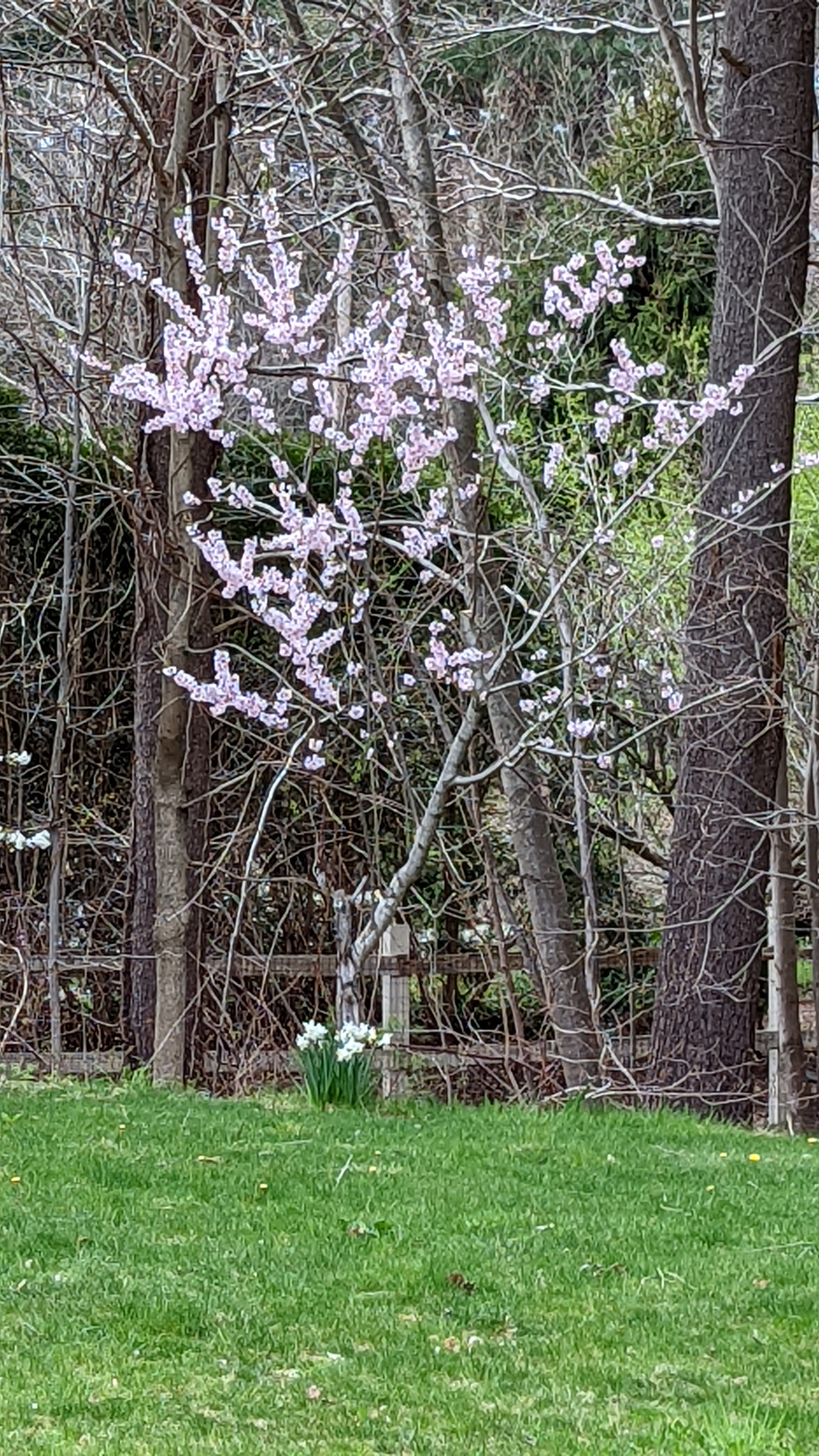 (Almond from our back porch.)

It has been a long winter.

That said, this winter has been mired in external things: the state of the country, the fear of infection, the loss of contact with coworkers, friends and family. Over this winter, we have grappled with how to have a meaningful, fulfilling conversation, delving into matters of conviction and humor, over zoom.

I attended the February Boskone in person. That was—to me, at least—a nightmare. Not because seeing people wasn’t welcome or spending time with actual human beings wasn’t something I craved, but because I had to do it with all of those same issues: fear of infection, wearing a mask, limiting social distance.

None of that has anything to do with the farm. But it serves as a context within which or farm activities take place.

We’re worried about upcoming food issues. Notably drought in the Midwest and far west and the war in Ukraine. While Ukraine’s wheat mostly supplies Africa, nothing in the modern world is unconnected. It’s not at all clear how the food production industry is going to respond. Does that mean as wheat consumers we’re now competing with Africa? Will compassionate wheat supply drive up prices here at home?

The percentage of allowed ethanol in fuel has now been increased—which, again, puts food and fuel in competition with one another. I have thought this was a problem since day one. Ethanol as a fuel supplement: good. Ethanol production from carbon intensive corn such that the ethanol is carbon positive: bad. Putting farmers in a position of getting more for their corn as fuel than as food: bad.

For a while, we’ve been trying to bring in enough calories from our meager acreage to make a difference to our bottom line. We do fairly well producing crops that don’t have a strong impact on our caloric intake: fruit from trees, greens, etc. We had a significant pollination problem last summer and didn’t get any Cornelian cherries or persimmons at all. The Marechal Foch grapes did well but the Concords caught a fungus I’m still working on. Apples have always been a problem. But we did well with bananas, peaches, and pears.

Calorie crops have been a more troubling matter.

Our main caloric successes have been corn, squash, and potatoes. We’ve done very well with corn and squash. Potatoes have been variable. We were doing quite well a few years ago but in the last two years, when we lost our outdoor cat, we’ve been overrun by rodents and bunnies. Last summer we tried to increase our bean harvest and lost it to the rabbits. The potatoes were lost to mice and and the strawberries to the chipmunks.. I could strangle Chip and Dale with a clear conscience. We did well with corn and squash, though. We’re finishing leftover squash and still have jars of dried corn.

So, what are we doing this year?

Let’s start with the fruit.

You may recall how we lost all of our plums a few years ago to black knot. This left one of our espaliers completely vacant. We’ve been letting it set fallow all that time, though we did plant strawberries in the space. (See my murderous plans for Chip and Dale above.)

I’ve been experimenting with quinces that last few years. We had a quince that came with the house and the original produced fruit regularly. But, since it is in the potential lead field of the century+ old house, we haven’t eaten any. So far, transplants haven’t wanted to reproduce. We did get some success with a pineapple quince I planted about six years ago. It produced very tasty fruit.

The quince is a strange fruit. Many varieties are picked hard and left to soften or are cooked. They have quite a nice taste. Best of all, they are immune to most of the diseases of apples, pears, and plums. So, this year, we committed to repopulate the espalier with four new, and reportedly tasty, quince. I planted them yesterday, bare roots and all. We will see.

We have four grape arbors. The Concord and Marechal Foch arbors are on the middle to north part of the property and the other two arbors are on the southern part of the property, down closer to the road. Except for the Concord fungus, the northern arbors have been rocks. The vines are thick and woody. However, I’ve had trouble with finding the right variety to fit in the southern arbors. We have two seedless varieties down there that are… okay. They are still young but not producing much. We will see.

I also tried Einset grapes—a seedless grape that has wine capabilities. It seemed to die back two winters ago and then came back aggressively last spring. That struck me as odd. I tasted the grapes and they tasted mysteriously like Concords—not the described Einset flavor at all. When we bought them, they were listed as zone 5. Subsequent investigation on other sites has them listed as zone 7. We are zone 4-5. My suspicion is they are a grafted grape and the winter killed the Einset part and left the graft base to grow—which, I think, is a Concord variation. I was going to pull it up—I have a Concord—but the fungus has given me pause.

The fourth slot on the southern arbors is vacant and we’ve ordered a Somerset to fill it. This is a grape hardy to zone 3 so we have good hopes.

I said we had four arbors. We had five but pulled the weak and spineless grape out from it. We’re replacing it with two vines: a Doctor Yao Climbing Yam Cinnamon Vine and the Eastern Prince Schisandra Vine. This is sheer whim. A hardy yam on one side of the arbor and a Russian sweet fruit on the other. What the hell.

We tried plums again on the other side of the property, far from the plum espalier we had to tear down. Both plum varieties were black knot resistant. Both of them got it so we pulled them out.  We replaced them with two jujube (Chinese date) trees. I had some jujubes in China and was quite taken with them. But we won’t be seeing any harvest for a bit.

Some efforts we’ve done in the past are bearing fruit. (Heh.) The new pears from a few years ago are showing flower buds. Last summer, we had a few fruit on the new peach but Chip and Dale got to them before we did. A self-fertile kiwi may be flowering this year—which is good news. Most kiwis are male/female. We planted a pair a few years ago and the female didn’t make it and the male likes to tear apart fences. So far, I haven’t been able to kill it.

We have a hardy passion fruit (Maypop) that is established. We have had no fruit as yet but we’re hopeful.

The rest of the fruit trees have blossomed or are about to blossom. The weather seems to be cooperative for pollination and we went ahead and purchased orchard bees. We’ll know in a few weeks. Last year we had paw-paws for the first time and they were fantastic. We have more flower buds this time between two of the four trees and the other two appear to be established. The paw paw fruit is fantastic.

We’ve planted sugar beets and peas already but nothing has come up yet. I’m a little concerned we either planted them too early or the seeds were bad. I’m going to take some sugar beet seed and plant them in peat pots and see if anything comes up.

The corn is growing in sets—we developed a technique for pre-growing corn a few years ago using peat-pots. The common wisdom was that you couldn’t transplant corn. But if you pre-grow it in a peat pot and plant the pot, the corn doesn’t seem to care.

We planted the carrots, turnip greens, broccoli rabe this weekend.

We’ll be planting potatoes and corn, along with squash and beans. We’ve gotten some chicken wire with which we’re going to line the main garden and hope the bunnies will be kept at bay. We lost our beans to the bunnies last year. Bugs Bunny must die. My sympathies lie completely with Elmer Fudd.

We’ve purchased a very tall raised bet kit from Birdies which we saw being used on Self Sufficient Me. That is still a work in progress.

I tilled the garden this year and we plan to amend the soil with chips from a tree we’re dropping. We’ll be laying it out in the next week or so.

I’ve gone part time this year and so most of the garden burden will fall on me. Planting the quinces (and digging up the old stumps) was hard on me. I’m trying to figure out more efficient (and less taxing) ways to do things. It has been impressed on me that I’m not getting any younger.

That’s it for the farm report.