This month marks the 105th anniversary of the US’s entry into World War I…a topic which I happened to do a lot of research on for my YA fantasy What Lies Beneath. In observation of the event, I’m reposting a series of pieces I wrote around what was happening on the “home front” during that first spring and summer of the war. 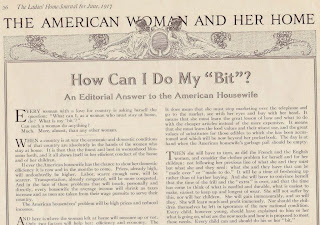 Writing a story set in 1917 has been a fascinating experience for me. It’s not a time I knew a great deal about, so there’s definitely been a learning curve…but I’ve been having  a lot of fun doing it.

One thing that has struck me as I do my research to write this story is how much World War I was truly the first BIG media-covered war (though the Spanish-American War in 1898 was in many ways a rehearsal for it). By 1917 the cinema had become an important part of people’s everyday lives; in the newsreels shown in theaters, moving picture footage of actual battlegrounds and armies could be seen. Also, photography was now more easily reproducible in newspapers and magazine, and both of these served to bring the war “home” in ways that just hadn’t been possible before. And let’s face it, war is big news. It sells a lot of newspapers and magazines, so there was plenty of coverage of it in popular media.

That coverage extended to media intended for a female audience. World War I was probably the first war that called strongly on all American citizens, male and female, to help in whatever way possible. For men, it was enlisting, obviously. But women, too, were encouraged—heck, exhorted, as in the editorial above from the June 1917 issue of Ladies’ Home Journal—to “do their bit.” The countries at war with the Kaiser not only needed soldiers, but support personnel, war materiél, and food to feed their civilian populations. Belgium in particular was experiencing famine conditions as no one could grow food when large swathes of the country formed the battlegrounds of the war, and cross-Atlantic trade had been severely hampered by German U-boat activity.

So in a very real sense, women did have to “do their bit” for the war effort. Since they were the homemakers, they were the ones in charge of purchasing and preparing food…and they were the ones who could cut down on the use of wheat, beef, and other food that could be shipped overseas to feed troops and hungry European civilians, and learn to make do with other food sources.

But food wasn’t the only place women helped. Since so many young men were being shipped overseas to fight, young women began to replace them on farms and in factories. And let’s not forget medical personnel and other support people, from clerks and secretaries in Washington to ambulance drivers on the western front. Over the next few weeks I’ll talk a little more about how young women “went to war” in World War I.