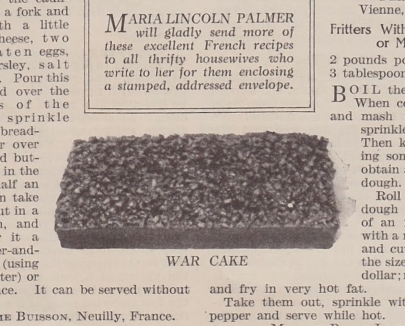 With the entry of the US into World War I, voluntary food conservation came into being in order to not only provide food for American troops heading over to fight in Europe, but also relieve severe food shortages for European civilians. The Food Administration encouraged homemakers to be frugal and to do without; the women’s magazines jumped in and began to publish recipes that reflected the new frugality.

And so this week, I present…recipes! I haven’t tried any of them yet, but I think I might try this first one some time because….well, chocolate and potatoes? Carb heaven. It’s from a Royal Baking Powder ad in the July 1917 issue of McCall’s Magazine:

This one (from a Royal Baking Powder ad in June 1917’s McCall’s) is less tempting—I’m not a fruitcake fan—but I just love the recipe name. Makes you jump up and say “yum!”, doesn’t it?

Boil sugar, water, fruit, shortening, salt, and spices together in sauce 3 minutes. When cool, add flour and baking power which have been sifted together. Mix well, Bake in loaf pan about 45 minutes. (The old method called for three eggs.)

And finally, from an article in September 1917’s The Delineator entitled “More French Recipes”, is a recipe from a B. Simmen of Ruschlekom, Switzerland:

Take the granulated sugar and add to it the egg. Then beat together and add the cocoa, cinnamon, and the fresh milk or cream. Add the milk or cream very slowly. Mix in the flour. Dissolve the bicarbonate of soda in one tablespoonful of melted grape jelly.

Butter a high baking-pan, as this dish bakes better in a high pan rather than a shallow one.

Shell some nuts and put them over your cake. This dessert is inexpensive and will keep for several days.

I rather like how the recipe’s author neglects to mention baking the cake!