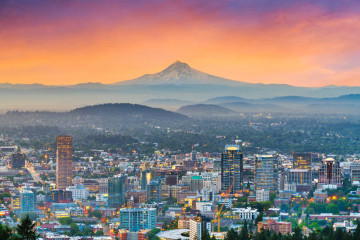 Rumor has it that those of us born in Portland, Oregon have webbed feet and learn to walk with a flutter kick.  Truth be told we have about the same number of inches of rain per year as New York, Philadelphia, or Boston.  However, we have more days of rain and more days of cloud cover, so it appears that the Pacific North Wet comes close to drowning.  But it makes for spectacular roses.

All those gray days mean that coffee roasters and brewers thrive in Portland.  Aficionados of the brew don’t describe the aroma, the uniqueness of the beans, or free trade organic versus plantation beans grown by corporations with chemical fertilizers.  No.  They describe the lifting of the weight of the clouds…

Unlike Seattle, our sort of neighbor to the north, we don’t have a coffee house on every corner, they only take up every other corner.  The corners in between house micro breweries.  Fresh grains and hops from local farms make it a beer lover’s paradise.

Portland is often called Bridgetown.  The Willamette River (that’s will-am-ette not wila mettee) bisects the city, dividing it east and west.  Nine bridges cross the river.  Major business grew up on the arteries that feed those bridges.  During our Rose Festival in June, we have dragon boat races on the river.  We have rubber ducky races as well.  Distance in downtown is measured from bridge to bridge.

Rising above downtown are a series of volcanic ridges covered in wonderful evergreens, mostly Douglas fir and western red cedar.  We’ve reserved 5000+ acres within the city limits on those hills as a city park, Forest Park, and preserved most of it as wilderness.  We also have the smallest city park in the US.  It’s 2 square feet of green in the middle of an intersection so the Leprechauns can hold slug races.

Portland is not a huge city like New York or L.A. or Chicago.  We’re quite comfortable keeping the metropolitan population around 2 million.  That includes suburbs from five counties and two states.  Vancouver, Washington lies just across our other great river, the Columbia, and is trying very hard to maintain their own identity, but that’s a little hard when over half their population works in Portland.

Newcomers often remark that Portland is an incredibly clean city.  When you can find trash cans conveniently placed it’s easy to deposit your trash there instead of dropping it on the street.  We were one of the firsts states to impose deposit and refunds on pop cans and beer bottles.  Now we’ve extended it to plastic water bottles.  Even if tourists are careless, kids will pick up the cans to supplement their allowance.  And then there’s all that rain to wash the streets clean.

Music, art, and theater thrive in Portland.  Offerings range from high opera and a world class ballet company to grunge street bands and spontaneous street performers, sprinkled with ethnic music and original…um…sounds.  Audiences frequently jump up in the aisles of the theater to dance exuberantly.  Highland Games and Science Fiction Conventions, Greek Festivals and Cinqo de Mayo, live action role playing games and vampire clubs. Don’t forget the outdoor Jazz and Blues Festivals with more costumes and spontaneous dancing.  We have it all, and the costumes spill over into every day life.  When “America’s Got Talent” held auditions in Portland, the judges openly proclaimed Portland to be the weirdest city they’d ever visited.

We have traffic jams, a homeless problem, and crime just like any other city.  We also have a town full of bridges, breweries, spontaneous art, good restaurants, and a lot of people who love our city with all its quirks and beauty.

Phyllis Irene Radford is a founding member of the Book View Café.  Though raised in the seaports of America she was born in Portland and has lived in and around the city since her junior year in high school.  She thrives in the damp and loves the tall trees.

Or her personal web page ireneradford.com