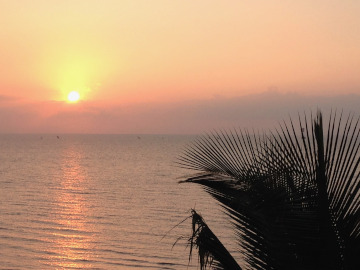 It is March, 2017. I am in Mozambique—Maputo, the capital city to be precise—at a fancy hotel on the beach. Beyond this deck the Indian Ocean laps the shore like a contended cat at a bowl of milk. My colleagues have left the building on a tour of the city. I have seen the city: the Maputo Train Station (3rd most beautiful in the world after Paris and Pancras); the Cathedral, Catedral de Nossa Senhora da Imaculada Conceição, Cathedral of Our Lady of Immaculate Conception, (vertical stained-glass windows be-jeweled by the sun). Our driver does a sort of genuflect before the altar, then proudly points us to the alcove of Pope John Paul II, who visited in 1988; The Iron House, so-called for the Savannah, Georgia-like iron railings; The Municipal Market, with rows of vegetables and fruits, and a hair market, adorned with falls and wigs and extension, to feed the African love of highly-decorous hair. For lunch a beach-side restaurant where we can pick out our fresh (still-squirming crabs or lobsters, and spitting clams) for our lunch. We choose prawns and barracuda.

Everywhere we go, everyone we talk to, wonders how our country could have elected as president a billionaire with orange hair and a tweeting thumb. They speak to us in perfect English, to each other in Portuguese, and likely, at home, in Bantu or Tsosa or one of a dozen other tribal languages.

Here all is tropical paradise. Out there, in the CD hinterlands, is poverty: corrugated-roofed shacks, red-dirt roads, children skittering through the road playing roll-the-abandoned-tire. Little market carts of coconut and onions. Men’s bars and seamstresses. Never sure there will be enough food for all the family that day. Open sewers. Beggars on the beach, dancing for pennies, selling stiff colorful Mozambiqan cloth. I am here on the business of training and supporting brave clinicians trialing the HIV vaccines we hope will bring The Cure.

Like many African countries, Mozambique has seen strife. Famine, killings, war. Ancient texts tell of Arab and Roman traders acquiring ivory and gold, and slaves. It is said the word “Mozambique” is derived from the name of the Arab sheik who ruled the eastern African coast around the first century CE.

In 1498 the skill of Portuguese sailors rivaled those of the Spanish. That year, when Vasco da Gama rounded the Cape of Good Hope, he sailed into Maputo Bay and recognized the importance of this thriving mercantile area. The Portuguese did not prefer to conquer in a military fashion, but instead established private and profitable holdings. In due time they overran the Arab enterprises, however after two years the Arabs returned, in force. Arab trading influence in the region forced the Portuguese to begin to cut their losses, and by the 19th century sold much of their holdings to the British.

A series of civil wars brought to power first to a leftist regime with a goal of social programs and education for the majority black citizenry, assisted by the Cuban military. This cemented Mozambique independence from the Portuguese in 1976. Pushback from dispossessed plantation owners resulted in a following civil war, and after 10 years of violence, the flight of thousands to neighboring Zimbabwe and South Africa, and famine, in 1992, Mozambique achieved a stable government For now.

The city of Maputo is a hodge-podge of Portuguese, communist-era, and gaudy Chinese architecture. I didn’t see a single building bearing an Islamic style, even though Islam was the dominant belief system in the region for centuries.

For a fascinating look into modern exploration of Mozambique during the current period of relative peace, click here for a story of Mount Mabu.

1 thought on “The Reluctant Traveler: Mozambique”