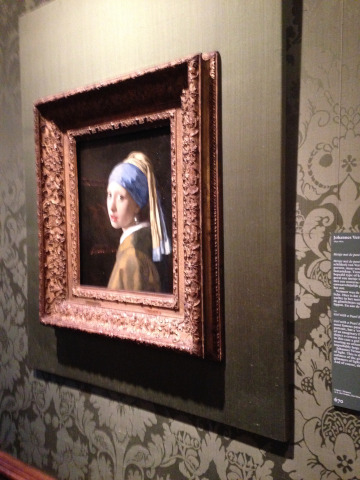 We passed a cello-maker. Since my husband once played one, I took a photo for him. The canals—of course there were canals—glistened like steel under the gray skies.

Hannah’s gift of navigation paid off, and we found ourselves entering a broad plaza around which straight-up Dutch structures housing Holland governmental bureaus. Pointing fingers showed the way. The only problem was, there was no indication of which housed the museum. We wandered through a gate toward a church, reversed directions, and going through an iron gate and asking a security guard standing in front of a lavish, mustard-colored mansion.

Of course, this was the Mauritshuis. (Maurice House is the English translation, according to Wikipedia.) It was originally the house of John Maurice, the Governor of Dutch Brazil. Imagine the Dutch in Brazil. They did get around back in the day.

The entry was to the side, down stairs that sank below the level of the canal. Through a gap in the wall we could look on the water, dotted with bits of trash.

After purchasing our tickets, and having our purses scrutinized by a guard, we took the stairs up to the museum. My Belgian colleagues had called out the jewel of the art museum: Vermeer’s Girl with the Pearl Earring.

The Flemish school of painters flourished on and off from the 15th to the 17th Century in the Low Countries along the North Sea. Vermeer, Rembrandt, Rubens, Brueghel and more. The best known works are Girl with the Pearl Earring, The Anatomy Lesson of Dr. Nicolaes Tulp (Rembrandt) and Rubens’ Night Scene.

These were all astonishing, but what I found myself obsessed with were the still lifes.

In the dozen or so I studied, all floral arrangements that the Dutch painters were admired for, I discovered an interesting similarity. There was a central vase loaded with oriental lilies, tulips, peonies, roses. On the table top on which the vase was placed, were more objects. As you face the painting, there was always an insect on the table to the right, and a fallen stem or bloom on the left.

The arrangement was the same, but the contents differed. There were always flowers, but the insect prop could be a beetle, lady bug, butterfly, honey bee. The fallen stem may be a flower, or a leaf, or fruit, but the composition rules were strictly followed.

The interior of the Den Haag cafes were jammed with folks in the late afternoon. I wished I had stopped in one for dinner, since the Hilton restaurant was getting tiresome. Next time I stay on the train into Amsterdam and find myself a beer hall. Although my Belgian friends tell me Belgium has much better beer.