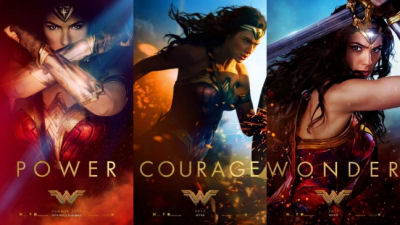 In 2017 I heard a great deal about the new movie, Wonder Woman, based on the old DC comic. All over Facebook, everywhere I looked, people were kvelling over it, so I figured I’d better go see it before I heard so much there was no longer any point in buying a ticket. Particularly since the buzz I was hearing was exactly the opposite of what I’d expected to hear. In my lifetime, “strong female character” usually meant “scantily clad sex goddess.” Where breasts were freakishly oversized and impossibly perky, and waists were too narrow to pass a pea. I expected this Wonder Woman to be no different from the smattering of comic book heroines who had gone before. But instead what I was hearing was, “Nay, nay, she’s not like those others!”

I was skeptical, even though these reports came from many I respect and trust on this. Esther Friesner. Jennifer Roberson, women who know from the Fantasy genre. I’d been burned too many times before. Comic books and superheroes had always been aimed at hormonal teenage boys.

I take you back to 1966. Star Trek. The much vaunted, ground-breaking, women-and-minorities-on-the-bridge show. The one with a pilot show that had Barrett playing the second-in-command. But by the time the series had been revamped with a second pilot, then was picked up and aired, she’d been swapped out for a man. Relegated to the sidelines as a nurse who had a crush on that man. Where all the women on that bridge wore mini-skirts and cleavage as deep as the Snake River Canyon, and all had jobs socially acceptable for women in the mid-twentieth century. Three cheers for Nichelle Nichols, but Lieutenant Uhura was still a telephone operator, Nurse Chapel was, well, a nurse, and Yeoman Rand was a secretary trotting around with an enormous cleavage, fake eyelashes, blonde dye job, and steno notepad. And she had a crush on the Captain. I was twelve and even I didn’t think it all that groundbreaking. Even worse was the final episode of the three-season series, “Turnabout Intruder,” in which Captain Kirk’s body was taken over by a former lover who wanted to be a man. The moral of the story being the eternal question as posed by the captain, “Why can’t women just be happy as they are?” I adored Star Trek, and felt horribly betrayed by it. I wanted to be able to do things without being told that, “Nice girls don’t…” I’ve known my whole life I wasn’t a nice girl, and Star Trek went boldly nowhere for me.

In the decade following, 1976, I was excited to learn of a new adventure series about female investigators. I thrilled at the idea of women going out and doing things. Kicking butt and taking names. Fighting crime. Being applauded for using their brains and brawn.

You know who I’m talking about. The night Charlie’s Angels first aired I eagerly planted myself in front of the TV, fully expecting to be vindicated at long last. But as the hour progressed, uneasiness crept in. It was like biting into a bright, red, polished apple and finding it mealy and full of worms. The women weren’t in charge. They were ordered around by a disembodied voice named Charlie. They weren’t all that smart; they were guided by a eunuch named Bosley. They kicked no butt, they took no names. Mostly they ran around with impossibly fluffy hair and absurdly big teeth. At the end of the episode, when a black-suited-and-helmeted figure was revealed to be the blonde one, and she removed her helmet with a flourish and a shake of her head to restore her coif, I was done. Charlie’s Angels was not the breakthrough I’d dreamed of.

Neither was Kate Jackson’s next outing, The Scarecrow and Mrs. King, where every episode ended with a huge fistfight in which Ms. Jackson cowered in the corner, watching Bruce Boxleitner save the day. She made me want to smack her sideways.

That same decade, the Wonder Woman TV series did not attract my attention. Cleavage and hair, dancing not fighting, always for the boys not the girls. I never, ever, wanted to be Lynda Carter, and didn’t watch even one episode.

Moving along, into the era of live-action comic book movies that are all about the CGI, these days I’m old enough to get that these movies are for teenage boys who are looking for a poster to tack to the ceiling over the bed. I’ve spent the past forty years expecting little from female adventure characters. Not that I ever expected a female superhero to be real, I’ve given up hope of ever seeing one who could be credible and share the screen with an equally strong male character. So going into that theatre, I expected little from Gal Gadot.

(We interrupt this post for a spoiler alert for Wonder Woman. Proceed with caution.)

From the beginning of this movie there is no sense of catering to teenage boys. The Amazon warriors all move like warriors, wearing their Greek-ish outfits similarly to the men in 300. These women are athletic enough to make the CGI moves credible. They have muscles that look as if they could do the things they are shown to do. They are attractive, but not all boobs and flowing hair.

Ms. Gadot is a gorgeous young lady, and entirely credible in the role of a young goddess out to save humanity from itself. No smirky, sly, over-sexed bombshell. She is straightforward, has the courage of her convictions, is intelligent, brave, and utterly unaware of the condescension of men around her. She barrels through, full speed ahead, taking little notice of stuffy old men who think she should be at home sewing her trousseau. Sometimes played for laughs, but not clumsily, and her earnestness remains consistent throughout. Gal Gadot plays Diana as full immersion in a personality unaffected by the socialization of sexism. What a joy!

Also, I saw the thigh-jiggle I’d heard about. Yes, Wonder Woman’s thigh jiggled on landing, like a real woman’s would. Her breasts were normal: not flat, not enhanced, not crammed into a Wonder Bra. Her hair was normal. Pretty enough, but never impossibly fluffy and not once did she toss her head to make it flow. Sometimes it was even messy. I wanted to cheer.

Finally, Chris Pine (that fellow who redeemed the role of Captain Kirk) as Steve Trevor, provided a magnificent foil/love interest for Diana. Steve, though often at a loss to know what to say, is the kind of guy unfazed by a woman who is not afraid to do stuff and follow her own conscience. The kind of guy who can fight alongside her effectively as an equal without having to prove himself superior or in charge. Yes, those guys do exist, and they should be encouraged to reproduce.

Please, let’s have more adventure stories like this. It’s too late for me, but I’m certain there’s a generation of girls who will eat this up and go on to do great things.

PrevPreviousThe Rambling Writer’s Quest for Home, part 10: A Roof Over our Heads
NextScientists and Engineers in SFFNext