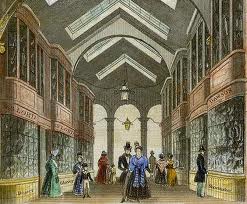 When Lord George Cavendish, younger brother of the 5th Duke of Devonshire (or should I say brother-in-law of the famous Georgiana, Duchess of Devonshire?) inherited one of the family homes in London, Burlington House, he didn’t expect to be plagued with lackadaisical Londoners using his side garden as a convenient dumping ground for their trash. And oh, those old oyster shells begin to reek after a while, as old oyster shells will. So he came up with a novel solution, one for which generations of young ladies bless him.

He built a shopping mall.

No joke. His architect, Samuel Ware, designed a broad covered passage running along his garden wall with an outlet onto Piccadilly. This long (585 feet) passage was lined with 72 small shops which had small apartments above them for the shopkeepers to live in; natural light came in through skylights in the ceiling, visible in the period image above. London was agog at this project and flocked to visit the Burlington Arcade, established “for the gratification of the public and to give employment to industrious females” (though only six of the original tenants were “industrious females”, male milliners and corset-makers who rented shops here were addressed as “Madame”!) The shops were all luxurious ones, featuring the most fashionable, up to date, and expensive merchandise, and any business whose trade could be described as noisy, noxious, or otherwise offensive was not allowed. King George VI’s official gold lace makers had his shop here. 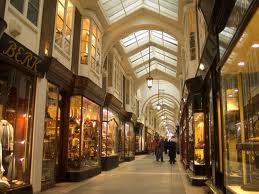 Rules were put in place to keep the Arcade exclusive. Lord George recruited soldiers from his family’s regiment, the 10th Hussars, to serve as guards and enforcers of etiquette. These “Beadles” wore special uniforms and were on hand to ensure the rules of no whistling, singing, playing of musical instruments (to keep out itinerant street musicians), running, carrying large parcels, opening umbrellas, and baby prams. And though their uniform has changed over the years, they’re still there…because yes, the Burlington Arcade is still in existence! Though some of the shops have been combined so that there are now about forty, it’s still open and featuring shops selling luxury goods and now antiques…perhaps some of the items that were once sold there as new.