It’s All in the Cards 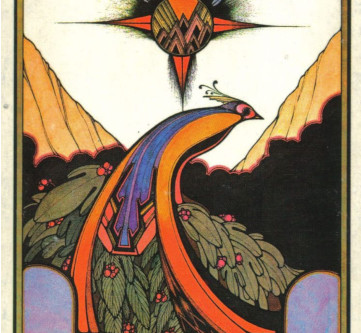 Do you have a tarot deck? I have three, but this in no way compares to friends of mine who own dozens—collectors, maybe, but definitely users of the fortune-telling cards.

I am a pure amateur, but my favorite is the Aquarian Tarot by David Palladini. I don’t know if users agree, even those with many beautiful and imaginative decks, but the Aquarian always seems to give me an understandable story, and feels good in my hands. Perhaps it’s because I have been acquainted with this deck for many, many years; it’s an old, reliable friend.

On a whim some years ago, I bought the Tarot de los Muertos deck by Monica Knighton. The Minor Arcana are whimsically renamed: Wands become Plumas—Pens. Swords are Pistolas—Pistols. Cups have been changed to Ataúdes, or Coffins, and Coins or Pentacles are Rollos—Reels, as in film reels.

I also inherited my sister’s Stuart R. Kaplan deck, the Royal Fez Moroccan Tarot, American version, printed by U.S. Games Systems. The tiney informational booklet tucked into the box with the cards nicely explains the correlation between the Minor Arcana suits and a regular card deck:

The Tarot de los Muertes deck gives even more information about which of the Four Signs each suit is associated with which Sign.

I learned the Celtic Cross method of reading the cards. This, for an amateur, requires a guidebook. For years I used a battered paperback called The Tarot Revealed, by Eden Gray. When that disappeared into the Time Library—that is, books I’ve carted about with me for decades that seem to slip away into an altogether different Time-stream—I bought a used hard-back edition since it had long ago gone out of print.

It’s simple, easy to follow, and demonstrates both the popular Tree-of-Life and Celtic-Cross methods. It gives quick meanings to the cards, both upright and reversed in the layout. I used it to give readings for friends and families. It means adding your own particular interpretation of a card and its meaning, in discussion with the one whose question has been posed to the cards. The card deck the book is meant for is the famous (to tarot card experts, I believe) Waite-Smith deck by mystic E.A. Waite, and illustrated by Pamela Coleman Smith, but it can be used for any deck, in my opinion.

2 thoughts on “It’s All in the Cards”