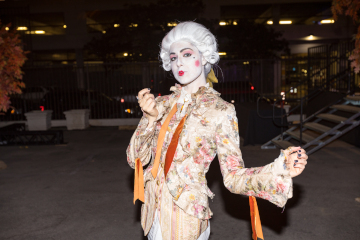 In earlier decades “dress up” and “let’s pretend” were favorite games of mine.  My girlfriends and I could explore growing up, or reinventing ourselves, or becoming for a few moments a princess, or a frog, a brilliant professor, or even slovenly monsters.  Most of these games took place in secret, behind closed doors.  We were too embarrassed to admit to narrow-minded parents that we wanted to belong to a different family, in a different time, with a different reality.

We started early with grandson #1.  At age 8 months he debuted at Baycon and won a prize at the masquerade.

The only time we were allowed to wear costumes in public was if we were engaged in stage productions—yeah I loved ballet as much for the costumes as the dance.

Society for Creative Anachronism and Renaissance Faires came much later in my life.  Along with Highland Games.  Science Fiction Fantasy Conventions came even later.  People now have many outlets for putting on a different persona, or reality through costuming.

The Red Hat clubs are even a form of costuming.  Donning a red hat and purple clothes, (fashion taboos for generations) gives women permission to break strict social boundaries and conventions.

I found the opportunity to wear one costume during the years I worked at an historical museum.  I even found a very distant relative in the portrait behind me.  My mother insisted I looked just like the 2nd wife of William Clark of the Lewis and Clark expedition.  We share a maiden name anyway.

So until I grew up and learned how mentally healthy breaking some rules like no costumes in public can be, Halloween was really big deal for me.  I worked hard to make costumes for me, my son, and later my grandsons.

So this year, be a bit outrageous.  Dress as you please on Halloween and explore the possibilities of “Let’s Pretend” in your own mind.