Did They Really Say That? 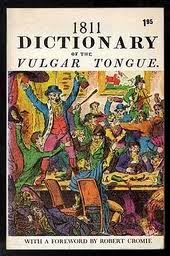 One of the joys of leafing through the 1811 Dictionary of the Vulgar Tongue is running across slang expressions and figures of speech still in use today that you would never guess were particularly old…but as it turns out, are. Here’s a list of the ones I’ve run across, along with their definitions as listed in the DVT, that make me laugh…and marvel at their longevity. Enjoy!

Sea Lawyer: A shark  (Yes, really!  This reminds me of an anecdote I ran across in an 1825 version of Reader’s Digest.*)

Coming!  So is Christmas: Said of a person who has long been called, and at length answers, Coming! (We use this all the time in my family, so it totally tickled me to find it here.)

Birth-day Suit: He was in his birth-day suit, that is, stark naked. (Okay, this one totally surprised me—it just doesn’t sound old, does it?)

Black and White: In writing. I have it in black and white; I have written evidence. (Another very modern-sounding expression—maybe because we have a picture in our 21st century heads of 19th century paper being brownish rather than white?)

Kick the bucket: To die. He kicked the bucket one day; he died one day. (I did a little research on the origin of this phrase; the Oxford English Dictionary favors the one which involves pigs to be slaughtered being hung from a beam to allow the blood to drain from the carcass, the beam in question being a trébuchet or buque in French (so presumably a Norman borrowing?)

Bears and Bulls: A bear is one who contracts to deliver a certain quantity or sum of stock in the publics funds, on a future day, and at stated price; or, in other words, sells what he has not got, like the huntsman in the fable, who sold the bear’s skin before the bear was killed. As the bear sells the stock he is not possessed of, so the bull purchases what he has not money to pay for; but in case of any alteration in the price agreed on, either party pays or receives the difference. (Wow, who knew?  It looks like the terms date from as much as a century before, tied up with the South Sea Bubble incident of ca. 1717.)

All right!: A favourite expression among thieves, to signify that all is as they wish, or proper for their purpose.

“Saint Evona, a lawyer of Britain, went to Rome to entreat the pope to give the lawyers a patron; the pope replied that he knew no saint not disposed of to some other profession. His holiness proposed, however, to saint Evona, that he should go round the church of San Giovanni di Laterano blindfold, and after saying a certain number of Ave Marias, the first saint he laid hold of should be his patron. This the good old lawyer undertook, and at the end of his Ave Marias, happened to stop at the altar of saint Michael, where he laid hold not of the saint, but unfortunately of the figure of the devil under the saint’s feet, crying out, “This is our saint, let him be our patron!”