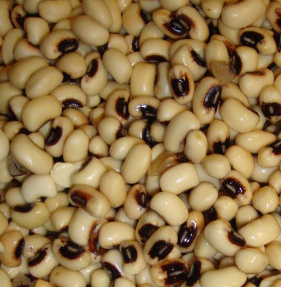 I much prefer fresh black-eyed peas to dried and reconstituted. The fresh ones are much finer and creamier in texture, and never grainy. You can also taste some faint yet distinctly flavorful and complex sugars in the fresh peas, sugars that go stale when the peas are dried.

Be aware that ham hocks are all hat and no cattle. You get maybe two tablespoons’ worth of meat for each ham hock. Anyway the tasty goodies are mostly in the hide, bone, and fat, which you will discard after their long stewing.

The peas will become a creamy porridge, with a few whole beans here and there, and some little shreds of ham hock meat waving at you.

Place in a crock pot and bring to a boil, then cook on low for three to six hours:

When the ham hocks are disintegrating, remove them carefully with a slotted spoon. Allow them to cool so you don’t burn your fingers. Sort out the meat from the bones, fat, and skin. Shred the meat and return it to the soup.

At the same time, remove the Cubano peppers and discard them.

Discard the ham hock bones, fat, and skin, unless you think you’ll like the skin minced up fine and returned to the soup. It’s pretty fatty. I put mine out in the crow feeder. Crows love ham hock leavings in the dead of winter.

Serve hot with a big dollop of sour cream on top, and a big slab of fresh hot corn bread. Nothing’s more comforting on a cold day than a spoonful of hot black-eyed peas with hock meat and a bit of fresh hot sweet corn bread dissolving in it.

You can cool and skim this soup and freeze it. It reheats well.

PrevPreviousA Month in Europe: Roof Tiles
NextCrossword Puzzlements and How Did I Get Jam on my iPad?Next