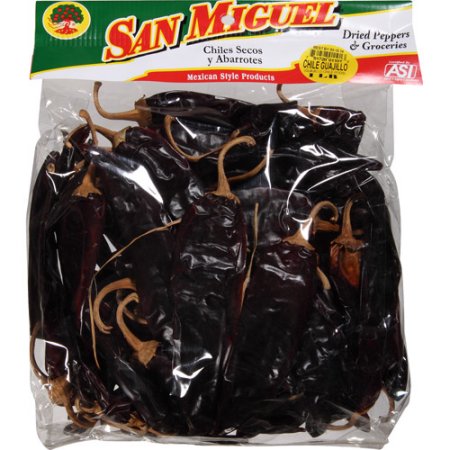 My supermercado, Rogers Park Fruit Market, is a continual inspiration to me. I was in there Wednesday getting the usual stuff and as usual browsing the yummy things I can’t have (fresh fruit, Jamaican meat patties, locally-made rum-raisin ice cream with raisins soaked in real rum in it omg, bakery treats, oh never mind) and saw that their supply of dried guajillo peppers had been replenished. Must be the new crop.

Guajillos secos come about five or six inches long, tapering, blackened in the drying process, with many seeds that are plenty hot for me thank you. If you’re a wimp like me, you will want to prep them before use:

Using scissors, snip off the stem end. Shake out the seeds. Slit the pepper up the crease and fold it open, and finish getting out the seeds. (After handling the seeds, my fingers are too spicy to let me touch my own tongue, lips, or god forbid nose or eyelids until I have washed up. Be warned.) Pull out the thicker dried strips of membrane from the inside of the pepper as well.

The pepper is now a stiff, flat sheet of rather plasticky outer skin and a seemingly imperceptibly thin layer of inner flesh. It’s now ready to use in the beef stew, below.

When dried guajillos have been stewed, the outer membrane stays stiff, almost like hard plastic, but the inner flesh softens and disintegrates, acting as a sweet, smoky, peppery thickening agent to your stew.

Caramelize the onions in bacon grease in a heavy skillet. Place in a slow cooker with half the stock. Deglaze the skillet with a slosh of stock, scraping up all the burnt crunchy bits, and add that to the slow cooker.

Rinse and dry the beef, slice it into bites, then salt and pepper it. Add more bacon grease to the pan and heat to sizzling. Sear the beef quickly in the hot bacon grease to seal in the juices. Add to the slow cooker.

Deglaze the skillet with a slosh of stock, add the mushrooms, sweet potatoes, and garlic, slosh in some red wine, and cook, stirring, until the mushrooms have absorbed the liquid. Add all that to the slow cooker.

Trim, de-seed, de-membrane, and flatten the guajillos per above and add them WHOLE to the slow cooker, along with the pineapple. Add the rest of the stock. Give the stew a stir to mix it up.

Cook on high heat in the slow cooker until simmering (bubbling), then reduce to low and cook for about 2 hours.

Once the guajillos have softened (about 2 hours in), remove all the guajillos, which are now much softer. Scrape the soft mushy insides out and stir them back into the stew. Discard the hard outer shell. You can do this step as soon as the inside of the guajillo peppers has softened. If you leave it to the end, the shells may come out in shreds, which are a pain to pick out of the stew at that point.

Continue to cook the stew on low for another 1 to 2 hours.

Extra-tasty with ice cold beer, a big dollop of sour cream on top, and maybe a crusty bolito roll to dip into it.