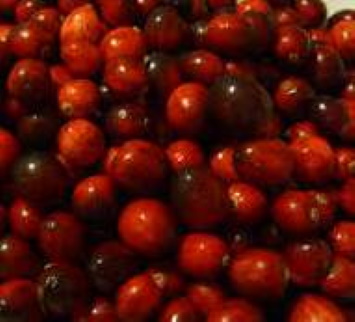 As the weather marches into colder country, we think of baking. Now that I’m on this darned low-carb diet, I think of it all the time. Some days my thoughts yearn toward pies and cookies. Other days, a simple Pop-Tart would be enough to meet my craving. Not that I surrender to craving. But if I did, it would be to these moist, fruity, cinnamon-packed muffins with their sparky bites of cranberry surprise.

This can also be a coffeecake. The extra flour, and the cranberries, allspice, butter, and brown sugar are my idea, adapted from a recipe by Genevieve Marion of South Holland (Michigan, I think) which appeared in the Chicago Tribune on Wednesday April 18, 2001.

Peel and slice the apples. Place the apples, cranberries, and walnuts in a separate bowl.

Sift together the flour, cinnamon, allspice, and baking soda. Now add the apple-walnut mix. Toss it all to coat.

Add the egg mixture to the flour mixture and fold all together with a few gentle strokes until just moistened.

Fill paper-cup-lined muffin pans about 3/4 full, or tump all the batter into a greased 9×11-inch pan. Bake at 350oF until browned and springy to the touch, about 25 minutes.

For a more surprising muffin, use dried cranberries soaked for a few days in cherry brandy!

PrevPreviousThe January read…
NextI Wrote a Letter to My LoveNext