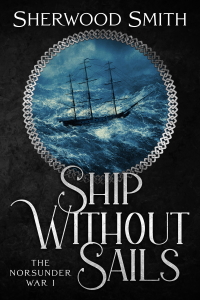 Ship Without Sails
by Sherwood Smith

Nobody sane wants war, but what happens when war comes to you?

In this first volume of The Norsunder War, the allies we met in The Rise of the Alliance series are faced with the news that their border has been invaded. For Atan, Queen of Sartor, preserving lives and knowledge come before fleeing to safety. Jilo of Chwahirsland risks his life to resist the return of an evil king. And for Senrid of Marloven Hess, it means fighting for every bloody inch against a combined army whose might hasn’t been seen for eight hundred years.

Do they endure? Resist? How do they fight back?

While on the run, they may discover that even when life is most dire, there is still hope . . .

A novel of Sartorias-Deles, and Book I of  The Norsunder War

Choreid Dhelerei, capital of Marloven Hess, appeared to be unchanged, the embodiment not just of power, but of order. Stability.

Two newly arrived figures stared as they recovered from the transfer.

Liere Fer Eider’s gaze moved over the sun-warmed, peachy stone walls of the fortified city as she breathed in the combined smells of sage and plains grass and faint, oh so faint, the distant sea, until her daughter Lyren-Sartora twitched impatiently by her side.

“Why did you do the magic transfer to the outer Destination?” Lyren-Sartora asked. “You couldn’t have forgotten the inside one! It’s only been a couple of years since you were here last—”

Liere had not forgotten. She was one of the half-dozen people who Senrid had trusted enough to transfer straight inside his fortress.

“Now we have to walk all the way!” Lyren-Sartora hissed a loud sigh.

“It’s a perfect afternoon for a walk,” Liere replied. “And I wanted to see if anything’s changed.”

“Does anything ever change in Marloven Hess?” Lyren-Sartora snarked; at thirteen she was already an expert at the teenage eye roll.

“No,” Liere said, but maybe its king had. She looked up at the massive city gates and wondered if any enemy (other than Marlovens themselves) had ever tried to breach them.

The sight, the scents, overwhelmed her with how much she’d missed this place. No, how much she’d missed Senrid, the only person she’d been able to tell everything as soon as she thought it. And yet here she was, mentally rehearsing what she ought to say, and what would be best left unsaid.

Lyren-Sartora was also intent on personal concerns, though of a very different sort. She was annoyed with Liere, who had never seemed like a mother, but more like a devoted, darling, exasperating, very, very different older sister. Lyren-Sartora did try to hide her exasperation. Liere had vanished for nearly five years. When Lyren-Sartora finally got her back again, instead of being like a sister, Liere had acted like a typical grownup and became besotted with that yellow-haired Elsarion king in Enaeran. So now, even though Lyren-Sartora had Liere back again, it was only for a month, before she’d go off to bury herself in backward Enaeran to live with him.

Someone should do something. Maybe Senrid would know what to do, what to say, how to bring back the old Liere.

They passed inside the gates and headed toward royal castle that, like the city, was an artifact of Marloven history. But now these same buildings, even the afternoon slant of sunlight, all seemed to have Senrid’s personal mark in some way Liere could not quite explain. Widely as she had traveled, Choreid Dhelerei had never seemed just another city. It was Senrid’s city.

Shafts of afternoon sunlight warmed the western facades of the heavy stone buildings Senrid had fought so hard to hold. Some of those massive relics of the bad old days revealed small alterations after all; here and there windows and handsome carving broke up the martial expanses. Windows high up, of course. After all, the inhabitants were still Marlovens, and one did not overcome a millennium of militant acculturation in a few years.

Had their leader entirely overcome his?

Along the street, banners folded or shutters pulled to as shopkeepers closed for the day. Laden horses and empty carts wound their slow way back toward the city gates. The air carried—besides dust and the ubiquitous smell of horse—the familiar aromas of herb-laced rice, cabbage, chicken or fish cooking in various shops and inns along the way. Rye bread baking. All so familiar.

Liere tipped her head up, breathing in the blend of summer sage and wild onion and garlic and mustard that sent her back to herself as a child, sitting cross-legged opposite Senrid in his rooms up in that castle, eating from dishes they set on the floor so they could look at maps or books all spread about them, and argue about history, and how they would change the world. How curious that a mere memory, and a happy one at that time, would cause her eyes to sting. It had to be this unsettling sense that she’d lost something precious, or that she’d arrived a little too late.

A strange sensation. She’d lost nothing. And she was about to mend that misunderstanding that she had caused, however unconsciously.

As they reached the top of the street on which the royal castle was built, Liere spied something new: a theatre. Music, plays—how Senrid’s vile uncle would have hated it all!

Between the steep roofs of two tall townhouses rose a sentry tower. Half a street more, and there were the black and gold screaming eagle banners snapping in the high breeze. They reached the castle walls—as high as the city walls, if not higher—just as the shadows began to meld and the sand-colored stone took on mellow, muted sunset tones.

The main gate stood wide, and a sentry on top scanned them for weapons. Inside the main courtyard, little traffic impeded Liere’s view of the broad flagged expanse.

“I’ll meet you inside,” Lyren-Sartora declared, and took off, ducking through a doorway into the residence portion of the royal castle, leaving Liere alone.

A runner clad in gray approached, and courteously inquired her name and her business. She watched him assess her: young, slender, long wheat-colored hair like so many from this area of the world; plainly dressed in a dusty summer robe over riding clothes much like anything found along the entire continent; a single jewel—set in a ring—on one thumb. She waited calmly for his gaze to travel back up from her sandals to her eyes, and his expression altered to speculation.

“Is the king here?” she asked, sidestepping his questions.

“Are you expected?” he countered.

“Ah. He’s here, then. No, I am not expected. I’m a personal friend, back from a long journey.”

“Oh.” That was as involuntary as the widening of his eyes. This time he visibly restrained himself from giving her another toe-to-topknot once-over. Instead he hailed a castle runner and passed her along, with a formal “Take this person to the king, please,” followed by a surreptitious violent gesture and a breathed Sartora just behind her shoulder that Liere’s pleasant expression gave no hint she’d overheard.

Sartora. It seemed she would never be rid of it. But she supposed they would no longer call her the Little Girl.