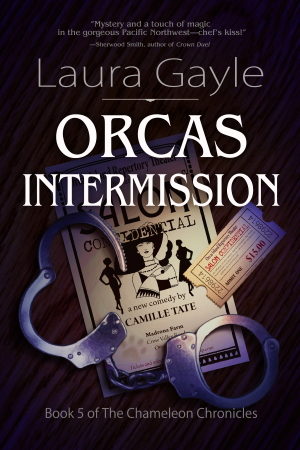 Camille Tate is ready to be seen … but is her world ready to see her?

Reeling from her recruitment as a confidential informant in the island’s ongoing more-than-murder investigation, Cam is flummoxed by an escalating avalanche of secrets divulged by everyone from her boss, Lisa Cannon, to her friend Paige Berry, and the rakishly charming JoJo Brixton, among others. No one and nothing is what it seemed; and as each new revelation leads to even deeper ones, it becomes a struggle to focus on her fabulous new day job: bringing her recently completed play, Salon Confidential, to the stage! In all the chaos, Cam nearly misses the one thing that’s so clear to everyone around her: how much she herself is changing.

In this fast-moving, humorous, heartbreaking and heartwarming final volume of The Chameleon Chronicles, Cam faces more than one old nemesis, a slew of surprising new challenges, the long arm of the law, and her innermost fears…as a truly unforgettable opening night draws ever nearer.

“I told you I had reasons,” he said soberly. “Very compelling ones.”

JoJo Brixton’s grave expression melted into an impish grin as he gazed up at me from his seat at a conference room table deep in the bowels of Friday Harbor’s courthouse.

I sank into the chair across from his before my legs failed me, the implications cascading through my mind. “How long?” I finally managed.

He cocked his head. “You mean, how long have I been helping the nice Feds?”

“Hmm.” He pretended to think. As if. “Remember that day at our house?”

Our house? I’d never lived with JoJo—and then I understood. “Your parents’ house? When they searched it, last December; and you made me lunch, pretending not to know why pâté is expensive?”

JoJo shrugged. “I still maintain that every animal has a liver. But yes. Veierra and McMichaels had just had words with me, right before you arrived. Perhaps I seemed uneasy?”

“Oh yeah.” He’d been so testy that we’d almost had a fight. Lisa Cannon’s acting troupe had just trashed the house before haring off to party elsewhere, and I’d been worried about losing my job as the Brixtons’ caretaker. “You did seem…not quite your usual careless self. But why’d they search it if they were there recruiting you?”

“Misdirection, my dear.” He leaned back in his chair. “They didn’t want you guessing the reason for their visit. I really can’t overstate how relieved I am that I can be honest with you at last.”

Did he sound almost serious? I didn’t know which of his stories to believe anymore. I rubbed my eyes, having been whisked out of my house and carted over here to San Juan Island before I’d even had coffee. “Okay, but…why are you working with them?” JoJo Brixton just didn’t seem like the ‘FBI mole’ type.

Wariness flickered across his face, as if he were weighing his next words.

“You did just say you’re going to be honest with me now,” I added.

“I did, didn’t I?” He grimaced. “Well then…can we just settle for an admission that the Feds might have discovered a thing or two about me which I’d rather not see them pursue?”

“They have something on you?” I leaned forward. “What is it?” When I’d first walked through the Brixton house as caretaker last November, JoJo’s room had smelled faintly of pot. But that was legal in the state of Washington now. Alcohol was the only substance I’d ever seen JoJo use to excess, but…had he been involved with some worse drug?

“Cam, my dear,” he said, shaking his head, “it can’t come as a surprise to you that I’m not exactly a stickler for the rules.”

“Well, no. But which rules are we talking about, exactly?”

“Any rules.” He gave me a bright smile. “So, what shall we talk about now?” He cast a quick glance toward the security camera above the door, then looked back at me.

Oh. Of course. Gosh, I really needed that coffee. “Okay,” I said. “So, then…you’ve been spying on…who, exactly? Wait! Was it me?” I suppose this should have occurred to me sooner, but, see above re: coffee. Remembering everything that had happened the last few days got me creeped out all over again. “Oh, JoJo, do they know about Marie’s boxes from my trunk?” I shot a glance back up at the security camera, horrified. If they hadn’t, they did now. My arms even started tingling. Who knew what I might blurt out next if I didn’t get some caffeine soon?

“Relax, Camikins.” He put a hand on my arm briefly. As if he somehow knew about my chameleoning. (Did he?) “Of course they know about the boxes. I brought them straight over here for analysis—do you have any idea what an important piece of evidence they are?”

I nodded, dumbfounded. “Yes, I do, which was why you were going to destroy them!”

He shook his head again, still smiling. “Which I might actually have done if those boxes were evidence of some wrongdoing on your part; but they aren’t, and everyone knows that. You’re not in any trouble, dearest. Didn’t Veierra and McMichaels tell you that? Everyone—even Sheriff Clarke—knows you’re not the bad guy here.”

“Well, yeah,” I allowed. “I just…I guess I’m having a hard time believing it. Believing any of this whole situation, to be perfectly honest.”

“I understand,” he said gently. “You’ll have a lot of things to rethink now.”

Who knew JoJo could be so sympathetic? I’d always liked him, of course (even when I hated him). But I’d met a different side of him just a few days ago, when he’d whisked me off to Seattle in a freakin’ helicopter and spent the day being the fairy godmother to my Cinderella; and now…here was yet another new side of him. My brain was struggling to keep up. “Okay, so you’ve been spying on me, but everybody knows I’m not the bad guy, so—who else? Lisa?”

His expression softened even more. “You know how much I love Lisa. I have only ever wanted to protect her.” His glance darted to the camera once more, then back to me. “Lisa Cannon is as innocent as—well, no, no one’s as innocent as you are, little lamb. But she’s close, and my only concern here is to help catch the real bad guys and clear Lisa’s name.” He blinked his ridiculous, lovely lashes at me.

Somehow, the more absurd his claims became, the more I believed him, and yet… “Clear her name, and save your own skin, of course,” I reminded him.

His smile widened as he gave an insouciant shrug. “Well, naturally there’s something in it for me too, my dear. That’s a given in anything I do, isn’t it?”

Oddly, I found this admission just as hard to swallow as any of his others. Whatever the FBI had on him must be pretty dire if it had made him willing to answer to them. The JoJo Brixton I knew didn’t answer to anyone, slippery charming eel that he was. “So who’s the real bad guy?” I asked. “Lisa’s ex-husband?”

“Oh honey, there are so many of them.” He shook his head; his perfect hair reflected even the fluorescent lights gorgeously. “This whole mess is so much bigger—and darker—than you can imagine. Derek is just one small worm in a much, much bigger can of them.” He leaned forward and held my gaze, looking very nearly earnest. “That is why I tried so very nobly to get you off this island and out of harm’s way.” He frowned, theatrically, before smiling once more. “Though, selfishly, I’m glad my efforts failed—especially now that we can share my secrets. You’re such sincere and entertaining company.”

“Well thanks.” I wasn’t about to say the same thing to him…not just yet, anyway.

He sobered again—emotions flitted across his face like an unsettled weather system. “Even Lisa has no real idea how much danger she’s actually in.” He patted my arm once more. “Another reason I’m happy to have you working with me now. Two can watch her back more effectively than one.”

Dang him, he was softening me, no matter what my rational mind might warn me to remember. I gave him an uncertain smile. “Do I have any idea who you really are?”

He paused, studying me. “You’re thinking of all those things I told you about myself over lunch in Seattle, aren’t you.”

“Well, yes; that, and all the other stuff you’ve told me—like pretending to be drunk so you could apologize to me, because I’m your only real friend. I mean, JoJo, really?”

“Yes, really. I meant everything I said that day, and I mean what I’m saying now: you know me better than nearly anyone, actually.” He laughed sadly. “I mean, you’ve met my family.”

“I have indeed.” I shook my head. His sister was as callous and cutting as JoJo, but without the charm; his father was inattentive and ineffectual; his mother—my old boss Diana—was…I shivered. The less I thought about brittle, demanding, exacting Diana Brixton, the better. “But why do you pretend to be such a—I don’t know—such a jerk?” I burst out.

He spread his hands. “Because I’m a jerk!”

He sighed. “Okay, protective camouflage then.”

“To hide you from what? From people caring about you? Actually getting to know you?”

His eyes crinkled with his smile. “And see, this is exactly why everyone loves you, Camikins. I know you’re holding as many secrets as the rest of us, if not more—but nothing ever even dims your sweetness! It’s, it’s, I don’t even have words for what that means to me—to everyone who meets you.”

Not everyone, I thought darkly, recalling Kevin, and Colin…and Kip too now, probably.

“From the moment I learned to talk,” he went on, “I could see that sincerity just made me vulnerable, even deep within the bosom of my ever-loving family. Exposing any feelings, any desires, any honesty, was simply setting myself up for betrayal, damage, hurt—and not even for any reason with a name, but just because that’s how my family is. I learned very early to hide behind a JoJo face that charmed everyone and let no one in. And,” he added, leaning forward and dropping his voice, “I believe that you, dear Cam, are the first person I have ever said that out loud to.” Before I could find any response, he brightened up dramatically. “And now that you are on the team,” he gushed, practically sparkling, “I don’t have to keep deceiving you—about anything!” He put on a sad-clown face. “You can’t imagine how hard it’s been to keep this all to myself.”

I was getting whiplash. Was this performance yet another mask? For all I knew, he’d been performing for so long that even he didn’t know.

I really, really needed some coffee.