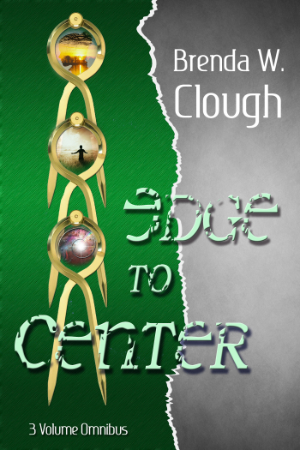 What is time travel good for? How many worlds and friends can Jack Wragsland save, or lose, with the Edge to Center tech?

An omnibus edition of the entire Edge to Center series, containing:
The River Twice
Meet Myself There
The Fog of Time

Calla Ang’s destiny is to be president of Jalanesia, like her grandparents before her. The arrival of Jack Wragsland, a Victorian time traveler, upsets this plan forever. At least, in this time line. Together Jack and Calla plumb the nature of time and reality, and find out who he really is.

“Of course I tell the truth. I’m a clergyman, in the Church of England.” Wragsland was still chortling with glee. “Ah, I know what! If this is the capital, lass, then take me to your leader. What is your name, child? I can’t go on addressing you as lassie.”

“My name is Calla, Calla Ang,” Calla said repressively. She did not much care for being called ‘child.’ And this must be the first person she had ever met who didn’t know who she was. Well, it would be good practice for Yale or Princeton — college would be full of people who would not know her or her country. “My grandmother is Madame President of Jalanesia.”

“Excellent. Let us go to her.”

In the face of this naïve and giddy optimism Calla could only smile. Grandma sees nobody, she wanted to say — you want Uncle Bingo. But Grandma had been so gloomy this year, really down in the dumps. Would it do her good, to have to decide something? They could always fall back on Uncle Bingo, or Mr. Lia’s plan to toss Wragsland into a high-security cell. When Calla thought of her uncle’s green-clad elite bodyguard corps she did not think that a daffy time traveler would go down well with them. “Sure,” she said impulsively. “Get in the car — let’s go.”

Although he pretended to only speak Jalanese, Calla always suspected Mr. Lia understood more. And here was proof, when he immediately burst out, “Impossible, Miss Calla. In a closed car — with you? Far too dangerous.”

“You can hold onto his papers and stuff,” Calla said. “Does he look like Bruce Lee? And, I know — he can sit in back between you and Nanna. I’ll sit in front with Chocky, with the partition closed.”

“And locked,” Mr. Lia negotiated reluctantly. “And the house guards will meet us in the driveway at Orchid House.”

Calla waved an approving hand. “Mister — Father — what is your proper title, sir?”

“Reverend,” the stranger said. “Charmed to meet you, miss. Are you in school?””

“I am in eleventh grade at St. Thomas Aquinas Catholic School,” Calla said. “If you will sit here beside my maid, we can be on our way.”

At her nod the cops let Wragsland go. He straightened his collar, pulled his shirt cuffs down inside the black pipestem coat sleeves, and awkwardly clambered into the back of the limo. Mr. Lia broke off his volley of commands to the cops and reached in to snap the Plexiglas barrier shut and lock it. “Tell him, Miss Calla, that the slightest error on his part will be fatal.”

Calla nodded her understanding and admiration — Mr. Lia wanted Wragsland to think that nobody else here understood English. She repeated Mr. Lia’s words to the stranger, adding, “Please sit still until we arrive. I will be sitting in front.”