Anastasia Devlin is a genius at organizing her eccentric family and her online clients, but she seriously doesn’t have time for playing detective.

Then her super-geeky teenage brother Tudor claims his hacker worm has escaped and is mysteriously chewing through the Internet. This, followed by the news that the executives of a major computer company have croaked from exotic fish poison sets Ana’s danger radar pinging. Soon Tudor is running from government agents, a trained assassin, and corporate spies.

Tudor’s worm might have led to murder, but Ana’s landlord—the infuriatingly competent Amadeus Graham—could take the fall. Before long, Ana has four bodies, dozens of suspects, and more trouble than she can count. On top of which, the Internet is on the brink of collapse.

Finally Ana gets more than a glimpse of sexy Graham, the enigmatic tycoon who holds their inheritance hostage. But this time, she holds the trump card and is about to secure her family’s future—if she lives long enough.

Evil Genius (first book of series) review:
“This thought-provoking story includes a convoluted mystery and some fascinating characters. The interactions between Ana and the mysterious Amadeus are delightful. The ending will leave readers longing for more stories about this captivating heroine and her gifted half-siblings.”
-Susan Mobley, RT Book Reviews: 4 stars

With several million books in print and New York Times and USA Today’s bestseller lists under her belt, former CPA Patricia Rice is one of romance’s hottest authors.

Patricia Rice’s emotionally-charged contemporary and historical romances have won numerous awards, including the RT Book Reviews Reviewers Choice and Career Achievement Awards. Her books have also been honored as Romance Writers of America RITA finalists in the historical, regency and contemporary categories.

“The world is full of evil, and tablet computers are the right hand of the devil,” I warned, tugging EG—Elizabeth Georgiana, although Evil Genius works too—away from her admiration of a businessman’s expensive new device. “That one is worse than cell phones. It tracks your every move. You might as well have a drone hovering over your head 24/7 and hand out tickets to your bank account.”

I checked the airport’s overhead signs for international arrivals and picked up speed.

“Why is it bad if some stupid computer company tracks my every move? They really want to know I’m in my bedroom? And I don’t have a bank account.” Fascinated by new tech, EG dragged her feet and strained to see what the guy was doing. “If we had a system like that, you could use it to find me.”

I continued marching past Dulles baggage claim belts, forcing her to run to keep up. “You want me to hack MacroWare to find out where you are?” I asked, performing my best incredulous act. “You think I have nothing better to do?”

With no apparent doubt that I could perform miracles, EG shrugged. “You’d have more fun doing that than sending Mallard to look for me. Intercoms are so last century.”

“My baby sister, the techno-fashionista.” I knuckled EG’s shiny black hair and changed the subject. “Are you going to tell me what inspired Tudor’s visit? Last I heard, he was neck deep in some hacker competition and couldn’t even meet Magda for dinner when she was in London.”

Magda being the so-called Hungarian princess who had birthed me and my roving half-siblings—incredibly long story. As an example, I’m Anastasia Devlin, my next sibling is Nicholas Maximillian. The first names continue in royal arrogance while the last names change with regularity. Our mother’s non-maternal instincts would be the reason Tudor was heading this direction and not toward her.

I wanted to resent that Tudor had sent his itinerary to a nine-year-old and not to me, but unfortunately, I understood. I’d spent years raising my younger half-siblings, then years hiding from them.

Sixteen-year-old boys were easily confused. My little brother hadn’t known if I’d tell him to jump off a cliff or go home where he belonged—not that he actually had a home other than his boarding school.

Despite his apparent confusion over my frame of mind, Tudor had bought the tickets and sent EG the info, knowing she couldn’t do anything to stop him. This rated pretty high on my Here-Comes-Trouble meter.

EG shrugged again. “It was the middle of the night when he emailed me, and I doubt he had your phone number.”

Which made me even less comfortable—Tudor was our family communication central. If he wanted to find my number, he’d find it. After all, he’d been the one to locate my hiding place in Atlanta so EG could visit me earlier this year. Best scenario—he just didn’t want to talk to me.

I feared otherwise. As a family, we had essentially been raised to flee in the middle of the night at a moment’s notice. I feared teenage rebellion was too easy an excuse for Tudor’s arrival, and buying last minute plane tickets was a dead give-away. Tudor was on the run.

My phone pinged a text warning. Popping it from the case on my belt, I scanned Nick’s message and frowned. “Nick says watch CNN. Think Patra is on the news?”

Our twenty-something half-sister had only recently moved to Atlanta to take a job with the news station. She was a pretty—emphasis on pretty—junior reporter. A live shot seemed unlikely, unless she was in trouble—far more probable given our history.

“We’ve got time,” EG said eagerly, turning around to find a newsstand with a television.

I’m not tall and willowy like Patra, but I’m well-muscled. I can move fast. I passed EG, and she had to run to catch up. To see what had set off usually blasé Nick, I pushed my way through the crowd that had formed around a TV monitor.

“In breaking news, Stephen Stiles and four of MacroWare’s top executives have been hospitalized for possible food poisoning after Wednesday’s conference dinner at a D.C. hotel. MacroWare stock prices are plummeting over worries that their new product release will be delayed.”

I frowned in puzzlement. Patra wasn’t making the announcement. Now that we had a nest egg to invest, I’d socked it away in mutual funds, not something as risky as MacroWare stock. I saw no relevance to our lives in a bunch of over-fed execs pigging out and getting sick. I’d had enough food poisoning experience in my childhood to know the routine. They’d spend the day on the Royal Flush and someone on the catering staff would get fired.

I was about to turn away when I caught the file clip of VIP attendees at the conference. I froze and gawked. Sauntering into the hotel wearing a sleek Italian business suit, with his hand in one pocket and looking bored was our landlord, Amadeus Graham, hermit extraordinaire.

What on earth? He couldn’t condescend to leave his lair to have dinner with us, but he could go to a public dinner with Stephen Stiles and a thousand computer geeks? This was not normal by any standard I’d learned these last months of living under Graham’s roof.

Amadeus Graham had been an ascending political god until his life had gone up in flames with the Pentagon in 9/11. His wife had died in the tragedy, and he’d emerged from the fire badly scarred in more ways than one. He’d deliberately incinerated his political career with his crusade against powerful figures influencing the president—a crusade he carried on to this day. Only these days he did it in private. He’d painstakingly eradicated his existence, leaving the world to think him dead.

Appearing in public was very much not Graham’s style.

The clip was only a brief glimpse. I couldn’t be positive that was our reclusive spy in the attic striding into the hotel as if he owned it.

Who was I kidding? We’d sucked each other’s faces not that long ago. He was the irritant under my skin, the hindrance to my every desire—except lust—and just watching him cross a TV screen escalated my pulse rate.

Graham was so bloody reclusive that I was pretty certain Nick had never seen him. In his position at the Brit embassy, our budding diplomat brother must have heard more pertinent news than I was seeing. I texted him a YEAH, AND?

What had been so important that Graham had come out of hiding to attend a geek business conference—one in which five extremely important, powerful men had turned up sick? Men who could affect stock markets!

My gut roiled as if I’d been the one poisoned. No good came of surprises like this. Or maybe it was just worry over Tudor that had my paranoia alarm turned on. 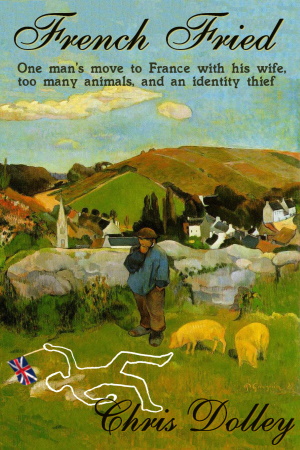