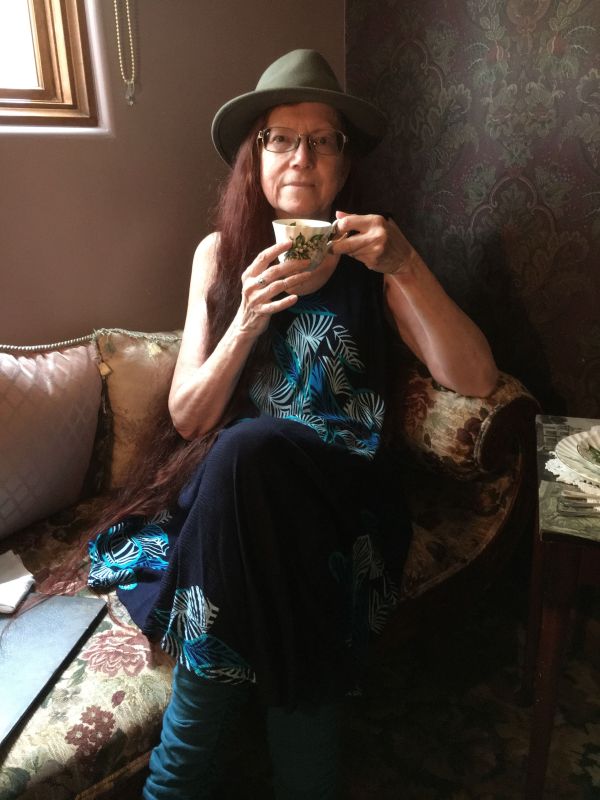 Sherwood Smith has been writing fiction all her life, but her first publication was in 1986. She’s written books for the young adult audience as well as for general audiences, her most popular young adult title being Crown Duel, and its prequel, Stranger to Command, both published through Book View Café, and her best-known adult title the Inda series, published by DAW Books. Readers who want a more complete bibliography can find it on her website here.

Q.) How much of the setting for Crown Duel and A Stranger to Command is your imagination, and how much is from history, period non-fiction and even experience?

A.) Crown Duel’s first half wrote itself when I was just twenty, living in Austria as a student abroad. Due to a serious financial setback in my family, a month after I arrived I was told I had to make it through the entire year on the thousand dollars my dad had initially sent me to get me through four months, or come home. I counted up my expenses, including rent and university fees, and discovered that if I ate once a day, and lived in a rented room with no heat and no hot water, I would just make it.

The problem was, I was from Southern California, and this was my first actual winter. I got sick with walking pneumonia, and stayed that way until spring. Culture shock didn’t help—I discovered how profoundly ignorant I was, maneuvering alone in the tail-end of postwar Europe: the heroine of Crown Duel is profoundly ignorant and pig-stubborn, toiling cross country with half an army after her… well, you asked how much reality lay behind its inspiration! I’d say equal parts my immediate experiences, part my immersion in European history, and the rest was imagination.

Q.) What books did you read to create Colend, Remalna, and the other “civilized” societies on their side of the continent?

A.) Memoirs and letters are absolutely unbeatable. There are some wonderful personalities to be met through letters and diaries—Madame Junot, whose husband was one of Napoleon’s marshals. The Wynne sisters, who were teens when the French revolution broke out—their limited but fascinating view is great. Liselotte von der Pfalz, married to the brother of Louis XIV the Sun King. I laugh out loud when I read her letters. Lord Chesterfield’s letters to his son are a priceless look at the enlightenment world, and so are the letters and journals of Mary Wortley Montague. Madame Sevigny’s letters are so good that Horace Walpole used to rave about them—and his letters are a real treasure, as are those of George Selwyn. I could go on—these people lead to one another, and every one of them shed light on what happened, what people wore, ate, thought. How they played. What their jokes were. How they treated their servants and their kings.

Q.) A Stranger to Command is so very different in mood from Crown Duel, which is more of a fantasy romance, the first half with adventure, the second half a novel of manners. But the prequel has very little romance—it’s more like a military school story, with an emphasis in learning how to become a king. What is it about the question of command, of ruling, that so interests you? This is not the first novel you’ve written that considers this issue.

A.) It’s not so much command as the question of power—and its cost. Just how much it warps those who have it, though humans are hardwired to form into hierarchies. I was a kid during the repressive fifties, and kids were definitely not safe from pain. Looking back, I’d say that underlying all the adventures are two questions I’ve been trying to answer all my life: what makes a family, and what is the cost of power in human terms.

Q.) These themes also show up in your books for adult readers, with a lot more complexity. Does this include your newest books?

A.) Yes—to summarize drastically, these are among the many themes in the Rise of the Alliance series, concluding this month with the publication of Nightside of the Sun. That series, involving characters whose stories I’ve been writing all my life, are heavily imbued with my decades of reading Western history and literature.

But also concluding, in March, is The Phoenix Feather martial arts xuanhuan series, which was my pandemic sanity project. It was another, like Crown Duel, that began writing itself, drawing on my past six years’ immersion in Asian fantasy, mostly Chinese, but with elements of Korean and Southeastern tropes. “Xuanhuan” acknowledges myths and tropes from world history and literature, with the greater portion being an Asian feel. Barry Hughart’s Bridge of Birds is what I think of as xuanhuan.

Q.) In A Stranger To Command, actual training in drama, and the ability to continuously wear a different persona, is all that is keeping the Duke of Savona alive. Where did your love of theater come from? Do you have training in it?

A.) Yes—I “invented” RPGs as a kid, before anyone had heard of them. I had a group of friends on my block with whom I made up these long stories, and we lived out the parts, wearing castoff cocktail dresses with the long floofy skirts. Our castles and terrain were the back yards, and roofs of our blue-collar neighborhood directly under the flightpath of jets taking off and landing at LAX, before the airport booted everyone out and gutted the area. When I look back on my nine-and ten-year-old self running full out on a six foot high stone fence, my heart squeezes. But we did, playing those story-games that I invented!

I volunteered for every theater thing at school, danced in many productions, and first began directing when I was a summer camp counselor. During my teaching years, drama was one of my subjects—I’ve lost count of the plays I’ve produced, choreographed, did the set painting for, directed, and usually either wrote or adapted.

Q.) What is coming next from Book View Café?

A.) I’m glad you asked! In May, The Wicked Skill, in which some of my longtime characters find romance—set against a background of revolution, one conducted through manners, the other by swashbuckling youths who think life is a game…