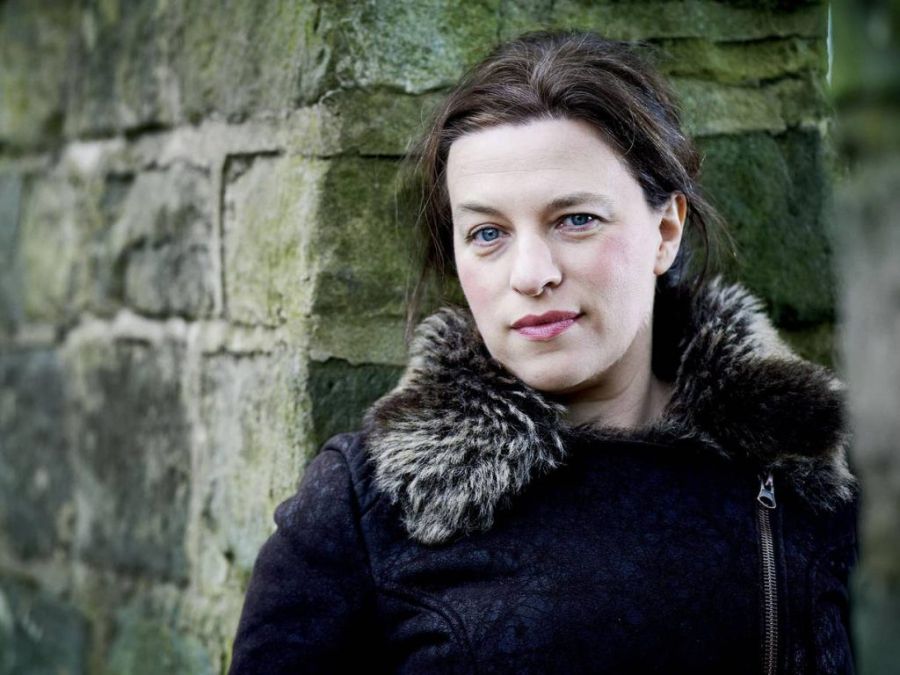 “Real life often disappoints. So, it must happen in a story.”

Writer Justina Robson has been writing SF and F for a long time. Like many creative people she spent a good decade working at writing before her first sale. Since then she’s had fourteen novels published, mostly in the UK and Europe, and appeared in many anthologies as well.

“I struggle to make sense of the world through stories,” she said when she introduced herself to the writers at Book View Café. “But also to write escape routes from the worst of human stupidities. Real life often disappoints. So, it must happen in a story.”

Book View Café is delighted to present a special ebook edition of the SF novel THE SWITCH, available only in the US. And a special interview to introduce you all to Justina Robson!

THE SWITCH is a novel which was intended to be a short story, written as a gift to a friend who was living in an oppressive situation and wanted some lift of the spirits. Their Brief: write something about a gay oppressed guy in a terrible dystopia, who has a romance, and escapes. My friend gave me his RPG character as the ‘escapee’. I said I couldn’t write about them directly, as that felt too weird, and like both stealing and overwriting someone’s personal vision. I don’t believe in psychic things, but it would definitely be some kind of psychic step too far for me. But OK. Sure. Minor part. We agreed on that.

So, then I looked for a character of my own to tell this story, to white knight the RPG guy, to fix the shit, to win, while being under the jackboot from the get-go. Someone who would explain to me how you get to a shitty future from here. (I know, I know, LOL right? But this was years ago when I still had a whiff of naiveté left). And that’s when Nico Perseid appeared, dressed in a terrible Hawaiian shirt, shorts, flip-flops and Ray Bans, with a too-dark tan and California blonde hair. And guns. And an attitude. He HATED, with a pure, incandescent, specific, weary, dogged, hopeless-yet-optimistic kind of hate.

Reader, I loved him.

I think it probably started with Star Wars, as the point where I adopted machines as automatic features of my imaginary worlds. The AI interest as a scientific effort–that element appeared when I was at University and studying philosophical, psychological and linguistic theories of how human beings operate. I toyed with the idea of doing a Masters in AI, but I chose to start writing instead. Kind of wish I had studied it further now. At the time I had convinced myself I couldn’t do both.

I do think it could work at fictional levels, but there are two massive issues currently in the way of that; human corruption (by which I mean human renditions of reality are riddled with beliefs that are self-serving, for good or ill, and untrue, and it would be better if these weren’t carried into AI as they will only cause the same difficulties there as presently here) and the ‘problem’ of General AI.

I used to think it was probably beyond the kinds of scenarios that I had been thinking about in the 1990s, where I tried to write about the origins of general AI in books like Silver Screen, but I’ve changed my mind recently thanks to seeing the output of DALL-E 2, an art-mashing engine which has taught itself. I do think that the factors driving human cognition—survival, given our set of unique circumstances as the particular animal we are–will have had the most major impact on us, and that whatever it is that drives the development of AI (at the moment, human prompting) will have an effect on that, which would be massively different if it were to evolve itself independently. Ultimately it is not controllable, as humans are not. It would be a great shame if it were to fall prey to the same madnesses that we inflict on ourselves.

I would say it has changed over time, but it’s mine, and it has varied by project, but even when I’ve tried to write highly distinct characters I’m doing it in my idiom, in the way of thinking that I have, so there is no ‘perfect’ deep fakery to my ventriloquism there! I write very immersively, so it’s the limit of my acting ability you see there. I’ve been working more recently on trying to distance myself but very mixed successes as I start losing interest as the distance increases.

Do you read for pleasure? Fiction or nonfiction? Do you have favorite writers, genres? What are you currently reading?

I read both, but much less than I used to when I was only a reader and not a writer. I am presently reading Catriona Ward, a horror writer I really love. She’s got such a powerful vision and can write such intricate, real-feeling people even when they’re far from ‘ordinary’. I like reading nonfiction if it’s about yoga, psychology etc and I particularly like keeping up with physics and so forth through various articles. But I’m a dabbler, I don’t have the maths skill or the ability to work with some kinds of very abstract thought that I’d need in order to be proficient. I rely on science journalists. I read philosophy and political thought for fun although all the politics is teetering on the edge of the bin right now for me. We live in exhausting times.

A: There are more stories featuring Nico coming out in the new anthologies, The Reinvented Heart (https://amzn.to/3OWbiTw) and Night, Rain and Neon (www.newconpress.co.uk). There’s a kind of continuity and development to these which suggests putting them together into a longer book. Or I may write more novellas about the found family on their giant war platform in space. Surely, they will find no more terrible problems and terrible people up there in the bright and shiny transhuman future! What could possibly go wrong there?😊

I like creating worlds and situations that are fun to explore. I dislike the fact that it’s always just me in there doing it so ultimately I keep meeting myself coming back–that used to be much more interesting than it is. I feel that I am trying to push my personal limits all the time, like expanding a bubble, and that’s good. When I can’t do that (much more often now) I feel sad and tired. I search for stories and thought by others to help me forwards (whether that is inward or outward, though lately I think there’s only inward). I like the feeling of discovering, even though I’m only discovering things for me, that is they’re only new to me not to humans in general. I dislike it when I feel the pull of familiar tropes and wonder if they’re real because they’re liked, or real because they’re common, or just traps you fall into through habit. I still like them. I just feel a moral worry about them.

Do you use different styles for short versus long fiction? Is this deliberate?

I use different fabrication techniques, I would say, rather than styles. Short stories have to get stuff done much faster and I find that really difficult because my mind auto-fills in all kinds of things in seconds which are just too much to get into the story, but they affect it. How can I do it in less, I’m always asking myself. I’ve taken that back to longer fiction now too.

Has writing fiction taught you anything you didn’t expect?

I’m not sure. It’s certainly illustrated that I’m a product of all I consumed. I try to remake all that into things that are a bit new. I guess we all do. If I succeed it’s been where I have subverted or inverted things, or argued with them. The thing that most drives me is the desire to express myself, but I often feel like an alien in my own world, because so many things that other writers consider so well–human things–are things I feel I don’t deal well with at all. I don’t like a lot of human behaviour, in myself included. I want things to be pleasant, calm, organised, friendly, cooperative. I worry that I write that too much, that I’m creating more of ‘the cosy catastrophe’ which is a catastrophe because its good features are allegedly an illusion of the author, not a genuine possibility. But you have to. Because there’s so many people in the world creating the massive and real catastrophe.

What have you learned from your own writing? To what concepts, intentional or not, do you think you’ve exposed your readers?

I’ve learned that you can create gods, and you should, but responsibly. I think I have exposed my readers to many things, but what they are and how they were received is for them to say.

Why writing to communicate your vision, and not 2D or 3D art, film, theatre, dance, etc.?

It never occurred to me I could be a part of those other arts. But I wrote fanfiction and stories from a really early age. Also you can write when you want to, what you want to, without dealing with other people’s visions and inputs and criticisms and that suited me. I’m quite a lone wolf. If I need to cooperate now I can, generously as need be, but in the earlier days I really didn’t want to as my own sense of what I was doing felt too fragile. I pick up everything, like copying frequencies, and it takes me a long time to extract myself from other people’s theories and feelings. I’ve learned to do that much better now but in my teens and twenties I was both very sensitive and very intense. I’d describe my inner world at that time as Horrified Blotting Paper. Ick!

It’s great that we can get to the wheels of production ourselves, but it is also fucking exhausting, and I am fucking exhausted by it, and it threatens to completely consume all my energy for writing because I’m fine with the technical aspects of production: writing, editing, revising, proofing, setting, printing. I can’t stand publicity and marketing. Where the public meet the material–no can do that bit. Hard pass. I’m fine with other people promoting their books. I can’t stand trying to do mine. The only way I’ve ever managed it is to create an alter ego – Shirley – who is a really good secretary and definitely not me, to do it. But being Shirley is hard work. I’m a Shirley shirker.

I know that you are interested in mysticism, the occult, spirituality, the paranormal, anything to do with how people make sense of their perceptions (or fail to) and try to fabricate coherent world stories with them. You’ve said that psychology and philosophy relating to how people construct themselves and interpret their own actions and choices interests you, too. Will we see these themes in your work?

Endlessly. I think it’s probably my only trick pony. That and the pursuit of justice and kindness.

Here’s where you can make an excited, intriguing comment about your next work with BVC, or even mention a publisher book that will be sooner.

I’m going to publish a novella with BVC which is part of my Quantum Gravity series (PYR originally in the US and Gollancz in the UK). It’s all about reinventing yourself, even if you have to spend quite a long time inside a vampire wardrobe, or as a piece of glass tableware… I’m hoping to write some more of those for the BVC list too. (The novella WHEN DEMONS DIE is forthcoming soon from Justina and Book View Café.)