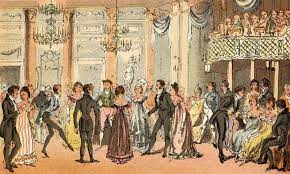 Modern readers can certainly understand how Almack’s was the place to be, the most exclusive of exclusive social venues, because that concept is timeless…but there’s one aspect of Almack’s we haven’t discussed, and I thought it might be interesting to do so.

Almack’s was nicknamed ‘the Marriage Mart’ because it was the place for aristocratic young women and young men (or not so young ones) to go to look over the season’s marital prospects. It was Almack’s very exclusiveness that made it attractive for spouse-shopping: if only persons of a certain social class were allowed within its precincts, then by definition anyone there could be considered “safe” as a potential marriage partner. Watchful parents could relax, knowing that their romantically–minded daughters would not be solicited for the next dance by a shop-clerk or a nouveau-riche City merchant; men would not find their eyes and their fancies caught by an attractive but unsuitable young woman who dropped her aitches and didn’t know how to properly address a duchess or arrange seating at a dinner party. 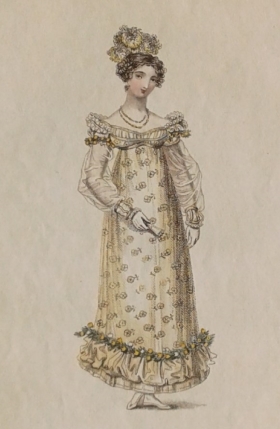 Sounds kind of…well, cold, doesn’t it? Yes, absolutely, by modern standards of courtship and marriage. But the early 19th century was in flux as far as what marriage was all about.

Up until the rise of Romanticism in the 18th century, marriage was as much a financial transaction as it was about finding a husband or wife…and the wealthier the families, the truer this was. Families considered what other families they wanted to ally themselves with through the marriages of their sons and daughters for reasons of outright monetary gain as well as for less tangible but still enormously important assets like social, economic or political influence. You might decide that you wanted your son to marry the daughter of a family whose political support you sought for your career, or who might bring as part of her dowry land or other assets you coveted. And while you made some attempt to make sure the new couple would be compatible…well, that wasn’t necessarily the first consideration. But as the concept of marrying for companionship and love took hold, it fought for a while with the older view of marriage…and Almack’s was a prime example of that uneasy compromise.

It’s also hard sometimes for to wrap our 21st century heads around just how class conscious England was (and still is, to a degree)—just how separately the different social classes lived their lives and the difficulty of moving from one class to another when it dictated everything about you, from how you moved and spoke to your education and expectations in life. Now, think of how that might come into play when looking for a husband or wife…and once again, Almack’s begins to be much more understandable, if not, by our standards, admirable. It’s not so surprising that Almack’s importance faded as class barriers became more fluid with the rise of the middle classes, and by the late 1830s, it had lost almost all its old cachet—not forgotten, but also, for many reasons, not mourned.