A Ride on the Angel Bus 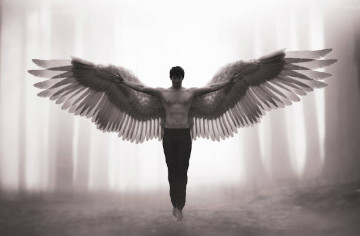 [Ironically, the serial I started back then lapsed—I wrote myself to a point where I got lost, and until I find the trail again, I’m waiting for inspiration to lope along. This is a hazard of writing—the unfinished idea—no matter what technique is used.]

I’ve been thinking of a lot this week about the plague, but again, I’m not going to write about it today because, well, everyone is thinking about it. It’s all weird and the first of a thing anyone in my generation has experienced. Well, maybe polio, but I escaped that one somehow.

Ah, pandemics. We’ve had them. Ebola, HIV, small pox, Spanish flu, poliomyelitis. And don’t forget the original grim reaper, bubonic—wait a minute. I’m not supposed to write a blog about the plague.

I could write about the difficulty of finding a comfortable bra. Or trying to understand why Crocs feel so good. Or getting to the bottom of why my KitKat clock stopped wagging her tail.

But instead, I’ll write about what I’ve been giving considerable thought to: the new serial I am writing.

I love to write this way, starting with character, place, and mystery. I have no clue about where this will go. On Wednesday I begin with nothing in mind; anything could happen, as long as each scene adds a new layer of complexity. Eventually back story and plot will emerge and solidify. Each character holds a secret so close to themselves that they barely know it.

For this serial, I’m moving into the paranormal realm. My chosen ghoulish trope is the world of angels. Angels are fascinating creatures. And since no one but theologians claim to know exactly what and who they are, angels have been subject to a vast amount of amateur speculation. They appear in popular fiction, film, painting and sculpture, short stories, and uncountable young adult and old adult paranormal novels.

I’m in a quandary. If my characters are members of the choir, what are they really like? What powers are angels purported to wield? (There is an angel caste called “powers”, by the way.) “Dudley” in the 1947 film portrayed by Cary Grant and again by Denzel Washington in 1996’s The Preacher’s Wife, utilized assorted powers, including refilling an empty wine glass, gluing David Niven to a chair, and gifting a fully decorated Christmas tree apparently manifested from nothing.

The angels who star in Wim Wender’s Wings of Desire walk among mortals giving comfort where they can to residents in pre-Wall-tear-down Berlin. They may, if they choose, become mortal themselves, waking up prone in a vacant lot with the only manifestation of their angelic-ness—chest-protecting armor—lying beside them. The archangel Michael wore armor, too, required protection while slaying the dragon Satan.

In YA fiction, angels are ranked along theological lines and conflict relies heavily on battles between the fallen and servants of good. John Milton describes the “War in Heaven” from Revelation 12:7–10; Philip Pullman gives a novel skew to one of many angel wars in his His Dark Materials trilogy.

Angels are not only warriors. “Angel” derives from “angelus”, the Latin word for messenger. We can probably blame Milton for the common belief that angels are God’s Special Forces. Anyone who can defeat Lucifer is a real badass. Angels that visit sick, frightened, and despairing mortals send text messages direct to God’s iPhone. Depending on God’s mood or schedule, wishes are granted or ignored.

Any good story begs for a great villain and an even greater hero. In the angel world, these characters abound. They have wings, too. And they are seemingly drop-dead gorgeous, ideal for any suspenseful, romantic plot. That is if angels can fall in love. You’ll have to read the series to find out.

4 thoughts on “A Ride on the Angel Bus”