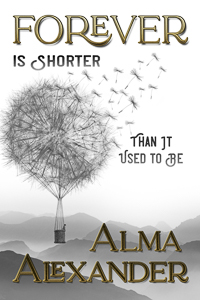 Forever Is Shorter Than It Used to Be
by Alma Alexander

Before the age of the Internet, one of these people might never have known the other existed.

In the early days of the World Wide Web, tenuous cyber-connections might never have solidified into more than shared electrons.

They were separated by oceans lapping shores of different continents, and by an almost unbridgeable gap of years.

Impossible, improbable, unlikely… and yet something drew two people together anyway. Call it love. Call it fate. They found one another against all the odds, they reached out, they touched, they held on. It was strong. It was going to last forever.

But forever is shorter than it used to be.

Alma Alexander’s life so far has prepared her very well for her chosen career. She was born in a country which no longer exists on the maps, has lived and worked in seven countries on four continents (and in cyberspace!), has climbed mountains, dived in coral reefs, flown small planes, swum with dolphins, touched two-thousand-year-old tiles in a gate out of Babylon. She is a novelist, anthologist and short story writer who currently shares her life between the Pacific Northwest of the USA (where she lives with two obligatory writer’s cats) and the wonderful fantasy worlds of her own imagination.

I SUPPOSE IT ALL BEGAN when… but before that, there was… no, two steps back from that we…

This is a story that had no real beginning. It will never really have an end. It existed—it exists—it was always there, and it will never be over.

But now, lost as I am in the interstices of time as the story changed around me in painful ways, I can’t help feeling around for memories, for clues. I keep coming back to the metaphor of a jigsaw puzzle that is my life, and trying very hard to put together the pieces that match in pattern or in shade—except that now there is a piece missing, a piece that will always be missing, a piece I will never have again, and all I am left with of the original image is that thing printed on the lid of the puzzle box, still perfect, but now just a memory and something that I will never again be able to recreate or hold in my hand.

I met a man. He met me. We met each other. We connected. We married. We loved.

And now he is gone.

This book is largely about him and how I lost him—a journey into the darkest heart of grief—but, like I said just now, it all started before that. It started nearly a quarter of a century ago. And what is a story about him, and about loss, begins as a story about us, about finding miracles, about love, about belonging. Because if you don’t know about that, then you will never understand just what it is that has been lost.

At the time we connected, Internet-borne relationships were rare enough (no “swiping right” and dating apps back then). It was largely his idea that we write a book about it—alternating chapters between him and me—but because he quickly came to the conclusion, as he told me, that he “used to think that he was a writer before he met me”, the thing kind of devolved wholly to me—although he DID contribute a little, right at the beginning of it all—and the book we tentatively called “Cyberdance”, as a descriptor of what transpired between us, kept on getting pushed into the archives and onto back burners as I wrote and published (many) other books. Certainly nobody has ever seen any of that material except him and me… until now. Because, well, let’s say that if we can’t really pin down the beginning of this story… let’s start it here. With material that I originally wrote back in 2003. Let me tell you our story, from that beginning.

PrevPreviousA Ride on the Angel Bus
NextThe Name of the Prose, Part 2: The Name is Bond—James BondNext