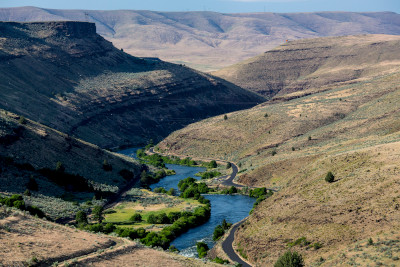 More in my series on life on Mt. Hood.  Unlike a lot of people who never explore their own neighborhood, but rush to experience “tourist attractions” elsewhere, my dear husband and I have made a vocation of learning all sides of our mountain.

T and I have had too much of digital time agendas and pixilated data flow that substitutes for reality.  I gave up on legal forms that deliberately confuse the applicant with redundant and meaningless explanations.  I gave up on trying to concentrate on work when the sun beckoned me outside and the time change confused my brain.

We wanted to experience something new, something different from our usual day trips, so we took a route we’ve done before but not often.  A few high clouds, but nothing serious and the sun breaking through.  The temperatures were climbing toward genuine spring.  The mixed weather as we climbed the mountain formed a fabulous example of a lenticular cloud over Mt. Hood. It does look a bit like the mothership landing…

First stop Bear Springs Camp Ground on the way to Maupin.  Still patches of ice in strategic spots there, so we stretched our legs briefly across a wide picnic meadow near a rustic shelter.  We love those stone and log structures with massive fireplaces and often interesting carvings on the support beams.

Then on to Maupin, a small cow town at the northern edge of the Warm Springs Indian reservation lands.  We poked around the downtown area that’s really uptown, above a serious grade that switches back and forth descending to the Deschutes River.  The community is not brimming with vitality and prosperity, but not dejected and forlorn.  It’s the only spot of conveniences in a fity+ mile radius.  The major industry is supplying goods, services, and equipment to river rafters on the Deschutes.

We opted for lunch at the Stonebridge Bar and Grill.  Good choice.  Good view of the river and train tracks. We watched the white water ricochet from bank to bank as it careened over and around obstacles.  The sign on the cooler says “My town is a tight drinking community with a fishing problem.”  The sign over the bar says “No whining,” and the menu proclaims “Shut up and eat your burger.”  But there’s more on the menu than burgers.  T had an excellent Greek salad, and I had a turkey, cranberry, blue cheese, bacon wrap.  The potato salad was redolent of dill and the corn chips homemade, fresh, and lightly salted.  T even engaged the waiter in a discussion of railroading.

Then we drove along the river a way to Shearer’s Bridge, an old pioneer crossing.  But also and old tribal fishing ground. Those platforms may be only a few years old, but the technique and custom goes back long before first contact with Lewis and Clark.

Winding uphill away from the river we stopped at White River Falls State Park.  The park was officially closed, but we parked by the gate and wandered in.  Shirt sleeve weather and we soaked up some welcome sun.  The falls were roaring, a hidden treasure of wet and green rushing through the high desert.  It looks placid and winding and then dumps dramatically over a one hundred foot cliff.  The amount of water in the plunge belies the shallow looking stream above.

This part of the high desert is full of dramatic contrasts.  You think you’re driving along a fairly level grassland with wide horizons.  Then you round a curve and the land drops away to reveal a wide valley way, way, below you.  It’s not unusual to see “islands” of volcanic rock with steep sides and a grassy mound on top level with your own plateau.  Or you might be atop a mesa that thrusts out into the valley with a stream, much too narrow to account for the size of the lowlands, ambling through it.

But the real highlight of the entire trip was an unusual sight–for me anyway.  We saw the mate soaring on thermals above.

We stopped in The Dalles at some of our favorite small bookstores and an antique mall, then a nice desert and iced-tea.  Still shirt sleeve weather.  But the constant gorge winds picked up dust devils and set my allergies to raging.  As we left town on the long trek through the Columbia River Gorge, cloud shadows dappled the hills.  Just a few miles west the clouds began merging until they formed a solid line across the sky.

We met drizzle in Hood River so we decided not to linger.  Half way back up Mt. Hood we put our jackets on inside the car.

Then at about 3500’ elevation we hit snow!  Freezing level was 5000′ and the highest pass is 4700′ at Mt. Hood Meadows so no problems driving.  Just a nice icing on the day’s cake.  That’s reality, not the craziness we ran away from.

2 thoughts on “A Different Reality”