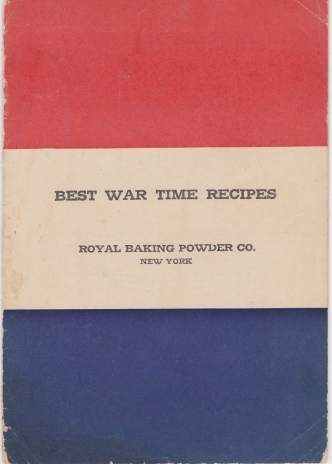 So I’ve been having fun being a tad snarky about food conservation recipes from the first World War and how some of them seem…ah, less than appetizing. I was looking through some WWI era pamphlets recently, however, and found a few recipes that (ssh!) sound as if they might not be too bad.

This might make lovely tea sandwiches on thin crustless bread (from Everyday Foods in War Time by Mary Swartz Rose, 1917).

Here’s a recipe for a chowder that doesn’t seem out of line to this New Englander, though we would use whole milk rather than skim (From Everyday Foods in War Time by Mary Swartz Rose, 1917.)

Salt codfish, smoked halibut, or other dried fish may be used in this chowder. Pick over and shred the fish, holding it under lukewarm water. Let it soak while the other ingredients of the dish are being prepared. Cut the pork into small pieces and fry it with the onion until both are a delicate brown; add the potatoes, cover with water, and cook until the potatoes are soft. Add the milk and fish and reheat. Salt, if necessary. It is well to allow the crackers to soak in the milk while the potatoes are being cooked, then remove them, and finally add to the chowder just before serving.

This one could maybe use some cinnamon and nutmeg (and raisins and walnuts might be good too), but I like that it doesn’t have added sugar—a good recipe for carb-counters. (from Best War Time Recipes by the Royal Baking Powder Company, 1918)

Sift together flour, baking powder, and salt. Add cold sweet potatoes which have been lightly mashed or put through a ricer. Add beaten egg and liquid, mixing well. Bake in greased muffin tins in moderate oven 25 to 30 minutes.

This sounds more like a soufflé than a fondue, doesn’t it? (from Everyday Foods in War Time by Mary Swartz Rose, 1917)

Mix the milk, breadcrumbs, salt, and cheese; add the yolks thoroughly beaten; into this mixture cut and fold the whites of eggs beaten till stiff. Pour into a buttered dish and cook 30 minutes in a moderate oven. Serve at once.

Enjoy! And let us know if you try making any of them!