As we’ve seen in previous posts, World War I impinged on daily life in America possibly more than any previous war…especially in terms of what and how Americans ate. We’ve seen 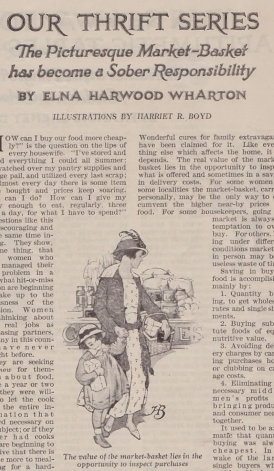 how American women were urged to grow their own food, learn to make substitutions, and observe days without wheat, meat, and other abstentions.

Another aspect of food conservation, interestingly, was how food made it into households in the first place. Before the war, women might have stopped into their local grocers if it was close by and if they needed just one or two things. But more commonly, and certainly for larger orders, the usual thing to do was telephone in your shopping list or send a note to the store. Grocery clerks would gather together your order, which usually involved weighing out measures of dry goods like beans or flour and packaging them up, and sometime later, a delivery truck would appear with your groceries, complete with a boy to fetch them into your house. And of course, payment was handled by account—no cash exchanged hands at delivery.

But in 1917, part of the campaign for food conservation was also fuel conservation: as the cost of fuel rose, so did the cost of grocery deliveries…which of course got added into the price of items. Ladies’ magazines of the time had several suggestions, as can be seen in the article above from October 1917’s The Delineator: buying larger amounts of staples to reduce the number of deliveries (and as a corollary, going in with neighbors to do the same), doing your own marketing every few days and carrying your purchases home rather than having groceries delivered; buying produce, eggs, and meat directly from farmers (and again, clubbing with neighbors to do one big weekly trip to nearby farms.) Some stores also tried changing how they did business, encouraging patrons to come in themselves to make their purchases and to pay on the spot, rather than purchasing on account. 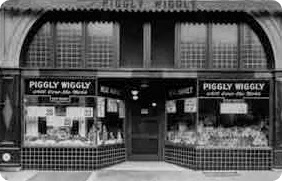 Meanwhile, in Memphis, Tennessee, a quiet revolution was taking place. In the fall of 1916 a man named Clarence Saunders opened a new kind of grocery store. There were baskets at the door for customers to use. All the merchandise was laid out on open shelves, and prices were clearly marked. Nary a grocery clerk was in sight, until you were ready to bring your purchases to the counter to be paid for…in cash, right there on the spot. And then you carried your purchases home. Saunders called his store Piggly Wiggly (no one is quite sure why)…and the idea took off as the country went to war, the cost of fuel rose, and the former grocery clerks all enlisted.

Saunders franchised hundreds of independently owned stores operating under the Piggly Wiggly name…and while produce and meats weren’t sold in them (meaning that independent green-grocers and butcher shops would stay in business for decades longer), the prototype of the modern supermarket was born.