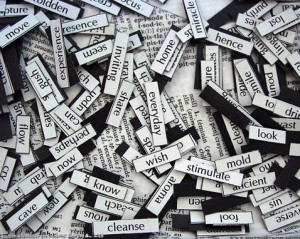 As regular readers of my articles know, I have a bit of an issue with the way that people—especially highly public and influential people—use and abuse language. Some do this intentionally to manipulate their audience; others do it unintentionally out of an urge to vent emotions they don’t know what to do with.

In this vein, you may have heard it suggested by a highly placed Texas official that the protestors in the Dallas rally shattered by gunfire July 7, 2016 were hypocritical for fleeing when faced with a live shooter.

The exact quote was:

“All those protesters last night, they ran the other way expecting the men and women in blue to turn around and protect them. What hypocrites!”

Let’s stop and think about this statement.

Given that protection of the citizenry is in the job description of police, who are sworn to serve and protect, and given that they were doing exactly that when the gunfire broke out, I have to ask in what way the expectation of continued protection was hypocritical? Are police the protectors of the populace only when there’s nothing to protect them from? The police were the trained professionals. The protesters were just citizens exercising their constitutional right to assemble peacefully.

The statement is explicit in its intent that the protesters should have done something other than run. All right. What might that be? Did the official think they should rush the shooter as other officials have suggested should have happened during past mass shootings?

Let’s look at that scenario. The first question that arises is where should they rush to? It wasn’t  immediately clear where the shooter was—several stories up in a parking garage. Certainly, I’ve seen movies in which a crowd of people see the muzzle flash from the bad guy’s gun (not nearly as bright in real life as with Hollywood magic). Someone points and yells, “There!” And they’re off to the races. But those are works of fiction. Those are actors under the control of a director.

Back to real life. Let’s assume that most of the protesters were unarmed. They could have formed a human shield for the police in order to protect them. But that would require overcoming the involuntary instinct to flee danger AND the knowledge that the shooter wasn’t randomly mowing people down—that he was targeting only white police officers.

Does this official intend that the protesters ought to have overcome their instincts, assumed that they were not the shooter’s targets (based on what evidence?) and acted as a group on that assumption? Is that expectation at all rational? (In fact, some of the protestors did surround fallen officers and helped get other people out of the danger zone once they realized what was happening.)

But surely some of the protesters were armed. Texas is a legal carry state, after all. We know that at least one person in the crowd had a gun and probably more did, so this was in no way the stereotypical ”gun-free zone” that is supposed to be so attractive to mass murderers. Let’s consider the idea that this was an occasion in which good guys with guns could have changed the outcome in a positive way. Let’s picture the scene we see in the many videos and imagine what it would have looked like if a bunch of protesters pulled out their guns and began firing at the spots each of them thought the sniper’s bullets were coming from.

Does anyone see a scenario in which they do not become targets themselves in the confusion?

Remember, the police reported two shooters, then four, then one, then multiple shooters again. The most recent reports say there was only one shooter, but three other people are in custody. And of course, there was the unfortunate Mark Hughes, a law abiding gun owner who was marching with the protesters carrying his long gun, and who was misidentified as a suspect in the shootings. Given the chaotic circumstances, it’s a credit to the Dallas PD that this young man was able to flag down a law officer and hand over his gun without being shot, himself. There were also reports from protesters after the fact about shooters at street level.

Here’s my point: if there’s this much confusion about the sequence of events two days later, how are we to expect that armed protesters would be helpful if they drew their weapons and began looking for somewhere to aim them? How would the police distinguish these good guys with guns from the bad guys? How would the good guys with guns distinguish each other from the bad guys? 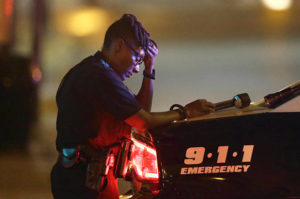 Does anyone think it’s reasonable to expect that having dozens of citizens produce weapons under these circumstances would be a good thing? Does anyone think it would cut down on the loss of life or help rather than hinder the police?

So, what, really, is this official saying? If it was hypocritical for the protesters to scatter when the gunfire started, what might they have done that would not be hypocritical … or foolhardy, or dangerous?

What this official is saying, I think, is ”I’m angry. I’m frightened. And I don’t know who to blame, but I have to blame someone.” He has a lot of company. But this human urge to react to the unimaginable, the terrifying, the inexplicable, with anger—to lash out at the first target that presents itself—is precisely what led to the shooting in the first place.

If we’re looking for rhetoric that must be discouraged, surely rhetoric that strikes blindly and nonsensically at the first available target is it. This official’s words are content-free in context with the situation they are about, they communicate neither facts nor truths, but only fear and anger—two things we need less, not more of.

1 thought on “The Things People Say: A Simple Reality Check”