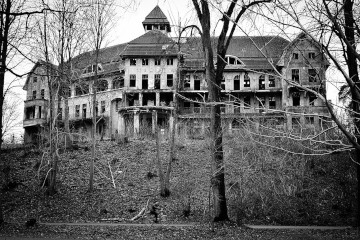 I’m watching my favorite Halloween movie as I write this. Directed by Robert Wise, Claire Bloom’s clothes by Mary Quant, and starring the incomparable Julie Harris. Black and white. 1963.

And the novel this movie is adapted from is one my favorite books by one of my favorite authors.

As with most novels—there are exceptions—the books are better than the films. Necessarily films must economize the written work because of time. Wikipedia tells me, however, that the Jackson novel, The Haunting of Hill House, is under development at Netflix as a series. This often doesn’t improve the book-to-movie process—Game of Thrones is an apt example of that. However there is hope that more of Jackson’s superb writing will come to the screen.

“Within, walls continued upright, bricks met neatly, floors were firm, and doors were sensibly shut; silence lay steadlily against the wood and stone of Hill House and whatever walked there, walked alone.”

I first read the book when I was about eleven, I think, when my reading habit always included reading in bed before sleep. One night I read the creepiest ghostly passage ever, with imagery I could clearly see and that I remember to this day.

Because the film is equally as frightening as the book, I love both of them and forgive the film’s flaws—the novel has none. Many of my favorite scenes are missing from the film: the unseen walker in the grass, the haunted picnic, the Planchette reading,

Shirley Jackson is one of my goddesses. Her spare, off-kilter prose, her ability to illustrate hostility between “classes”, her deeply troubled characters—I love all of it. My other very favorite Jackson book is We Have Always Lived in the Castle. Reading this one also as a preteen, I identified with the quirks of Mary Katherine Blackwood. Jackson never gives her age, but she could be anywhere between 13 and 29. And thoroughly insane. In case you haven’t read it yet—I thoroughly recommend this relentless, creepy story of a New England family and their community—I won’t say any more than that. I yearn for the film to be made some day, and at the same time worry that the screenwriter/director/producer sausage machine would make baloney of it.

In Private Demons, the 1988 biography of Shirley Jackson by Judy Oppenheimer, Shirley is quoted describing her experience of writing The Lottery.

“Writing the story, I found that it went quickly and easily, moving from beginning to end without pause . . . except for one or two minor corrections, it needed no changes, and the story I finally typed up and sent off to my agent the next day was almost word for word the original draft. This, as any writer can tell you, is not the usual thing.”

I made use of We Have Always Lived in the Castle in my short story The Alzheimer’s Book Club, originally published by Tom English in Bound for Evil: Curious Tales of Books Gone Bad in 2008. I think a little of the Shirley Jackson “Lottery” magic was at work there, because it “went quickly and easily”, and required very little editing.

My other favorite Halloween movie is a popular gem. Again, from my vintage film-obsession collection, it takes place on a Halloween in Brooklyn in 1939. The family of misfits is called Brewsters. And a further hint: one of them believes he is Teddy Roosevelt.