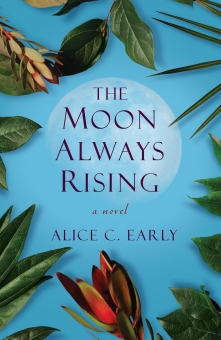 I’ve been reading several books selected by the International Pulpwood Queens & Timber Guys Book Club, now that my novel Pause has been chosen as a 2022 title. I look forward to “meeting” Alice C. Early this week via the weekly Zoom get-togethers hosted by Kathy L. Murphy for PQTG authors and readers.

The beautiful tropic-themed cover and Caribbean setting were like catnip to me, and I instantly became absorbed in this twisty story of island light and shadow, culture shock, toxic secrets and redemption, and immersion in the vibrant land and seascapes.

33-year-old Eleanor “Els” Gordon arrives on the tropic island of Nevis as a literally hot mess, forced into this vacation by her arrogant boss. She’s grieving her fiance (murdered back home in Scotland), and then various new catastrophes quickly deliver more nearly-fatal blows. Including a hurricane! She ends up the owner of a derelict plantation home and garden on Nevis, impulsively bought with what turns out to be nearly the last of her funds. She determines to resurrect “Jack’s House” and make a new life here. She doesn’t realize that she’s also “bought” the resident ghost, called a “Jumbie” by the locals. Scenes of her troubled past in Scotland help illuminate her traumas that she tackles by tackling the house repairs, and along the way the meets both resistance and warmth from various colorful locals.

Impressive for a debut novel, “Moon” casts a seamless spell of description, dialogue, and distinctive characters, rolled out with irresistibly quirky details and smooth pacing. On the second page, we see through Els’s eyes on arrival:

“Just beyond the boundary sign for the Parish of St. Thomas Lowland, dung-splattered sheep milling in the road halted the van’s progress in front of a cinder block wall. Higher up the hill, Els glimpsed a house nestled into the slope. Unlike the pastel concrete dwellings they’d passed, it looked ancient, a survivor with proportions that charmed her. Its weathered shingles and native stone walls stood in counterpoint to the riot of color poking through the garden’s devastation.” This first glimpse of Jack’s House sets the tone, as well as themes of survival and recovery.

I’m trying to avoid spoilers, so won’t go into specifics of characters’ secrets and betrayals, but Els quickly encounters resistance to her impulsive relocation from some locals such as skeptical sailors and actively hostile local politicians with their axes to grind against her plans for her new home. She also receives warm welcomes from some natives, even as she answers their island patois with some of her own Scots brogue. Author Early avoids cultural cliches, and each character is unique and believable, several with their own personal baggage to air during the process of Els’s reinvention.

Since I spent some years living on various Caribbean islands while working as a Scuba divemaster, I was happy to see that Early captured the essence of these islands and cultures (each island unique, of course), from the accurate native patois to the complicated social structures of locals, newcomers, and tourists. Having experienced both incredible warmth and dangerous hostility in my own island sojourns as a forever-newcomer, I applaud Early for her clear-sighted depictions gleaned from her own extended stay on Nevis. In the end, the healing power and beauty of the island emerges from the fray.

I also had my own run-ins with mischievous spirits of “Jumbies” during my island sojourns, where the inexplicable was an accepted part of life, as it is in Early’s novel. If you’re eager for more than a prettified virtual vacation, dive in to “Moon” and come away with some unexpected experiences and friends to remember!

You will find The Rambling Writer’s blog posts here every Saturday. If you’d like to dive into more Caribbean adventure and mystery, Sara’s novel ISLANDS from Book View Cafe publishing draws on her experiences as a scuba divemaster in the Virgin Islands and Honduran islands. “A superior mystery and suspense novel… a stomping, vivid ride.” (Statesman Journal) Sign up for her quarterly email newsletter at www.sarastamey.com