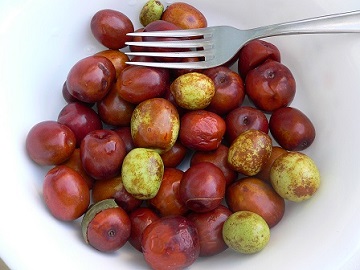 The featured image today is from here.

We had two huge pine tries at the southeast end of the property. One fell down in a storm last year and we had the other one taken out a few weeks ago. The entire southern section of the property was driven by these trees. Substantial sections of fruit trees, grapes, and garden now get up to twice as much sun as they did before.

This has had interesting effects. For one thing, cedar apple rust from the nearby cedars didn’t affect the apples as much. (With the exception of the Granny Smith. It seems to reflect the wet June more than the other varieties.) The grapes are now practically ripping themselves out of the ground. Two varieties (Himrod and another I don’t recall at the moment) have been doing poorly. They are now doing well. We have flowers.

We’ve been struggling with watermelons for years. This year we’ve been getting much better germination.

In other areas, we’ve been having germination issues. The snow peas never came up. I wanted to try sugar beets this year. We planted three times with two different packets of seeds without success. We’re trying to germinate them in the greenhouse to see if it’s a temperature problem. This has been another cold, wet June—last night got close to the forties—and that has an effect.

We planted some new fruit trees. Some are doing better than others. We planted two jujube trees and one came in and the other is struggling. We had jujubes (also called Chinese Dates) and liked them so we’re attempting them here.

The Bloody Butcher corn is up and we have zucchini growing at one end and butternut at the other with beans planted around each corn stalk—the traditional “three sisters” approach. One group of beans germinated. Another did not. The ones that did grow were seeds we saved from last year. The ones that did not were store bought this year. The sugar beets were also store bought.

Hm. Could there be a pattern here?

We have three varieties of short season melons we’re trying this year—again, I forget the variety names and I’m too lazy to go downstairs and get the seed packets. I’ll report on their progress later in the summer.

The only really successful watermelons we had was the drought year when Ben was born, 1997. We have a great picture of Wendy holding Ben in one arm and pointing at the melon with her other hand.

The other news to report is how well the Birdies raised beds are doing. We purchased one set early in the year. The potatoes are looking very nice and the carrots between them are sprouting up their tiny, hairy leaves. So far, the deer are leaving them alone and the bed is too high for the bunnies.

Speaking of bunnies, we also lined the bottom three feet of the garden fence all around with plasticized chicken wire to keep them out. We lost many crops to them last year the way we lost the strawberries to the chipmunks. We have no outdoor cat this year but we’ll manage: Bugs is going down one way or another.

I’ll pull up a complete list of new trees for this year and a garden plan, if anyone is interested.

Back to work for me.