Laldasa by Maya Kaathryn Bohnhoff is now available in print!

BVC is pleased to announce that Maya Kaathryn Bohnhoff’s novel Laldasa is now available in a print edition! 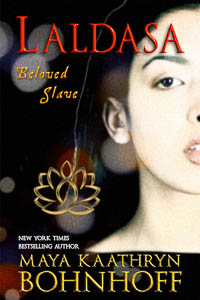 Laldasa is Sanskrit for “beloved slave” — a fitting title for a story of class boundaries, racial prejudices and the one power capable of overcoming them. It’s the story of one small woman battling a political machinery over which she has no control and one supposedly powerful man who realizes that he is as much a pawn of the machinery as the casteless woman he befriends.

Anala Nadim is a free woman until she travels to the planet Mehtar to procure supplies for her father’s mining operation on Mehtar’s impoverished sister world—the colony planet Avasa. When a twist of fate enslaves Anala to the Lord Prince Jaya Sarojin, she is thrown into a battle to free herself from slavery and her world from subjugation to a corrupt Mehtaran consortium. So begins a tale of greed, betrayal, political intrigue and love that threatens to tear Anala from her spiritual path, and introduces both her and Jaya to true darkness.

About the Author: Maya is the New York Times Bestselling author of The Antiquities Hunter (a Gina Miyoko Mystery) and Star Wars Legends: The Last Jedi (with Michael Reaves). She became addicted to science fiction when her dad let her stay up late to watch The Day the Earth Stood Still. Since then her short fiction has been published in Analog, Amazing Stories, Century, Realms of Fantasy, Interzone, Paradox and Jim Baen’s Universe. Her debut novel, The Meri (Baen), was a Locus Magazine 1992 Best First Novel nominee. Since, she has published over a dozen speculative fiction novels. Maya lives in San Jose where she writes, performs, and records original and parody (filk) music with her husband and awesome musician and producer, Chef Jeff Vader, All-Powerful God of Biscuits. The couple has produced a series of music albums: RetroRocket Science, Aliens Ate My Homework, Grated Hits and Shrödinger’s Hairball (parody), and the original music CDs Manhattan Sleeps, Mobius Street, and I Remember the Rain.

She experienced her emergence through the layers of darkness and pain as an uphill struggle through an oppressive storm. Every breath came at a price; every movement was agony.

Had she lost her breather? She didn’t remember. She gasped for air, expecting the sting of wind-driven sand on her skin, the taste of it in her mouth. But the air was too thick, too warm, too humid.

How could that be? It was autumn. Snow and ice were the only forms of moisture natives of the Kedar knew at this time of year.

Up through the muddle of sensations she climbed, groping toward light. She smelled vegetation, lush and sweet, heard the soft trill of water over rocks.

Wrong—that was wrong. Surely she was hallucinating.

Adrenaline seeped into her veins. She knew, too well, one familiar scenario that would account for hallucinations—that she had fallen through an old sink shaft into a pocket of manda gas. She willed the adrenaline to rouse her; manda fumes were slow poison. They fogged the mind, befuddled the senses, and eventually destroyed both.

She saw light and leapt after it. Made out indistinct shapes—a play of sunlight and shadow. But the sunlight was too bright, the shadows too dark.

She came to on a surge of near panic, disoriented by surroundings that made no sense. She was lying on a bed of grassy turf, overshadowed by softly waving greenery. Ferns—alien, and dripping with dew.

Wrong. Oh, wrong. There were no plants like these …

She tried to lift her head and all but swooned again at the pain. Memory rode the storm of agony. Fragmentary, but complete enough that she knew she was not on a mountain slope in the Kedar. She was not even on Avasa. She had come to the inner planet of Mehtar to …

There the memory failed. She rolled onto her back, slowly, carefully. Her right hand and forearm plunged into cold water.

Gasping in surprise, she rolled again onto her right side, bringing all her senses to bear on the stream. It was no more than a rill, wending its way through the foliage, sparkling where the sun kissed it. But it was clear, cold, and liquid.

She brought her face close to the surface of the water, used a cupped hand to fling it into her face, carry it to her mouth. Her senses steadied and cleared. The pain in her head steadied too, seeming to subside with every breath she took of the warm, moisture-laden air.

The nape of her heck stung when she trickled water over it. She touched it gently with trembling fingertips. They came back spotted with blood. How had that happened?

She breathed, drank water, bathed her face, and waited for the answer to come. It did not. Finally, she dared to sit up. She was at the bottom of a little slope in a tree-shaded glen choked with ferns. The air was heavy with the sweet perfume of alien flowers. Sitting, she was challenged to see over the nodding fronds.

Above her, clouds roved the sky, fat with the threat of rain, now masking the sun, now revealing it. Below her a jumble of colorful carts, tents, and stalls were scattered across an open meadow. People scurried around and between the little nomadic shops, rolling out awnings, setting out wares. On any world that was recognizable as a bazaar.

Memory fluttered. She had come to Mehtar, to the capitol city of Kasi, to buy mining supplies.

The flutter became a flood. She had had money, but no more. It was gone along with her pack, her cloak and—she put a hand to her throat—the necklace that had held her leaf, her personal identification.

Despite the warm air, a hard chill settled in the pit of her stomach. She knew who she was—she was Anala Nadim of Onan, Kedar province, but on this alien world she was no one. She had no identity, no money, no family, no friends. And she had no idea what to do or where to go.

But go, she must.

Shakily, Anala got to her feet and stumbled down slope toward the bazaar. Before she had taken two uncertain steps, it began to rain.

PrevPreviousSo You Want To Commit Novel: #4 Characters
NextBVC Announces The Girlfriends of Dorian Gray and Other Stories by Gregory FrostNext