Lace For Your Life 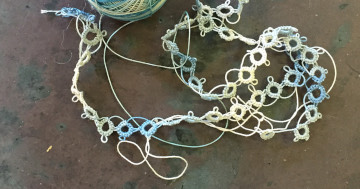 When I was in grade school, I watched a film strip about Spain for social studies. The only thing I remember about that film strip – indeed for much of that entire year – was the image of a little girl making lace. She used about a dozen threads wound onto cards and she wove those threads rapidly into a pattern unique to her family that had been passed from generation to generation.

I was fascinated. The images stayed with me to this day, several decades later. The idea of creating beautiful fabric from air and thread remains a passion.

Without realizing it, I embarked upon a life long quest to make lace within a year of watching that film strip. Embroidery, knitting, crocheting, and sewing became a part of my everyday life.

And then one magical summer at a county fair I found a doily on exhibit made of tatted lace. Despite the efforts of crossword puzzle designers to teach us otherwise, tatting is just one form of lace making. It closely resembles macramé in structure, a series of double half hitches built onto a drawstring. I studied that doily for as long as my mother and sister would allow. Serendipitously, a month later my local community school offered a class in tatting.

My mother gave me her mother’s tatting shuttle as a reward for completing the class. Of all the family heirlooms, I value this one the most. Let my sister have the diamonds, I got the tatting shuttle.

Thirty years later I still treasure that shuttle though I don’t use it any more. It’s made of celluloid to look like ivory and becoming quite fragile. About 2.5 inches long, it has a little pick on one end. That’s unusual for the time period it must have been made. Sometimes I think that shuttle taught me to tat. I’ve won numerous county, state and international prizes for the lace I’ve made with that shuttle.

My love of tatting led me the Portland Lace Society in Portland, Oregon. Within a year of joining I discovered bobbin lace. This form of lace is what the little Spanish girl wove. She had her threads wound onto cards, most styles use bobbins, little spindles of wood, some with a circle of beads on the bottom to keep the bobbins from rolling and over-twisting the threads. This of course leads to collecting both bobbins and beads. But that’s another story. The weight of the beads adds tension to the thread and keeps the pattern even. To keep the entire mass of threads and bobbins organized we work upon a pillow. Not just any throw pillow found on a sofa – though those will work – we have special pillows filled with straw or wool, or exotic forms of Styrofoam that forgives you for sticking pins into it, and covered in sturdy twill or upholstery velvet. We weave the threads without a loom. Pins stuck into the pillow anchor the pattern until completion.

I can crochet lace, I can knit lace. I’ve made needle lace and netted lace. The last form is actually the same technique as making a fish net, but the threads and needles are hundreds of times smaller.

Complicated? You bet your sweet tushy it is. And that’s the joy of making lace. An intellectual challenge, an exercise in patience – and frustration. It’s a puzzle that requires complete concentration. I often fall into a deep meditation trance while lacing, counting the twists and crosses, placing the pins, listening to the faint click as bobbins and beads touch each other…

Like any art, the satisfaction comes from the doing. The finished project is the bonus.

But then the object of our journey through life is the journey, the process, and not getting to the end in a hurry.