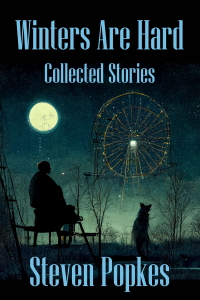 Winters Are Hard
by Steven Popkes

Everyone knows winters are hard.

Merle is homeless on Coney Island. He keeps remembering things from long, long ago.

Harry Linden owns a failing parking garage and has to hire an alien to make ends meet.

Tomas Coban is a retired dictator. He was never quite sure he had done those things for which he was blamed. He meets someone that is certain of it.

Jack Brubaker just wanted to be with and protect his wolves.

They all have one thing in common.

They know winters are hard.

Steven Popkes lives in Massachusetts on two acres where he and his wife raise bananas, persimmons, and turtles.

Buy Winters Are Hard in the BVC bookstore

Read a sample from
The Old Woman and the Moon

The beginning of the tale is always important.

A long time ago, long before even the wet bricks of Sumer were laid down and nobody had ever heard of Gilgamesh, a magician fell in love with the moon.

The moon in those days had no seasons, did not wax or wane. Its light was constant throughout the night. It was this constancy that had first attracted the magician’s love.

The moon felt the same and they carried their tryst over a decade until one day it was no longer enough. The magician vowed he would be with his love at all costs. He studied for years the inner flows of rivers and communed with cephalopods, observed the clockwork mechanisms of the stars and discussed the task with the tides. After he had sufficiently prepared himself, and under the face of the full and constant moon, he climbed a tall mountain and cast his spell. For three days, he wrestled with the sky and the sun. When he awoke, the top of the mountain had been sheared off as if cut by a great knife. The forest had been broken and flattened in all directions as far as the eye could see. The night sky was clear but empty. The moon was nestled in the crook of his shoulder, smiling and asleep.

Buy Winters Are Hard in the BVC bookstore