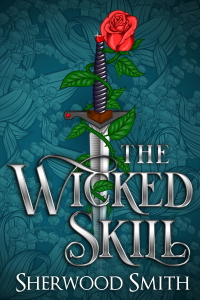 The Wicked Skill
by Sherwood Smith

A summer of roses and revolution

In this fantasy of manners we have two displaced young kings, one shopkeeper’s daughter who went away an ugly duckling and returns five years later a beautiful and very well trained swan, and a young queen who is master of all she surveys . . . until she isn’t. The result is the last summer of love and adventure on the eve of cataclysm.

The Wicked Skill, from a poem by John Donne, duels and dances with discovery of the many facets of love—set against a background of revolution, one conducted through manners, the other by swashbuckling youths who think life is a game . . .

This is also the story of a shopkeeper’s daughter who once saved the world, then went away to learn who she was. It is a story of trust and betrayal; it is about the different faces of love, and it is about the sovereignty of music.

I invite the reader to follow me, for a short time, away from Sartorias-deles and to its sister world, Geth-deles, forever circling the sun Erhal opposite one another.

In this world, made up of uncounted islands in a world-spanning sea, we come to a very small island midway in a set of archipelagos, where a one-person boat has just skimmed into the tiny harbor.

“Sister Orchid is back!”

The place: an old and famous mage school exclusive to those who identified as women, built centuries ago above a quiet bay on an island on the world called Geth-deles, opposite to Sartorias-deles in circling around the sun Erhal.

The time: afternoon, as rainclouds departed.

Prospective students left their names at the door; over the past few years a medium-tall, reed-slim girl who now appeared to be somewhere in her mid to late teens had worked her way up the ranks to become the current Sister Orchid.

The young gardeners paused to watch Sister Orchid bring her sailboat to the end of the floating dock and tie it down one-handed. She swung her baldric over her unbandaged shoulder, and patted her rapier into place with nearly five years of unthinking habit. Gazes raked over her oval face dominated by large eyes so light a brown they looked golden in most light, framed by tousled wheat-colored braids swinging against her hips, thence to the arm in a sling.

Questions semaphored between the girls—would Sister Orchid be promoted to become the new Sister Sandpiper, or would she be sent to seclusion for being two months late, and where had she been, anyway?—until called to order by the supervising elder sister, who added, “I’m certain we’ll find out soon enough what happened. Once we finish our weeding.”

The quicker ones got the hint and began to yank weeds with new vigor as Sister Orchid slipped inside the heavy outer doors, relicts of wilder days.

Sister Orchid crossed the outer court, encountering more friends among the students, young and old, but no one impeded her as she walked down the tiled halls cooled by breezes off the tended waterways, the hiss of her sandals the only noise.

By the time she reached the office of the Eldest, the senior staff had agreed on who would remain to interview the late arrival.

The three women sat on cushions as Sister Orchid entered and put her hands together in the gesture of respect all Ones extend to each other, youngest candidate to the eldest, their chief. The three mirrored her greeting, and the oldest indicated the cushion placed before them.

Sister Orchid unslung her baldric and set it aside, her pack next to it, before sitting cross-legged with the unconscious grace that characterized her. A wince tightened her features as her elbow in the sling jogged against her knee, indicating that the wound in her shoulder was fresh.

“I apologize for the long silence,” she said—tired enough that a slight trace of accent rounded her vowels. “I dared not trust magic communications. It was compromised. And I couldn’t find any Sister Ones to pass word through.”

The eldest leaned forward, hands on knees. “Word might have been impossible—we all know that events can overtake one—but rumors have reached us of duels, manifold inquiries still being prosecuted in four different courts of appeal, and the smoking ruins of a government?”

“All that in two months?” The middle mage, she of the salt and pepper hair, straightened upright. “I am astonished you were not gone two years.”

The youngest said, “Of course it would be you, the best student we’ve had in generations.”

The eldest sat back: neutrality, surprise, eagerness tempered with flattery. How would this brilliant young sister respond?

Sister Orchid dropped her gaze to the arm curled against her. “Anyone who’d been sent to that particular Sister One at that particular time would have done the same. Or better,” she breathed, suppressing the instinct to touch her throbbing shoulder.

“Were you then a messenger or a catalyst?” the eldest murmured, white brows raised.

Many prospective candidates who had longed to join the exclusive, prestigious and powerful mage school could not encompass the training that channeled the instincts of competition and self-importance into acting for the good of the group, but that had never been the wounded girl’s problem. The self-denial of her early childhood had nearly driven her to self-immolation.

Long, dark lashes framing those thoughtful golden eyes lifted. “I had to act. Fast. There was no one else, and you train us in covert movement as well as in defense.”

“You fought the assassin yourself?” the eldest asked.

The girl before them—not born on Geth—had soared up the levels from beginner to advanced in all subjects and skills, faster than any student in memory, and in certain regards she was advanced beyond some instructors.

But, the eldest reflected, in crucial ways she was still so very young.

“We would like to think so,” said Sister Clematis, she of the salt-and-pepper hair, “but we all have strengths and weaknesses. Not every sister, sadly, would do as well against a trained assassin.” She looked puzzled. “And yet, from your words, that would seem to have been your first encounter, two months ago. But you move as though the wound under that bandage is quite fresh.”

“It is. The assassin I disarmed with no blood shed, and is in trial now. This wound is from another duel, one I lost two days ago.” The golden eyes shuttered as memory gripped viscerally: the brush against her ear of soft hair that had never known weather until recently, the accented whisper, I’m sorry, but my orders are clear. And I had none about you. Then the lightning-fast feint and the cold/hot shock of honed steel sliding deep into her shoulder. “I could not save a friend’s brother from being taken by Norsunder.”

“I am sorry to hear that, and I share your grief,” the eldest stated mildly. “But we are waiting for your summary of previous events.”

Out it came, in exemplary concision, as the girls were taught: no false modesty or coy self-effacement, no brag. Simply—or dauntingly—a series of events beginning with a spoken message that led to the rescue of a guild chief who’d reported evidence of embezzlement. After that, the fight to disarm the assassin, whose thoughts during the duel had revealed clues to a secret cadre poised to overthrow what turned out to be a corrupt government. This government, she had discovered, was busy dividing among themselves the vanishing treasury of an island group, while inventing a naval crisis to cover their actions.

The naval crisis—a pirate attack orchestrated from within the government—led to a harbor battle that ranged up into the capital buildings. All headlong events, each propelled by the revelation of secrets requiring instant decision, action, reaction, all accelerated by the intensity of emotion, because there is always a human cost.

“ . . . and then I was taken to meet Daumnek-Pol Leteur, leader of the sea guild defenders, whom the government had been blaming for attacks, treason, and insurrection, but in my interview I discovered that he had spoken the truth all along.”

Sister Orchid brushed fingers over her high forehead. “So I, with the Sister One, facilitated a meeting between Leteur and the guild representatives. And when everything was settled, or so I thought, a friend begged me to track his brother in the mental realm . . . and, well, that led to the encounter I lost . . .” And she forced herself to detail how she had lost.

The eldest remained silent, scarcely heeding those details. She already knew most of them. She listened to Orchid’s assessment of what she’d been taught, until the well-meaning questions, exclamations, and praise by the other two began distressing Orchid, whose voice quieted to a near whisper, her expression of calm belying the tightness of her posture.

When Sister Orchid’s fingers drifted up to touch one shoulder, the eldest waited for a natural pause, and spoke up at last. “Perhaps we might return to this discussion after Sister Orchid has had a chance to recover a little.”

“Excellent idea,” Sister Clematis said. “Orchid, dear, I want you to know that the rest of your cohort is eager to embrace you among them again as soon as you are ready.”

The eldest saw that kindness, with that undertone of eagerness, was almost more than Sister Orchid could bear, and refrained speaking as she led the way to the wing where girls and women who, for whatever reason, required the benefits of seclusion. Here, Orchid was left in a pretty infirmary room overlooking the smaller waterfall, and the eldest returned to the flow of duty.