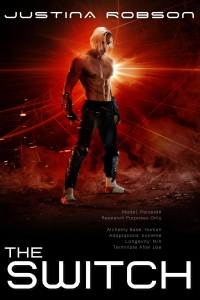 The Switch
by Justina Robson

To win his freedom Nico must give control of his body to secret agent, but will they give it back without a fight?

A model society demonstrates perfection, even in those in chooses to make defective.
For engineered humans Nico and Twostar this means a life of degeneracy, crime and punishment.

But a rogue agent put an extra dose of survival in their mix, so when they’re offered a dangerous technology to escape from gang life, they take it. No matter the price.

But the stakes are higher than advertised.

This groundbreaking new novel from one of the genre’s most respected authors is a thrilling mix of science, magic and politics.  (Orion Books)
Actual Review from human being

“So buy this book and read it for the zinging story, the real challenges here to stereotypes, assumptions and conventions, the characters – but most of all because it is, at heart, first rate SF.” David Harris, 5-star reader review on Amazon UK

Buy The Switch at BVC Ebookstore

One: is the loneliest number

The Inquisition Judge glared at me.

A prickle of fear spiked down my back.

My lawyer looked at me through the toughened smart-glass shields that separated us. Her forehead was shining with perspiration.

The Judge’s expression said that the battery acid of my trial was eating at her insides and she was glad it was over.

I stared at her robes as she carried on talking, taking in all the details to distract myself. The sun and moon planetary emblem of Harmony gleamed softly with their perfectly balanced light. The stars in orbit around them had that cupcake-frosting look the state animations had adopted lately.

‘Nico Perseid, you have been found guilty of the murder of Dashain VanSant in the first degree. The sentence for this crime is death. You will be taken directly from this courtroom to the autoclave at Khor’s Gyrus and there be terminated without delay. Born of the Sun, so we return to fire and light. Az, Lord of Light, and Muz, Lord of Contrite Reflection, guide your path to the next life.’

The prickle of fear became a trickle of sweat. I closed my throat against the sudden urge to vomit and glanced at my lawyer. She’d promised that the contraband wetware I’d had fitted was too golden to fry, hot or not. It didn’t matter what happened in court, I just had to act my part so it looked like I was going the normal route to certain doom and then…

Actually, there was no detail about the ‘and then’.

What if there was no ‘and then’?

The compulsion to vomit reversed polarity. I had to concentrate on not shitting myself. It amused me, to feel that in spite of everything it had faced, my body figured this empty, dry moment was something worth fleeing. Then again, it’s always been on the money. Dying in a street fight was an ordinary thing, a fair thing. The state killing you, that got the juices of injustice going full pelt.

As the observed minute of silence following my sentence expired the Judge added her signature to my execution order. You live your life in the Cloud, nothing real, but they do death old-school, on vellum, with black blood running out of a dead bird’s feather. I don’t know who the fuck that’s meant to impress. An Alchemist could tell you, if they were high up enough in the echelon; I guess they’d say that every choice and action has power and that even on those without psi or magical abilities such things have their voodoo power to alter reality through suggestion alone. I’m a sceptic so I’d have to conclude that its purpose is to legitimise state murder with a ceremony of apparent worldly significance – or that it’s a ton of bullshit that gets everyone’s juices going so they can better enjoy it.

I tried to slow down time by staring harder at those frosted fucking stars, but the Judge kept on signing sheets.

‘All rise.’ The court burst into small movement.

Spots danced in front of my vision. I took a breath. Breathing. That seemed like a good thing. Breathe in, no fear. Breathe out.

I wished I’d killed VanSant. Both he and I would have deserved it. The loss of that death was a sudden deep stab of grief. I didn’t even have the memory of it to comfort me in my last hour. And there we were in bitterness and rage — a poisonous, sour combo that never fails to close down the gut into a pressure cooker.

I should let it go, I’m the only one hurt by it and I’m the injured party here. But it’s so fucking hard to let it go. The things that kill you make you feel so alive. Briefly.

I looked at my lawyer as she stood up. She felt in her pocket and drew out a smoothly squared handkerchief that she folded and refolded with meticulous accuracy before patting her brow. She met my gaze, but I couldn’t read anything into her expression other than a professional glaze of sorrow that anyone could’ve practiced for a moment like this as they watched their career tank.

My guts, which had been sour mash a second ago, turned to cold iron.

It’s a whole vibrational upgrade for me. At this rate I’ll be Enlightened before I get vaporized.

Buy The Switch at BVC Ebookstore