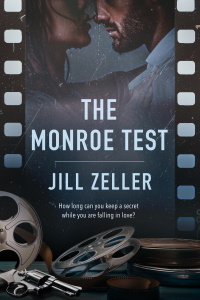 The Monroe Test
by Jill Zeller

The emergence of a long lost Marilyn Monroe screen test for Alfred Hitchcock overturns a young woman’s life, and the violent secret kept by the man who loves her threatens both of them.

After losing her sister in a terrible climbing accident, Sydney Wormley’s life spins out of control. But lately things are looking up. She’s broken it off with her married boss and has begun dating handsome Adam Gray. But Adam has dangerous secrets.

Five years ago, Adam’s brother murdered their mother and mutilated their father. Jon’s been in prison since, and Adam’s had nothing to do with him. But suddenly his brother wants back in Adam’s life, and he may not be done with the job he started five years ago.

Everything crashes together when a priceless can of film is stolen from Sydney’s Aunt Violet. It contains a long lost screen test of Marilyn Monroe. Now Sydney’s getting texts from her dead sister. Adam’s getting emails from prison. Then someone gets murdered.

Sydney had thought her life was finally getting back to normal. She is perilously wrong.

Monroe smiles for the camera, doing her Monroe thing, tipping her head, laughing, making kisses with her lips. Aunt Violet would say Hitch would have hated that. The ice-queens of the Hitchcock movies, cool blondes?Marilyn didn’t fit that mold with her body and her girl-beauty.

The clip is in color. Sydney didn’t realize that. After a few more seconds of simpering, there’s a change. Here is Monroe, blowsy blond hair pulled back in a French twist, wearing a severe pale blue suit; glaring red lipstick is replaced by pale pink, and the makeup?Monroe was very particular about her makeup and always used the same makeup guy?is subdued around her green eyes, making them large, almost to the point of panic.

Marilyn Monroe is transformed; Sydney can’t take her eyes off her. Monroe’s chin is up, and she looks slightly down her nose at the camera, one eyebrow raised. She is a haunting beauty, sure of her allure, but cold, so cold, made up for the femme fatale role in Vertigo. The sexual energy that was all Monroe is banked, gone.

She could have done it. She would have been a fabulous Madeleine Elster.

The camera takes Monroe in, pulls back to a full-body shot, Monroe’s curves push against the linen fabric.

Then in the next shot, she’s Judy Barton, hair down but closely sprayed to tame the wildness, in a sweater set and makeup a little thick, like a shop girl would. This is what would have done her in for Hitch and Alma.

Because Monroe could never look like a cheap shop girl, like Novak could in the movie. No matter how much garish makeup they used, they couldn’t bury that Monroe glow.

Sydney’s heart races as the clip ends and she realizes that more than five minutes has gone by. For a moment, the room is dark, except for a soft glow coming from the projection room. Recessed lights high in the walls brighten things as they come on.

The projector whines as McCall rewinds the film. Dad stays in his seat, one finger running along the arm, slouched with an ankle on one knee.

“I can’t ever get enough of her,” Dad says to the blank screen. “If this myth were true, that Monroe staged her death and left to have a child, the child might have been me.”

Hearing Sydney’s intake of breath, Dad looks up at her.

“The timing is right. Violet was Monroe’s stand-in for lighting; you’ve seen Violet’s photos?same build, coloring; from the back she could be Monroe.” Dad’s gaze traveled away from Sydney’s face, back toward the screen. “If it were true, that Violet was Monroe’s body for the cameras, for the newspapers?Violet would know the truth about Monroe’s baby, too.”

“That’s bullshit, Dad, and you know it.” Sydney’s voice sounds harsh, but she’s beyond caring. Has Dad lost his mind? One too many glasses of wine or tokes of hash?

Giving her a sidelong glance, Dad shrugs. Then he uncrosses his legs and gets up, edges away from her, to the other side of the seats. McCall appears from the projection room, the film can in his hand. Dad stops in front of him.

“Time to give back what is mine, Mac. Sorry. But I need it.”

Sydney puts her hand on the door handle. Isn’t this what she came for, too? To get the film can back, to see McCall and confront him, hear his side of things? Get an apology for the texts? She could leave right now. Adam is waiting for her. He said he would wait.

But she lingers. Mac’s face is doubtful, a little startled, Sydney thinks.

“C’mon, Mac. Don’t make this hard. This wasn’t Willow’s to take and try to sell. It really does belong to me. I found it. I spent a lot of effort looking for it.”

Mac doesn’t move, except to put his other hand on the can as if to hold it tighter. “Yeah, it was hard, wasn’t it, fucking all those girls, getting them to help. Easy for a slick guy like you. Willow knew it. You remember my sister, Veronica? You couldn’t stay away from her, either. You told her all about the screen test, didn’t you?”

Sydney can see Dad stiffen, hear his breaths as his chest rises and falls. The legendary Wormley aplomb was starting to fracture.

And she feels sick inside, hearing this. Willow and McCall set his sister on Dad who would have been helpless to resist a pretty teen-age girl flirting with him. And Sydney’s nausea deepens as she wonders if it went further?deeper?than mere flirtation.

All thought of leaving vanishes. Dad just might get himself into trouble.

“I thought you could be reasonable, Mac.” Dad’s voice is shaking, just a little. Tight, like he is about to cry. “I need money, is the thing. I’ve got a new life to start, and a child coming, that I want to care for. My girlfriend, back in the Netherlands. We want to have this baby, and I need money. To set us up.”

If Dad is trying to appeal to Mac’s better nature with this sob story, Sydney knows it won’t work. Mac might have befriended Dad, but that was just to see what Mac could get for himself.

McCall shrugs. “I can give you money, man.”

“Dad, let’s get out of here. Jesus, we can get money a better way than this.”

Dad ignores her, and Sydney realizes she has said this thought aloud. Or has she? Her throat tightens. Can’t they hear her heart thundering?

McCall faces her now. “I have lots of money. I could have given Willow all the money she wanted. But it wasn’t enough. She wanted this big deal, to sell this can for millions.” His head moves back and forth, as if he couldn’t believe it.

In the silence, with only cooling-metal clicking noises and the soft whir of a fan somewhere, Sydney feels sorry for both of them. They are pathetic, the two of them, selfish men, twisted around by their own narcissism. Adam isn’t like that at all.

Fuck this. Sydney puts her hand on the door, opens it, is halfway through when the crash happens.

Turning, she sees Dad and Mac grappling, the crash the noise of Mac slammed against the projection room wall. Dad has his hands on the can, but Mac isn’t letting go.

“Stop it! You idiots! This is crazy!” Sydney’s throat aches from the scream.

Mac twists his body, quick and agile, wrenching the can from Dad’s hands. Dad stumbles, almost falls, and Mac runs straight at Sydney.

Sydney tries to jump to one side as Mac comes toward her, toward the door, but pain spikes through her knee and she falls. Mac shoves her into the wall, pulls open the door which slams into her foot, and is gone.

Dad pounds after him. He stops for a moment, looks at Sydney on the floor, as if his fatherly duty tried to get his attention, but then he is gone, through the door and Sydney can hear him run down the hall.

Shit, shit, shit! Nausea sweeps through Sydney as her knee throbs, and her foot throbs, and she climbs to her feet, using one of the seats for leverage. She hobbles toward the doorway, each step sending a sword through her knee but she keeps moving, her throat acid with vomit, fear tunneling under her ribs.

Just as she emerges into the main living room, a flash of white light on the deck outside, and a quick Pop! Pop! Pop!

Sydney collapses on the floor, her throat closing. That fucktard has a gun! He has a gun!

The silence is crazily ringing in her ears, buzzing. Don’t pass out, bitch. Stay awake. Do something!

Sydney begins to crawl through the living room. The dog is barking now, somewhere distantly, and the barks recede as if he’s racing away.

Carefully, Sydney pulls herself up, using the back of the couch, her legs like jelly. Oh god oh god just let it be OK let no one be dead.

Someone lay on the deck?she can see it through torn and crooked blinds. Her heart stops in her mouth, keeps back the bile climbing up. She hangs on to the sliding door, hands slippery with sweat.

Dogs are barking everywhere. And coming closer, barking. And someone running.

Shrinking back, Sydney shuffles behind the blinds. Hide, hide, he’s coming back to finish me off.

Footsteps pound up the stairs. A dog does appear, but it was not the white-faced Mac dog, it is a brindle; it’s Frank!

Frank barks, and the footsteps get louder as someone comes on the deck

Adam stops beside the body, kneels, peering at the face. He has his cellphone at his ear, and is speaking breathlessly to someone. 911 operator? Sydney can’t move, as if seeing Adam there pulls all tension from her muscles and paralyzes her.

Frank finds her just as Adam scrambles to his feet and starts for the house. Frank licks her face and when Adam sees her a breath goes out of his body, as if he had been holding his breath for a year.

“Are you hurt? Did they shoot you?” His voice was strung high and tight.

Sydney shakes her head. She looks past Adam, at the body lying there, and tears burn her eyes. “Is it?is it?”

She tried to say it but her voice is gone.

Adam kneels beside her, pulls her to him, arm around her, holding her tight.

Cold and warmth cycles through Sydney’s chest. Her knee makes itself known again, sharp sword cutting, and the tears thicken. Dad is alive. Dad is alive.

And then, a deep knowledge, worse and horrifying.

Dad killed McCall. My dad is a murderer.