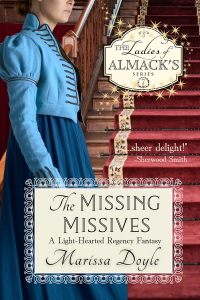 Blackmail is such an ugly word…

Annabel is part of the Ladies’ investigation of an extremely sensitive matter: the attempted blackmail of a member of the royal family. Meanwhile, she’s trying to help a lovelorn pigeon and discover why Lord Quinceton is suddenly shunning her and devoting himself instead to her fellow Lady Patroness, Frances Dalrymple. When the Ladies begin to suspect that one of their number might be leading a double life, Annabel wonders if all these circumstances might not be related…

The seventh installment in The Ladies of Almack’s series!
____
Marissa Doyle intended to be an archaeologist but somehow got distracted, so instead she excavates tales of magic and history from the matrix of her imagination. Or something like that. She lives in MA with her family, her research library, and a bossy pet rabbit. Visit her online at www.marissadoyle.com.

Buy The Missing Missives in the BVC bookstore

“What?” Annabel lifted her head from her still-damp pillow, blinking her swollen eyes in the early morning light. She had forgotten to draw the curtains last night—or this morning—before she’d dragged herself to bed to finish crying herself to sleep.

Oh, no. She sat up and glared at her windowsill. A large gray pigeon perched there, gazing around her bedchamber with great interest. “I thought Sally had replaced you all with the phantom footmen?” she said irritably to it.

The pigeon fluttered its wings and flew a few feet further into the room, perching on the back of a chair. “Gghrhurghr. Footmen wouldn’t come. You—ghrughr—look a gh-gr-wreck,” he added, turning his head to peer at her first with one dark, beady eye, then the other.

“Are you here to comment on my appearance or summon me to an emergency Lady Patronesses’ meeting?” And if she wanted to look like an absolute misery in the privacy of her own bedchamber, she would, confound it. She certainly had all the reason in the world to have cried herself to sleep last night after Quin’s cold—and very public—cut direct yesterday in the middle of King Street.

She winced at the fresh wave of shock and pain from the memory. After their kiss in Mrs. Bunwich’s parlour in Epsom, after what he had said to her there—after everything that had passed between them in the last few months—what had made him do it?

And why, just as suddenly, had his behavior toward Frances Dalrymple, her fellow Lady Patroness, undergone an equally radical change? Poor, homely, spinsterish Frances had chased him for years; he’d responded to her flirtations with bored civility or, more usually, thinly veiled contempt—when he’d noticed her at all. But no more; she and Frances might as well have switched places, for Quin had barely acknowledged her existence yesterday, while offering Frances every sign of regard. It had felt like a physical blow when Quin’s eyes had slid over her almost as if she wasn’t there—

“Ggghrrr!” The pigeon rustled his feathers peevishly. “I’m here—gghruhhr—to summon you, if you would—gghrur—pay attention.”

“I beg your pardon, but I had a very bad day yesterday.” Annabel reached for her wrapper—her old one, not the confection of ribbon and lace Mama had bought for her—at the foot of the bed. “Why couldn’t the footmen come?” She cast a suspicious look at the windowsill and floor beneath the chair where the pigeon perched, but both were unsullied.

“Wouldn’t—gg—come. Ignorrrhed the call.” The pigeon somehow managed to look somber. “Lady Ghr—Ghersey is most displeased.”

“I’m not surprised.” Sally loathed the garbled speech of the pigeons, which was why she’d hired the ghostly footmen—though this particular pigeon was unusually articulate. “Well, I am sure you have someone else to call on, so if you will be so kind as to tell me what time I am expected—”

He—how did she know the bird was a he?—shook his head. “No one else to tell. Ghr—tryinggg to tell you—this a prh-prrivate meeting. Not everyone there.”

“Oh.” That was interesting. Annabel knew that some investigations were of such a sensitive nature that only those Lady Patronesses chosen by Sally and Mr. Almack to conduct them knew about them. This was the first time she’d been called to one; a pity, as it was difficult just now to conjure much interest in anything beyond her own misery.

But that could not be helped: she was a Lady Patroness, and a summons could not be refused in any but the most extreme of circumstances. Not even being dead was an excuse, as Mr. Almack could attest. She rose, pulling her wrapper on over her nightrail. “Very well, then. Thank you. If you will excuse—”

“You’re to be at G-Gh-Khing Street no later than eight. Might want to ghr-rring for your maid.” The pigeon stood up taller and flapped his wings once or twice. “Should—gghrr—have breaggfast before you gggo,” he added hopefully.

The thought of trying to choke down anything, even toast, was singularly repulsive. But Winters would fuss if she didn’t have something sent up. That didn’t mean she would actually eat it; it was fortuitous to have a talking pigeon in her room who, it appeared, would welcome a snack. She went to the bell-pull. “Yes, but hide yourself when the chambermaid comes in, please.”

The pigeon fluttered up to the canopy rail of her bed and perched there, unmoving, while the chambermaid brought her hot water and promised to send Winters up with toast and strong coffee and to order down to the stables for her carriage to be ready for half past seven. Annabel bent over the gently steaming washbowl; a brisk interview with soap and water would hopefully wash away the ravages of a tear-filled night. But when she sat down at her dressing table and began to comb her hair, her reflection told her otherwise—as did the pigeon, now gazing down at her from the mirror’s frame. “Ghrr—not much better,” he commented.

A lump rose in her throat. The dratted bird actually sounded sympathetic. “Someone I know—I mean, I thought I knew—was not—does not feel as he led me to—as I thought he did.”

“Hhurr.” The pigeon dipped his head a few times. “Know hhow—ghr—how that feels.”

Annabel stopped combing. “You do?”

“Ghrr. My beautiful one—she of the deepest eye, the plumpest breast, the smoothest feathers—ghhrr…” His beak drooped. “She loved me once…but now loves me no longgher.”

The poor thing! Evidently even pigeons could be crossed in love. “What happened?”

“Ghr. Don’t know. Flew up to see her, in the park where our flock gh-goes in morning, and—hhur—she wouldn’t talk to me. Wouldn’t look at me.”

“Why, that’s exactly what happened to me,” Annabel said. Who would have guessed that she’d be spending this morning swapping heartache stories with a pigeon? “I wish I could help you. Does she, er, speak to humans?”

The pigeon nodded. “Gghr. Gh-got enchanted same time I did, while back. Used to summon you ladies too, same as others in our flock. Wouldn’t gg-go today, when order came.”

“How very odd. What do you think—oh, thank you, Winters.”

Annabel’s maid had just backed into the room, bearing a tray. She set it down on a side table and sketched a curtsy. “Your breakfast, ma’am. What do I think about—good heavens, there’s a pigeon on your looking glass!” She hurried toward it, flapping her apron. “How did it get in here? Shoo, you!”

Annabel put out a restraining hand. “No, it’s all right—he’s a friend.”

The pigeon flapped his wings back at Winters and muttered a rude word.

Winters’ jaw dropped. “Did it—did it just say what I think it did?”

“Quite likely,” Annabel said. “Though I would appreciate his not doing so again,” she added sternly. “He’s here to call me to a meeting in King Street.”

Winters, to her credit, only blinked once before saying, “Of course, madam. Shall I get out your blue walking dress?”

Buy The Missing Missives in the BVC bookstore