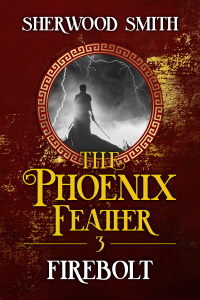 Inspired by the great Chinese epics such as Dream of Red Chamber as well as wuxia and xuanhuan TV series such as Nirvana in Fire, the four volumes of this story sweep from the imperial military academy to wandering martial artists, from the poetic duels of imperial courtiers to the everyday affairs of an innkeeper—and from the human world to the realm of the transcendent, before accelerating to a triumphant close.

In Firebolt, the third volume of The Phoenix Feather epic martial arts adventure, the Redbark gang has broken up, taking different paths. Muin is rising in the imperial army; Yskanda lives day to day in the silken prison of the imperial court, hiding among his paints until an eerie encounter changes everything.

Prince Jion returns to the imperial palace in disgrace. Ryu, tired of disguises, begins to cultivate her skills and talents as she finds her way back toward her old name and a new identity.

When she isn’t crusading as Firebolt—and causing hunters on both sides to come after her.

Dragon and Phoenix, the last book of The Phoenix Feather martial arts epic, puts the entire Afan family in action.

Once hiding on an obscure island, the Afan parents go seeking their children, as the emperor seeks them. Muin’s skills as a commander brings him to prominence in a terrible battle. Yskanda, imperial prisoner, transcends political boundaries through art—and comes to grip with his talents.

Prince Jion, once a powerless wanderer, comes into his own as his beloved Ari inspires the world as Firebolt, before the two of them together face the most terrifying enemy of all.

Read a Sample of FIREBOLT:
Of all those listeners inside and outside Madam Swan’s entertainment house, only Ryu understood ancient Imperial, and how the sinister imperial ferret Fai Anbai most unfairly staked everyone’s lives against their imperial prince’s. She was wild with anger and grief—but so tired after talking nearly all night, then only a brief sleep, that she stood there beside the window staring into the rapidly emptying square as everyone in the world burst into question and comment around her, mostly variations on, “What were the imperials saying? Why did they take away the dancer?”

“They went to their knees, did you see that?”

“He must be a runaway noble.”

“Why would anyone run away from riches and anything you want?”

“Who understands anything nobles do? Thank the gods it was his bad luck that brought the imperials down on his head, and not mine, that’s all I know.”

And everyone judiciously made signs warding bad luck.

Ryu roused when Madam Swan’s voice rose to an almost piercing level, “Oh, yes, that must have been the infamous Firebolt who left last night. I am so shocked! Why, if I had known he was so infamous, I would never have taken his custom. I have to think of the reputation of my house, you know!”

Buy The Phoenix Feather IV: Dragon and Phoenix at the BVC Bookstore:

Read a sample of DRAGON AND PHOENIX:

Ari smoothed her sleeves and robe, then checked that the front part of her hair was neatly bound up in its ribbon and hanging more or less orderly down her back in the style typical for young maidens. The only part of her appearance that might be amiss would be her battered martial artist’s boots, but the hem of her outer robe came down to the toes of those boots, and if she remembered to walk in small steps, surely no one would notice them.

It was habit to stride along, shoulders shifting from side to side, a walk she’d consciously mimicked at Loyalty Fortress while she lived in the guise of a boy, until it had become her normal gait. As a small child she had run everywhere, a shadow at her older brothers’ heels. She hadn’t learned to dress and walk like a girl until this year, and she still thought of the clothes and the walk as a disguise.

She hitched her pack higher on her shoulder and looked around. Ayah! She spotted a girl her own age carrying a basket, head bent against the sea breeze coming off the ocean, and imitated her walk. Smaller steps, balance point in the hips, all as Madam Nightingale had taught her. Ari minced her way past the central square, the Justice House, and up the grand street with the fine stores. Master Bankan’s scribe house was here, that much she remembered.

The street didn’t look so grand now. Though this was harvest time, and she had expected it to be much hotter so far south, the ship had finally landed after a series of violent thunderstorms. Puddles lay everywhere. The crimson of the year’s luck and fortune couplets still affixed to doorways looked tattered in many places. She skirted around a couple teens her own age wearing the aprons of apprentices, as they took down banners of Hungry Ghost Month.

She sketched hungry ghost wards as she passed, then forgot them all when she saw BANKAN HOUSE.

Would Yskanda be very tall? Might he even be starting a beard? No, he wouldn’t, if he was living among people of rank, she reminded herself as she mounted the stairs to the front entrance. Young men stayed clean-shaven till they married, or were appointed to their life’s work, whichever came first in their family tradition. She could not imagine Yskanda with a large, drooping mustache, and snickered nervously.

“Greetings of the day,” a girl her own age said from behind the counter, her gaze raking down Ari from braids to her wet hem and back up again. The blob of light around her shimmered and fluoresced until Ari impatiently blinked it away—at least she had learned to suppress seeing those distracting lights around people.

With the aura gone, Ari mentally followed the counter tender’s gaze, assessing her own appearance: dark brown hair, blob face dominated by a pair of fuzzy caterpillar eyebrows, plain-woven rose-colored robe edged with magnolia blossoms. Hopefully she did not notice the travel pack Ari carried over one shoulder, with wrapped implements sticking up that could be anything—but were, in fact, a very old sword and the two halves of a fine fighting staff made by Ghost Moon monks. Ari had sketched deflection wards on that pack and on the weapons as well.

The counter girl’s expression reflected her assessment of Ari: not noble, which would require service obsequiousness, but not a beggar to be booted back out, either. “What service do you seek?”

“Greetings,” Ari said, consciously going back to the local dialect. For all these years she had been speaking the common version of Imperial, first the military dialect, and then that of the gallant wanderers. “I’m looking for my brother. He should be in his last year or so of apprenticeship. Or maybe you could tell me where he is, if not.”

The counter girl’s eyebrows shot upward. “Afan Yskanda?” she repeated, and her complexion changed as she said, “Please honor us by waiting a moment while I fetch the master.”

Read more about this series and Sherwood Smith’s other books at Book View Cafe: