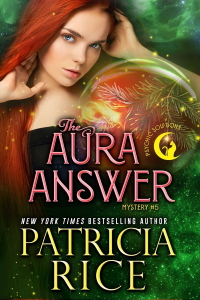 The Aura Answer
Psychic Solutions #5
Patricia Rice
Blend holiday sugar and spice with a heaping spoonful of angry ghosts, then bring to a boil with one psychic detective…

Ghost talker Evie Malcolm’s family converges on her eccentric Victorian home for a warm and welcoming family Christmas, but the murder of a former mayor requires that she investigate his cranky ghost.

Evie’s quiet schoolteacher sister Gracie reluctantly becomes involved while trying to help the family of a homeless artist who died weirdly in the same courthouse as the mayor. An offer by a sexy Brit marketing expert to help Gracie frame the late artist’s sketches appallingly evolves into another murder when they reveal the late mayor’s corrupt business dealings.

While timid Gracie lusts after the handsome Brit, and the rest of the family descends into the holiday excitement of decorating and baking, Evie is suffering spectral burn-out from dealing with a mounting list of ghosts. But what she learns from her efforts tells her that if they don’t find the killer by the holiday, Afterthought is likely to be plowed under for a theme park in the new year—

“Look at this, just look!” Short, blond, and normally serene, Gracie flung a stack of colorful paperbacks on the plastic protecting the bed from slimy, shredded wallpaper remnants.

Evie was supposed to be the one with ADHD, not her cautious schoolteacher sister. From her perch on the ladder, Evangeline Malcolm Carstairs studied the cute covers of kittens and snow-covered houses with bloody knives on the porch and assumed they were cozy mysteries. Even a non-reader could work that out.

What did mysteries have to do with anything? Maybe Gracie wanted more for Christmas? Given that a tree had crushed the roof of her sister’s bungalow shortly after Thanksgiving, Gracie really didn’t have a place to put more books.

The house belonged to their aunt, but Evie had been appointed caretaker. The structure was genuine late 1800s, the décor, pure 70’s clutter. Living here alone since Val married and moved to Atlanta, Evie had never cared about the muddle. Except, this past year, her life had taken a few drastic turns, and more space was required. Someone had to take charge, and as chief dog walker and useless ghostbuster, she elected herself.

She hadn’t realized once she removed decades of old boxes and furniture that the walls would be quite so hideous.

Gracie—legally Grania Malcolm Carstairs Jenkins, but Evie’s self-effacing sister wouldn’t claim that grandiose moniker—pointed at the colorful books as if they were alive and squirming. “In every one of those books—the heroine inherits a house. What’s with this business of inheriting a house from complete strangers or unknown family members? Maybe we should look for bones in the attic and write about them!”

Evie sort of got where Spacey Gracie was coming from. Having to beg for housing from her dysfunctional sister in an already over-crowded household had upset Gracie’s tidy, home-loving Cancerian nature. Gracie wanted to be snuggled up in her neat little bungalow for Christmas.

But Evie wasn’t much of a reader, so she dismissed the rant. “I think we have to knit or bake to qualify as book detectives.”

“Or renovate old houses!” Gracie shouted, gesturing at the paper-pocked walls. “Pris bakes. I sew. That ought to count. You can renovate the house.”

“Thought that was what I was doing.” Evie studied the half-stripped wallpaper. Whoever had put the stuff on meant it to last forever. “Aren’t those books all about librarians dropping dead because the mayor wants to turn the library into a nightclub. . .”

Oh right. Evie had already had former Mayor Block arrested and thrown in jail on land fraud, after she’d uncovered the murder of her ward’s parents by one of Blockhead’s contractors. But she was the furthest thing possible from a librarian.

“Fine. You can be my Watson. Write my stories. Make me pretty and smart and sound like I know what I’m doing. You have over two weeks of Christmas vacation to do it in.” Evie put down her scraper when her phone warbled “I Got You Babe.” Everything in this house was old, including the ring tones.

Jax didn’t even greet her. “You’d better come down to the courthouse and persuade your mother to picket somewhere else. There’s an ugly counter-protest group gathering, and some of them are armed. Apparently Block has called a news conference.”

Normally, Jax’s voice thrilled Evie to her toes, even after all these months together. But this was her fiancé’s angry, frustrated lawyer voice. She vaguely recalled he was representing the current mayor in some war over zoning and licensing at the courthouse today, and her mother was supposed to be there supporting their cause. Mavis had her reasons for getting involved, although they tended to be more emotional than logical.

Why would former Mayor Block be holding a news conference? Shouldn’t he be in jail? Irrelevant, Evie, focus.

“If Mavis has the whole coven with her, I’m unlikely to be much influence, unless they’re singing Christmas carols,” Evie warned. “I can kill a carol in two minutes flat.”

Her mother’s friends weren’t actually a coven. Malcolms might be called witches by the ill-informed and superstitious, but her family simply had extra abilities others didn’t recognize as normal. Evie saw ghosts. No witchcraft there. And the people who frequented her mother’s Psychic Solutions shop for herbal remedies and tarot reading simply had different fantasies than men like the former mayor with his delusions of power.

Labeling her mother’s friends as libtards and tree-huggers for protecting a pond and family cemetery from development might be a stretch, but the coven did consider their job of defending nature seriously. The mayor had paid the price for seeing dollar signs and ignoring angry constituents.

Poor Jax had spent his teenage years in city suburbia, with normal parents and country club memberships and yachts. He was still adapting to Evie’s rural neighbors.

“No Christmas carols that I hear.” Jax sounded decidedly not merry. “Even the bell ringer stopped. I can’t see if one of the guns held him up.”

“Protesting zoning with guns seems a little. . . out of context?” she suggested, hoping he was exaggerating.

He sighed in exasperation. “Judge Satterwhite chose today to consider your ex-mayor’s plea to be let out on bail on some sort of holiday leniency. Judge Rhodes is hearing Larraine’s zoning case in the other courtroom at the same time. If I were paranoid, I’d call the timing collusion. The conspiracy nut-jobs are still screaming that Larraine stole the election. These aren’t just local loudmouths, and this really isn’t about zoning. Pry Mavis and her friends out before someone is hurt.”

Oh crap, if the mob wasn’t about zoning, it was about hating on their new Black transgender mayor. Former mayor Block might be a thief, but he was white and male. Of course all the rubes wanted one of their own back. Evie started down the ladder. “Mavis knows things. She must have known the crowd would turn ugly. She’s not protesting, she’s standing guard over her soul sister.”

On the other end of the line, Jax cursed more colorfully than she did. “The sheriff doesn’t have enough men to hold back a mob. And I don’t think a lot of old people waving signs will help.”

Holding the phone in one hand, Evie swiped sticky paper off her overalls with the other. “I’ll see what I can do, but your best option is smuggling Larraine out. Mavis and Company will follow her.”

“We’re working on it, but there are news crews all over—Larraine, get back!”

A loud crack sounded through the phone before the line went dead.

That crack had sounded an awful lot like a gunshot.

“Jax?” Alarmed when she received no answer, Evie shoved her phone in her pocket and rushed for the door. “Riot in progress. Gotta go. You can be the renovator who solves mysteries,” she shouted back at her sister. “I don’t have time.”

“You have wallpaper in your hair!” Gracie shouted back.