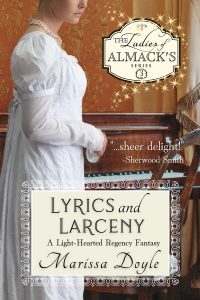 Can the Ladies of Almack’s play Cupid to a very odd couple?

Annabel’s cousin Hartley has been shaken from his self-absorbed ways by Demetria Pouli, a bewitching Greek soprano who is taking London by storm. When a rash of jewel thefts seems to accompany her recitals, Annabel fears Demetria may not be what she seems. As it happens, she isn’t—but a happily-ever-after for Hartley and Demetria isn’t necessarily out of the question, thanks to the Ladies of Almack’s…

The Ladies of Almacks series #3
____
Marissa Doyle intended to be an archaeologist but somehow got distracted, so instead she excavates tales of magic and history from the matrix of her imagination. Or something like that. She lives in MA with her family, her research library, and a bossy pet rabbit. Visit her online at www.marissadoyle.com.

Buy Lyrics and Larceny in the BVC bookstore

Emily Cowper was a darling and her dearest friend. Nevertheless, on occasion she made Annabel Fellbridge want to shriek.

Like right now, for instance. Here they were, comfortably ensconced in the library with a tea tray and a plate of Annabel’s favorite rout biscuits and her cook’s special macaroons, ready for a delightful gossip. Annabel had just told her about her last encounter with the Marquis of Quinceton on Tuesday after they’d confronted the author Mr. Gilbert Marjoribanks over his unscrupulous summoning of a demon to steal another, more popular author’s books…and Emily looked as though she were about to nod off.

“What do you think he could have possibly meant?” Annabel bit into a rout biscuit and chewed thoughtfully. “It was the most extraordinary thing, hearing him recall all the particulars of my betrothal party and exactly what I was wearing that evening. Disconcerting does not begin to describe it. Why should he remember that in such detail?”

Emily sat with her feet curled under her in a corner of the shabby brocade sofa. “Why shouldn’t he?” she said.

“But it was nine years ago! Doesn’t it strike you as somewhat odd?”

“Not particularly.” Emily actually yawned. “If it troubles you so much, why don’t you ask him why he remembers it so well?”

“I could never do that!”

“Then stop worrying about it. Really, Annabel, when it comes to Quin, sometimes you’re positively gothic. Are you certain that you don’t have a secret tendre for him that you just won’t admit? He was looking particularly handsome the other day.”

She laughed. “With that kind of response, I may just assume the answer is ‘yes.’ Speaking of handsome men, how was your drive with Lord Glenrick this morning?”

Annabel smiled. “It was very pleasant.”

She had made Lord Glenrick’s acquaintance just recently—she had a lot of catching up to do after her years away from London—and couldn’t help being flattered by his very marked attention to her. He was heir to the duchy of Carrick after all, and (as Emily said) was charming and good-looking, so how could she not be flattered? If only Lord Quinceton had not warned her off him without explaining why she should be wary of him…oh, why did the infuriating man have to intrude into every thought—

“Very pleasant? Is that all you have to say?” Emily made a sound of mock exasperation. “Details, woman! I want details! Did he look down your front?”

Annabel inhaled a crumb of rout biscuit and broke into a fit of coughing. “Emily!” she said when she could breathe again. “Is that all you think about?”

“I was wearing a spencer and a gauze scarf.”

“Oh, you tease. He’ll have to wait until the next ball, then.”

“Actually, he invited me to the opera on Tuesday.” Annabel was surprised to feel her cheeks warm just a little. Good heavens, she was as bad as a girl in her first London season!

“Did he? That’s excellent. Take care that you don’t disappoint the poor man—wear something to give him an eyeful. It would be great fun to be able to call you ‘Duchess’ someday.”

Annabel was saved from having to reply to such an absurdity by Hanscomb’s discreet knock on the door, followed by Hanscomb himself. “Excuse me, madam,” he began. “Your—”

He was abruptly set aside and the door thrown open as a young man with a headful of untidy gold curls bounded into the room. “Yes, of course she’ll see me, Hanscomb. Be a good old thing and push off, won’t you?”

Hanscomb’s face remained perfectly impassive, but Annabel winced for him. “Yes, thank you, Hanscomb, I’ll see this scapegrace—who really needs to learn some manners,” she said.

The youth halted, his face contrite. “Oh, I say—was I rude? I beg your pardon, Hanscomb—I’m just in a tearing hurry to see my best cousin. You’ll forgive me, won’t you? For old times’ sake?” He turned a smile—half cajoling, half pleading, and wholly charming— on the butler.

The perfect impassivity of Hanscomb’s face relaxed somehow without really changing. “If I may be so bold as to say so, you always could wrap the world round your little finger, my lord. Shall I bring up more tea, madam?”

“No, this will do us just fine,” the young man said cheerfully, eyeing the plate of biscuits, then noticed Emily. “Oh, hallo, it’s you. I know you, don’t I? Seen you around, at any rate.”

Annabel nodded her dismissal to Hanscomb, waited until the door had closed behind him, and turned to the young man. “Hartley, I don’t care if you’ve known Hanscomb forever—you simply can’t behave that way with him. And what are you doing here? I thought you were up at Cambridge.”

“I was. But I’m here now.” Her cousin Hartley, Viscount Mompesson, plonked himself down next to Emily on the sofa, strategically in front of the plate of biscuits, and attacked. “I have to talk to you, Annabel,” he said around a mouthful of macaroon. “You’re the only one who’ll listen.”

Emily raised an eyebrow. “Should I assume that you won’t want me to listen as well?”

“Hmm? Oh, no, you’re all right. You can stay if you like.” He took another two macaroons, sat back against the sofa cushion, and sighed. “It happened, Annabel. I never thought it would, but it did. I’m in love.”

“Oh.” Annabel sat back too and stared at him. Hartley was the son of her Cousin Medea—Lady Mompesson—and had inherited the title on his father’s untimely death last year. As the only son after five older sisters, he’d been coddled and indulged all his life; miraculously, he hadn’t turned out insufferably spoiled—at least not too much. He’d been saved by being a bookish boy, obsessed equally by the Greek poets and by the study of birds. He’d excelled at Cambridge, earning a first in Greek last year, and had been determined to remain in his college as a junior don, flatly refusing to submit to the course of balls and house parties his doting mother had planned to find him a bride worthy of him.

She should not have been surprised at his reluctance; Hartley had always scorned society in general and girls in particular. Annabel knew he only liked her because she hadn’t been afraid to climb trees with him to study birds’ nests on summer visits to his family’s estate in Cornwall. Though he’d managed to acquire some amount of social address at university, he’d never been comfortable with the female sex. Annabel had fully expected him to remain a confirmed bachelor, happy with his Hesiod and Pindar and collection of stuffed songbirds.

“That’s splendid news!” she said. “Do I know her? Your mother must be delighted.” Though delighted and Cousin Medea weren’t words often uttered in the same breath—

He shook his head. “She isn’t,” he said frankly. “That’s the problem. You’ve got to help me bring Mother around.”

Oh dear. Hartley hadn’t fallen in love with a tavern wench or someone completely inappropriate, had he? “Bring her around?”

“Yes. She’s got some idiotish notion that Demetria isn’t good enough for me. Just because she’s a singer—”

“Demetria? You don’t mean Demetria Pouli, do you?” Emily put in.

Hartley turned to her, his face alight. “You know her?”

“I know of her,” Emily said cautiously.

“Who is she?” Annabel asked.

“You haven’t heard? She’s a soprano from Greece, and everyone’s trying to book her for concerts, but she’s terribly exclusive and will only sing if she thinks she’ll be appreciated. Oh, and no one less than an earl need apply. From what I understand, she’s good enough to get away with it.” Emily sat up, warming to her topic. “I keep hearing descriptions of her like ‘unearthly’ and ‘heavenly’ and ‘spell-binding’.

“It’s nothing more than the truth. And why should she sing for just anyone?” Hartley put in hotly. “Most of London can’t tell the difference between her and a street-vendor calling his wares anyway. Annabel, she’s…she’s an angel. Not just because of her voice or her looks, though she’s the most beautiful girl I’ve ever seen. But she’s the sweetest, kindest…and she understands me. We can talk about poetry because she knows it all and loves it as much as I do.” His eyes softened. “Do you know, she sang a robin onto her hand when we went walking in Green Park, and it perched there on her finger, completely unafraid. Even the birds love her.”

“Does she return your sentiments?” Annabel asked carefully. Hartley sounded serious—more serious than she’d expected. But if this girl was just on the catch for a rich husband—

“I—I think she does. I’ve told her how I feel, as well as I can without frightening her—” He jumped up from the sofa and began to pace. “You don’t understand—she’s like a bird herself, so timid and shy—she’s just nineteen and far from home. I know what you were thinking, and she’s not some brazen hussy on the hunt. She’s the most modest little thing ever—a regular nun. I don’t think I’ve even caught a glimpse of her ankles.”

Well, that put a slightly different complexion on the matter. “What about her family? Does she have any?”

He threw himself back onto the sofa next to Emily and gave a mirthless laugh. “Far too much, as far as I’m concerned. There’s an uncle—he’s her guardian, and a brute, I expect, despite all his bowing and scraping. Some aunts or great-aunts or something—all draped in black so you can scarce see if they even have faces—who are her chaperones. The only way I was able to take her walking was because I slipped ’em a few guineas so they’d walk ten paces behind us instead of between us. And servants, too. They all follow along in her wake when she so much as sets a toe out of the house, like a damned chorus.”

Buy Lyrics and Larceny in the BVC bookstore