The Chronicles of Nuala#3

Poised between empires, the people of Nuala are survivors. They have fought the deadly radiation levels of their world, battling frightening mutations and genetic shift. An Axis Empire soldier is about to marry a Nualan princess. But there are those who would kill to keep an Axis warrior from marrying a Nualan . . . and those who think it’s the perfect smoke screen to keep anyone from noticing where the border is about to shift.

Nuala means survival. Survival against all odds, all enemies, all fortune. They’re going to have to prove it.

“much upheaval, much intrigue, and much romance. . .a particularly fine mix.”
-LOCUS Magazine

In the beginning Katharine Eliska Kimbriel was nominated for the Campbell Award for Best New SF/Fantasy Writer. Kimbriel is known for her literate, character-driven SF and Fantasy. Her novels include the fantasies NIGHT CALLS and KINDRED RITES From HarperPrism, and SF novels FIRES OF NUALA, FIRE SANCTUARY, and HIDDEN FIRES.

“Assassin takes king of spades. King of hearts to edifice, queen of hearts to crown, king of clubs to ascendant,” the computer droned as it made its move. The duty officer winced visibly as his king was toppled from the peak of the pyramid.

Lyte did not allow his smile to reach his face. The computer’s programming for edifice was elementary, and it played scarcely at an intermediate level. Knocking off the edifice card in the second round merely to introduce a pretender in the last tier was poor strategy—but then computers had trouble with edifice strategy. It was too erratic a game for a machine, a fact that kept living, breathing dealers all over the republic in constant demand. Although this move put the computer’s high card into the heir’s position, it placed Lyte at edifice and ascendant—strong positions so early in the game. The duty officer, whose name Lyte did not remember, was in trouble.

Of course, the idiot had probably figured out his error two days ago, after the first three-hour session of cards. His anticipated “easy” opponent had turned out to be a professional gambler. Fortunately for Lyte, the man was too proud to admit he was overmatched, and the equivalent of a fourteenday’s pay glittered on the divider between them. Lyte’s sympathy had dimmed long ago—the officer was arrogant, almost contemptuous of his two passengers. I would cheat to beat you, fool. If the Nualans hired you to prove they don’t discriminate against non-Nualans, they went too far….

The 3AV hologram to his right winked at him, drawing his attention. It was frozen in its hold mode, waiting for instructions. Allowing himself a languid stretch, Lyte punched the promotion tape back to its beginning. Noticing his distraction, the duty officer visibly searched for a good move, his nostrils twitching in agitation. Lyte wasn’t worried; he probably didn’t have a good move. Time to finish this hand and start another; he was getting bored, and that shouldn’t happen in edifice.

“Pass,” the man finally said, his nostrils now fluttering frantically. The contrast of his nervous tic with his excessively thin face was laughable, but Lyte controlled himself as he requested another card. Jack of pretenders—not worth much. He slid it under his other card.

All hail the biggest pretender of all, he thought wryly as the computer bumped his pawn pretender and slid the king of diamonds into the bottom tier. Four cards now computer controlled—time for an assassin card to turn up. I am the pretender, the biggest pretender. Gods, Moran, hasn’t it occurred to you once that I’ve previously avoided Nuala like a plague? That I’d stay on base and hustle dice before I’d take my leave there, even with you? Gods, you’d be lousy in the tratores—they’d read you like a signpost and take everything you had.

The tape began once again. Lyte watched it with one eye, his professional card sense taking over the game. He’d memorized this tape, of course, as he had all the others, but they had not told him enough. Even Moran couldn’t really tell him enough. After all, the man was smitten by that Nualan princess, incapable of remembering the terror the word Nuala conjured. “If you ever were afraid …” Lyte muttered aloud.

“What?” The duty officer jerked, as if startled.

“Nothing,” Lyte said, wondering if the little man was trying to figure out a way to cheat. Damn, why did the Axis tapes have so little information about Nuala? As if the Axis tried to forget the colony existed. And this was basically an assignment; he couldn’t afford gaps in his knowledge. Moran had been forthcoming but simply hadn’t understood his friend’s concern. Lyte glanced away from the 3AV toward his dozing partner. Moran always looked very peaceful when he slept, his smooth, classic features more appropriate for an artist or an entertainer than for a warrior of the Axis Forces. But his temper never showed through when he slept. Years ago, before Moran had taken classes in control, Lyte had seen his friend almost kill a man with nothing but his hands. Moran had learned the reason for his outbursts, and his temper rarely showed through; but unlike others, Lyte never made the mistake of thinking this tranquil, soft-spoken individual was an easy mark. Not since you pounded me into the ground for that prank I arranged on your twelfth birthday.

“‘My other half, dark to my light, but I am the darker brother,’” Lyte quoted, running his fingers through his own silver hair to straighten it.

“Are you playing or not?” the duty officer snapped.

“Are you passing?” Lyte responded mildly, fixing the man with a frost-tipped gaze.

“I passed.” It was muttered—they were playing strict edifice, which meant no discard, only three cards maximum. He was probably holding pawns and jacks.

Lyte drew a card. Another jack; gods, was the deck rigged? Maybe after two days of losses the guy was getting desperate.

The computer chose to draw and apparently didn’t like its card. “Pretender queen removes jack of diamonds, pawn of hearts enters,” it droned. The duty officer could not control a strangled gasp. The jack had been his last card in the pyramid.

“Can you do anything?” Lyte asked, ready to toss in his cards.

The man tossed his onto the small pile in disgust, punching the machine for another game. Lyte raked the cubiz to his side of the seat separator. Nearly five hundred cubiz—yes, this was close to a duty officer’s salary.

“Double or nothing?” the man suggested quickly.

“Where’s your stake?” Lyte countered. The man reached for the computer keys, and Lyte added, “Cubiz only. No credits.”

“A regular game, then.” The other sighed, sneaking a glance at Moran as he pulled out a handful of cubes. Lyte could not help but smile—the fool had actually nudged Moran awake once to cut off a game he was losing. Not this time. He was too far away….

Lyte watched without comment as the computer once more dealt the cards, sliding them across the smooth seat separator with precision. The duty officer’s face lit with pleasure, and he placed his first card, the queen of diamonds, at the edifice spot. Grimly amused, Lyte placed his king of clubs directly below and to the right, in the heir apparent position. The computer took ascendant with the king of hearts, and then Lyte lost interest.

Nuala. He was going to Nuala, the enigma of the stellar system, the only populated radioactive wasteland, the—Stop it, fool. His unease surprised him; he had visited many dangerous planets in his time. Perhaps it was knowing that Moran intended to marry one of the natives. Or maybe it’s because an assassin stalks us … and I fear to find out who did the hiring….

“Where do I get the radiation pills I have to take?” Lyte casually asked the duty officer. Startled, the man looked up from the board. Lyte gave the cards a glance; he’d probably assassinate the computer’s king of hearts, moving his king to the ascendant position.

“Of course not. I always take my vacations on transport ships.”

It took the duty officer several moments to realize Lyte was being sarcastic. The man slowly flushed. “We rarely carry non-Nualans…. They change you—the pills, I mean. So the food won’t make you sick. I’ve never taken them, I eat ship food. But whoever meets your party will probably bring them. Your hotel guide or embassy rep.” The man dropped the ace of diamonds on the computer’s king and slid still another king into the tier.

So someone from the palace would bring the pills to him. He decided not to mention their connections—apparently this ship had never carried Moran to Nuala. He studied the board. The duty officer had four of the seven slots. Time to shake him a bit. Lyte pulled out his ace.

“Assassin takes king of spades, queen of clubs to ascendant, jack of pretenders enters.” This time Lye allowed himself a slight smile. The guy would go crazy trying to figure out why he didn’t take the edifice. The hand was young….

Be the first to review “Fire Sanctuary” Cancel reply 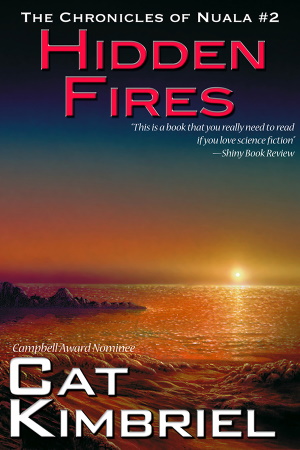 Two misplaced quests explode into a conspiracy of death, treason, and abduction. 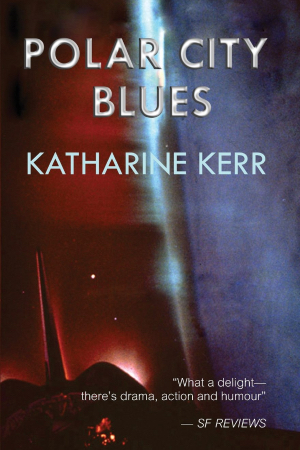 A tribute to classic SF from Katharine Kerr