So You Want to Commit Novel: The Million Word Myth 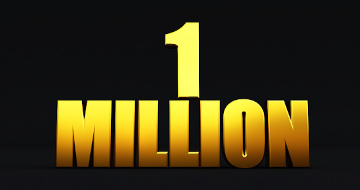 So You Want to Commit Novel: The Million Word Myth

Originally published in 2010 by Irene Radford

The million word myth has been attributed to Henry James, Larry Niven, Virgil, virtually every well known author you can think of.  Mumblty mumble years ago (my gosh was it 20?) I heard this as “You have to write a million words to learn your craft.”

Five years ago I heard it as “Once you’ve written a million words everything falls into place and you can sell everything you write.”  I think some people want to be able to take a pill that magically bypasses the learning process, just like we all want a pill that will melt away 20lbs of fat without changing our diet and exercise.  They have changed write a million words to type a million words.

A million words of writing drek, or blindly typing other peoples’ words, produces drek or someone else’s words.

The idea is that you have to practice your craft, hone it, study it, revise it, and learn.

Madeleine Robins reports that her daughter’s ski instructor told her she had to fall 100 times before she could expect to ski.  I see that as permission to fail as long as you learned why you failed and how to correct it.

When I proposed this topic on a couple of professional writer email lists, one respondent asked if I meant original words or revised words.

I talk to unpublished writers at workshop.  One student  wrote story after story and novel after novel without ever showing his work to anyone, not a critique group, nor his mother.  Heaven forbid he should have the audacity to submit anything before he’d written his million words.  Then he wouldn’t need a critique group or an editor to tell him what was wrong.  Sigh.

Then too, there’s Chaz Brenchley, Madeleine Robins, Nancy Jane Moore, and others who sold the first thing they wrote at a young age.  Then they found themselves constantly practicing and learning to keep up as markets changed, readers demanded something new, editors moved from house to house and their replacements like a different style, a different subject matter, their own authors that they brought with them.

Nancy Jane Moore took this a bit further in her own essay.  “There are those interesting ideas about deliberate practice. Writing a million words might be the writer equivalent of the idea, that it takes 10,000 hours of work at something to achieve a level of mastery, which Malcolm Gladwell talks about in Outliers.

“But even if you do the kind of writing work that leads to mastery for those million words or 10,000 hours—it can’t just be a mindless practice—there are also the other things Gladwell talks about: the odd advantages that give some people an edge, being at the right place at the right time. And as he says, nobody gets there alone.”

10,000 hours of practice adds up to about 5 years, 40 hours a week, 50 weeks a year.  That’s what I needed to make my first sale from the day I decided to take my writing seriously.  Before that I’d written 5 novels and I don’t know how many short stories that will never see the light of day, but I always wrote in the closet.  I worked hard during the years after I made the decision, writing five years much more than I had written secretly over a 20 year period (I literally started at the age of 8).  My first sale, “The Glass Dragon” by Irene Radford took over 10 drafts.  Not all of the words were new by the time I sent a finalized copy to my editor after her requested revisions.  But every one of the 100,000 words in that book had been written, viewed, and reviewed.  A lot of them were rewritten, multiple times, until I found the right combination to tell my story.  I learned a lot writing that book.

And during the two years it made the rounds from editor to editor before selling, I wrote 3 other complete books, revised them many times, and sent them out.

Since October 13, 1993 (at 1:33 PM) I have managed to have 20 books published.  Number 21 will be out in February 2011, Number 22 is scheduled for June 2011 but I have not yet done final revisions for the editor.  Number 23 is about ½ done in rough draft stage.  And I have proposals out for other projects.  I’ve written 2 unpublished novels with a collaborator.  And then there are the 20 or so short stories.  I’m still learning.  I still get rejections. [Editor note: she is still churning them out. See her production in the BVC store!]

I still feel like a newbie because even though I probably have 3 million words or more in print, I have to approach each and every manuscript as a new challenge, figure out new ways to get it right, find the right market for it, and keep my fingers crossed.

My advice about that first million words of practice?  Do it.  But don’t stop there.  It’s a goal, not a benchmark.  If you have a project that feels wonderful before you hit the magic number, go ahead and submit it.  You never know, the editors may find it wonderful too.  Join a critique group and get feedback.  Learn to revise.  Be prepared to keep learning.  The number of words behind you is no guarantee of success, only the words you are currently writing and revising are the ones that should concern you—unless you are actively marketing the previous works.

And a bit of luck or perfect timing never hurts.  The only way to learn to write is to write, pay attention to what you are writing, and make each project better than the previous one.

2 thoughts on “So You Want to Commit Novel: The Million Word Myth”