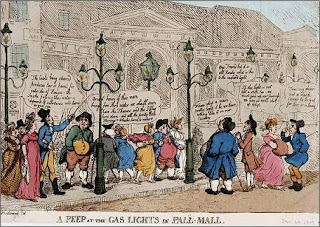 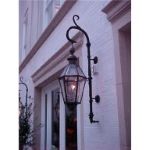 In the first of my posts on lighting a couple of weeks ago, we saw how the world depended on candles and oil lamps…and as a result, was a dim, rather dirty place; after all, burning oil creates smoke, which stains ceilings and walls and curtains.

Starting around 1807, though, London became a slightly brighter, if still smoky, place, thanks to a new technology and its fashionable champion, the Prince of Wales (soon to be Prince Regent and jocularly known as “Prinny”): gas lamps.

Early in the 18th century, amateur scientists observed that gases found in coal mines were extremely flammable and conducted laboratory experiments with them, but it wasn’t until late in the century that a Scottish engineer named William Murdoch paid serious attention to how flammable gases might be used commercially for lighting. In 1792 he fitted his own house with gas lights, and in 1798 outfitted the factory of his employer, the Soho Foundry steam engine works in Birmingham, with gas lighting. Notice was definitely taken and commercial attempts to utilize this new technology followed, along with engineering improvements, and at last in 1807 a German entrepreneur named Friedrich Winzer, who patented a coal-gas lighting system in 1804, arranged for a section of Pall Mall, one of the most fashionable streets of London, to have its oil lamps replaced with gas lights.

Most of the public was delighted with the new brighter lighting, which made being out at night a much safer prospect. So was the Prince Regent, who immediately commissioned Winzer to illuminate the façade of his London home, Carlton House, in 1808…and in 1810 Rudolph Ackermann’s print shop was lit by gas. One of William Murdoch’s colleagues at the Soho Foundry, Samuel Clegg, had also been inspired by Murdoch’s work and started the Gas Light & Coke Company, which in 1812 received a charter from Parliament (at Prinny’s urging) to provide gas lighting for the rest of London.

Soon, the new gas lights were everywhere: by 1813, Westminster Bridge had been fitted with gaslights. By 1815 there were 28 miles of gas piping under the streets of London, and Prinny had had gaslights installed in Brighton to illuminate the exterior of his beloved Pavilion (and had the interior gas-lit six years later). By 1817, the first theatres were lit by gas. Elegant lamp posts were created from the melted-down cannons used in the Napoleonic Wars to adorn the streets of the fashionable west end, some of which can still be seen in Regent’s Park and St. James’s. The lights of London became something of a tourist attraction; no other city in Europe would have anything close for years. Crime rates dropped as criminals no longer had the shield of darkness to conceal them.

Not everyone, however, was thrilled with this new form of light. The whale oil trade was aghast at what it saw as its imminent demise and lobbied hard against it, putting it out that the British Navy would be ruined if the whale fishery industry, from which the Navy recruited sailors, were curtailed.

No one listened; as of 1834, London had six hundred miles of gas lines for street lights alone, and gas lighting was fast spreading all over Britain. Gas was far cheaper than candles or oil lamps—as much as 75% cheaper—and soon factories were able to extend their working hours because of the cheap illumination provided by gas. The romantic—but dim—era of flickering candlelight was over.

PrevPreviousLet There Be Light
NextIs It Okay? No, But It’s OKNext