I Wrote a Letter to My Love 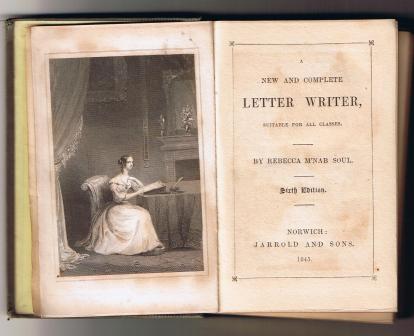 Who remembers writing letters—you know, sitting down with some stationery and a pen and being chatty or pouring out one’s innermost thoughts onto the page, then putting the results into an envelope and mailing it? I used to love writing letters; my husband and I each still have the letters we wrote each other mumbledy-mumble years ago when we were in college. I’m sure Rebecca M’Nab Soul and I would have gotten along like a house afire.

Rebecca M’Nab Soul was the author of an adorable little (literally little—it’s a dainty 3” by 4 ¾”) book called A New and Complete Letter Writer. I have the sixth edition, published in London in 1845. In her preface Ms. Soul states, “Of all the arts that have been discovered, and which have contributed to the benefit, refinement and happiness of man, the art of writing certainly ranks secondary to none; and of the varied species into which this art is modelled, there is none of greater utility and importance than the epistolary form.”

Okay, this probably sounds a little over-done to us…but think about it for a minute. How did people communicate when they weren’t face to face, like the pair of lovelorn college students that I mentioned in my first paragraph? Only in Ms. Soul’s day, it was even worse: there were no telephones in widespread use till very late in the 19th century, and no cellphones till more than a century after that. No computers, of course…and even the telegraph was only available well into mid-century and only for the briefest and most urgent communications. The only way to talk to your friends if they weren’t standing next to you was by letter.

And not only friends. Any business that wasn’t transacted face-to-face happened by letter…and here’s where Ms. Soul’s book comes in handy. It’s full of examples of letters to use in any situation, such as “Letter from a tradesman in distress, to his principal creditor, requesting time for payment” to “Letter from a young man wishing to commence business, to a rich relative”.

The most entertaining sections of the book, though, are the love letters.

Yes, love letters: Ms. Soul has examples of letters for (it seems) almost every romantic situation. How about a “Letter from a young lady to a gentleman who courts her, whom she suspects of infidelity” (“I desire to know, Sir, what sort of acquaintance you can wish to have with another person of character, after making me believe that you wished to be married to me.”)?

Or a “Letter from a lady to a gentleman, in answer to a dishonourable proposal” (“Had any part of my conduct authorized the infamous proposal you have had the audacity to make, I should die with shame; but my conscious innocence supports me, and teaches me to scorn your baseness.”)?

Or a “Letter from a gentleman to a young lady, proposing an elopement”? (“Distracted at the thought of not being enabled to accomplish my wish of making you my own, since I have exercised all the wit and ingenuity of which I am master, in endeavouring to elicit a consent from the impenetrable heart of my guardian, without effect; I am tempted to make a proposal, which from its hazardous and delicate nature, I am bound to preface with no ordinary caution, lest by too abruptly importing it, I should seal my own doom by the loss of her, for whom I would risk every danger to gain the possession.”)

Hmm. Probably a good thing my husband didn’t have a copy of this book, or we might not be married today.