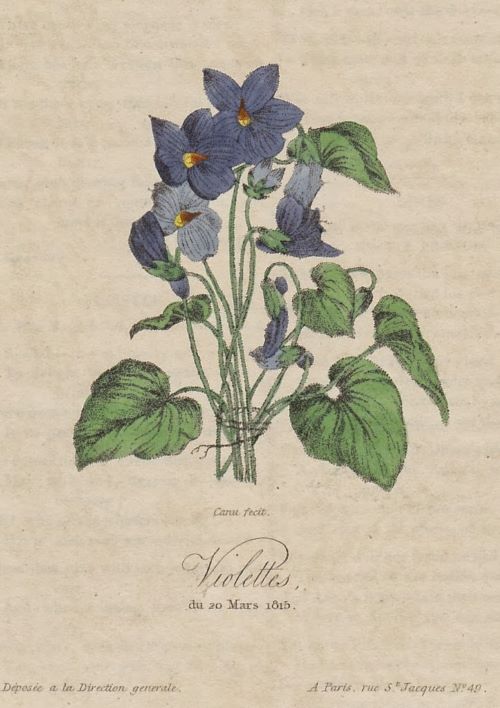 Violets. Aren’t they pretty? Such a charming picture to print—or rather, re-print in Ackermann’s Repository. The original image was a hugely popular one around France in 1814 and early 1815, so much so that it was quickly banned by the French government and continued to be so on and off for the next sixty years. What could be so controversial about an innocent bunch of violets? 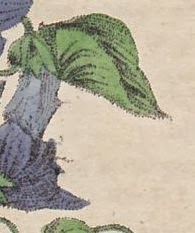 Look closely at the image, in particular the upper right hand side of it. Do you by chance see a face in profile there, with a distinctive (and familiar) hat formed by the folded leaf? Directly opposite it on the left side, do you see another one facing it? And between and below them, hard by the stems, is there a third, smaller one? They are Emperor Napoleon Bonaparte, his wife Marie Louise of Austria, and their three-year-old son. So what does Napoleon have to do with violets?
The story goes that after Napoleon’s defeat in early spring 1814, while he wrestled with whether or not to accept his banishment to Elba quietly, he was walking in the gardens at Fontainebleau and was given a bunch of violets by a child there. The emperor took it as a sign and declared that he would henceforth take the violets as his emblem and accept his exile meekly, like the shy and retiring violet. But the following day, while again walking in the gardens, he went to pick more of the flowers. According to an account in the Pall Mall Gazette:
The violets were rather scarce on the spot, and the grenadier Choudieu, who was on guard, said to him, “Sire, in a year’s time it will be easier to pick them; they will then be more plentiful.” Bonaparte, greatly astonished, looked at him. “You think, then, that next year 1 shall be back?” “Perhaps sooner; at least we hope so.” “Soldier, do you not know that after to-morrow I start for Elba?” “Your Majesty will wait till the clouds roll by.” “Do your comrades think like you?” “Almost all.” “They may think it, but may not say it. After you are relieved go to Bertrand and let him give you 20 Napoleons d’or, but keep silence.” Choudieu returned to the barracks, and drew the attention of his comrades to the fact that for the last two days the Emperor had been walking about with a bunch of violets. “We will call him among ourselves Pere la Violette.” From that day forth Napoleon was only called by that name in the barracks.
And as he prepared to set sail for Elba a few days later, he addressed the Imperial Guard: “I would embrace every one of you to display my affection, but I will kiss this flag, for it represents all of you. But know that I shall return to France when the violets will bloom.” After that, violets were all the rage. Not only did Frenchman carry little posies of them around: asking someone if they liked violets became shorthand for asking what their political alignment was. A yes meant you were for the return of the emperor; a no meant you supported the reinstated Bourbon monarchy. Copies of this image, with its hidden-in-plain-sight portraits, were all the rage as well, especially as more and more Frenchman became disillusioned with the reactionary and repressive regime of the new King Louis XVIII.
True to his word, Napoleon returned with the violets, slipping away from Elba under the noses of the British and landing in the south of France on March 20, 1815. Corporal Violet had returned, along with his namesake, though not for long…by June, both the flowers and the emperor were gone.