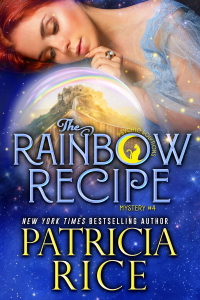 The Rainbow Recipe
Psychic Solutions #4
Patricia Rice
In the spooky town of Afterthought, Halloween is no time to die…

Psychic caterer Priscilla Malcolm watches in disbelief as a glamorous boutique owner drops dead at her Halloween party. Pris isn’t about to blame her appetizers, even if she knows the death isn’t natural. But when the victim’s ghost attaches to her ghost-busting cousin, Evie, she has no choice except to find out what happened.

While Evie’s Sensible Solutions team investigates motives for possible murder, Pris seeks the source of the boutique’s fame in Italy— coincidentally, the home of her nemesis, Dante Ives. Pris’s telepathic skills are limited, but while she searches for a heartless killer, she will need to call on every gift she possesses to deal with the handsome archeologist and the adorable twins his enigmatic ex dumped on him.

Knowing his past is the reason Evie is haunted now, Dante must join eccentric Pris and the anarchic Solutions team to solve the murder before Evie becomes the next victim.

“Beautiful people are brainless.” Priscilla Malcolm Broadhurst added the last smear of crab and caviar to a potato crisp and garnished the lot with dill. “Brainless people have no minds to block.”

Repeating that mental refrain, she checked her blurry reflection in the stainless steel refrigerator door to make certain no strands of wiry hair escaped its thick layer of gel. No one could call her beautiful. But in honor of the occasion, she’d aimed for colorful and added orange dye to the natural white streaks.

She needed a kitchen of her own. This catering business was growing old.

Counting the dollars that tonight would add to her savings account, she heaved the heavy tray to her shoulder and practiced mental blocking. “Hate this, hate it, hate it,” she chanted under her breath as she shoved through the door from the ginormous company kitchen into the crowded lobby of Larraine Fashions.

The noise of a few hundred guests high on champagne and excitement inundated her senses. Mechanical witches cackled. Paper ghosts flashed before her eyes. How the Samhain had the nerds created those? Shouldn’t men with PhDs and engineering degrees have better things to do?

More earth-bound creatures in creative costumes milled and laughed and snatched glasses and appetizers from passing trays. The party was just warming up.

Larraine Ward, mayoral candidate and owner of this high-end clothing company, had invited every voter in Afterthought, South Carolina to her Halloween fundraiser, plus out-of-town sponsors and media.

The potential for impressing clients who could finally take Pris’s catering business to the next level didn’t unnerve her as much as the rising tensions and mental vibrations of a few hundred people jammed all in one place.

Wearing spectacles and a floppy witch’s black hat, her prescient Aunt Mavis lurked outside the door. “Block them, child,” she ordered. “You know most of the braying asses, and there’s trouble afoot tonight. You’ll need your wits about you.”

Pris had lived in Afterthought all her life, so yeah, she knew how to mentally block the braying asses. But so many people at once, combined with the unfamiliar fancy-schmancy gathering over by Larraine’s platform. . . She really didn’t need to know about trouble afoot. “Halloween brings the freak out. Should I avoid the Barbie dolls occupying center front?”

Most of the local attendees were sporting their favorite homemade costumes. Pris and her staff wore formal black and white. The Beautiful People by the podium flaunted clothing so elegant that they might as well be costumes in this crowd of farmers and small merchants.

“They’re my competition,” Mavis replied grimly. “If they represent the changes Larraine means to introduce to town, I may vote for Hank.”

Mavis adored Larraine and had encouraged the flamboyant designer to run for office. If her aunt was resisting change—her psychic vibrations must be almost as painful as Pris’s mental terror. And it wasn’t officially Halloween yet.

Cousin Evie arrived in time to catch the discouraging words. “La Bella Gente is not your competition, Mom. You sell herbal remedies. They sell olive oil lotion and soap. A high end boutique like theirs will draw shoppers from the city. They’re good for business.”

Financial advice from an orange-haired genie in purple diaphanous drapery was a little hard to swallow, but Pris added her reassurances. “I’ll wager the Beautiful People don’t own a single crystal ball or tarot deck. You’re safe, Aunt Mavis. And if I’m to stay employed, I should probably take this tray over to them.”

Jaw clamped hard, mentally blocking braying asses as instructed, Pris wove through the costumed crowd carrying her tray of gourmet appetizers, and focusing on Larraine’s VIPs. The men ranged in age and height, but they were all dark-haired and wearing expensive suits. The younger two had the rugged, square-jawed facial structure and poise of male models.

Oddly, for a boutique selling lotions, only one woman accompanied them. Tall, Hollywood-thin, the long-haired blonde in designer black wearing a fortune in ancient-looking gold around her neck appeared to be suffering from dyspepsia. Or maybe she was just drunk, since she kept clutching the arm of a shorter, older man. She occasionally smiled tightly at her entourage but didn’t appear to be enjoying herself. One of the men had apparently snatched a bowl of almonds from the buffet to offer her. If that was her supper, no wonder she was thin.

Pris frowned as the blonde took a large swig from a shot glass. For many reasons, her catering budget had deliberately allowed only champagne—a few expensive cases followed by increasingly cheaper sparkling wines.

She had not provided shot glasses or hard liquor.

Holding the tray over her head, Pris edged through the animated crowd while dodging dinosaur tails and vampire capes. Perhaps, if she learned the strangers’ wavelengths, she could block them. Did they speak Italian? That would help. She didn’t.

In testing her theory, she sought the newcomers’ vibrations. The first few intense spikes she received were basically incomprehensible except in terms of emotion. Despite their promotional material about their Italian origins, though, she caught a few distinctly Angle-Saxon curses.

The whole crew came off as anxious, when they should be relaxing and celebrating their introduction to their new neighbors. And maybe the woman was actually in pain. Someone seemed to be anyway.

Maybe she should sympathize instead of scorning them for their pretty faces. After all, it hadn’t been easy for these outsiders to set up a European boutique in a rural town like Afterthought. Half the town’s inhabitants considered all Italians—and most Yankees—to be fascists. The town council had been opposed to the newcomers on the general principle that all strangers were suspect—and like Aunt Mavis, they feared competition.

Out of sheer mule-headedness, Larraine Ward had bought a building for the boutique and rented it to the new company. That had been a risky move for a mayoral candidate, but Larraine was more invested in her agenda than winning elections.

It would be a shame if the strangers really were Mafia. They were emanating a lot of unhealthy vibes.

As Pris approached the newcomers, she decided the blonde’s smile had more to do with Botox than strained relations. Was this the one the newspapers were calling Lady Katherine?

A sharp-nosed woman she recognized as a Charleston reporter approached the group at the same time as Pris. The mental tension escalated. The blond lady grabbed a handful of almonds.

“Lady Katherine,” the reporter gushed. “I’m so glad you’ve finally agreed to an interview. Your lotions. . .”

Pris blocked out the rest of the sycophantic speech. Lowering her tray to offer her appetizer creations, she suffered an intense flash of panic, followed by a familiar image. Dante! What the. . .

Pulse pounding, Pris shot a quick glance over her shoulder.

Dante couldn’t be here. She’d have known it instantly. The uptight Indiana Jones wannabe gave off masculine vibes so substantial it was a wonder he didn’t cut a swathe through any room he entered. He’d returned to Italy weeks ago.

All she saw was her cousin Evie’s partner, Jax, in a stupid Sherlock Holmes deerstalker hat. Related to Dante, he had similar features but not enough to confuse anyone who knew them well. Taller and more suave than his American relation, Dante was an English-Italian archeologist who flew around academic circles. She didn’t think it possible for a fashion model to know him.

Lady Katherine seemed to be gasping for breath, as if in shock from what she was seeing? Still, she released her grip on the pendant and managed to help herself to Pris’s caviar.

Pris realized she should have asked Evie about the strangers’ auras. Out of sheer curiosity, she warily lowered her mental barriers a little more. Someone had very murky vibrations, but she couldn’t differentiate them enough to tell if they were male or female.

Cut it out, Pris, she warned herself. Concentrate. Her future kitchen depended on good reviews.

While the reporter nattered, Lady Katherine took another swig from her shot glass, then bit into her appetizer, practically inhaling the whole thing as if starved. Nothing delicate about this lady.

Pris passed the platter to the gentleman hovering next to the lady.

A rush of excruciating pain—followed by strong bolt of triumph—pierced her mental block. Pris staggered, the agony so intense as to be almost physical. Her tray tilted, releasing all her carefully created confections onto polished shoes.

To her horror, the blonde slumped to the floor, her shot glass rolling to Pris’s feet amid the caviar.